The Communist Party USA and Democratic Socialists of America have realized their mistake.

After working hard to elect their long time friend and ally, Barack Obama in 2008, the Marxists relaxed a little and waited for “change” to come. They didn’t figure on the level of resistance their programs would generate via Glenn Beck, the Tea Party movement and patriotic elements in the Republican Party.

Realizing that their socialist agenda hangs in the balance, the Communists and DSA are working overtime to re-invigorate the Obama coalition – both to counter the Tea Party and to keep the Democrats in power after the looming mid-term elections. 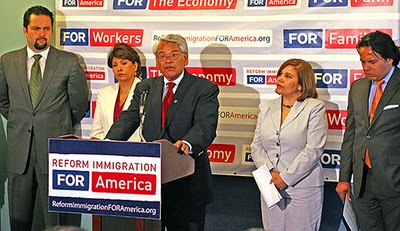 Discounting the obvious lies and propaganda, there is a serious message in this article on DSA official, Eliseo Medina, from the Communist Party USA’s latest Peoples World:

The 567 organizations and groups that turned out several hundred thousand people for the “One Nation” march in Washington on Oct. 2 will try to stay together to work on each other’s causes after the Nov. 2 election, a top union participant says.

In an interview with Press Associates during the march, new Service Employees International Union secretary-treasurer Eliseo Medina added that for many of the groups involved, it would mean “getting out of the silos” of their own causes.

The coalition, including SEIU, the AFL-CIO, AFSCME, the teachers, the National Nurses Union, the Communications Workers, the Transport Workers Union and many other national and local unions, got behind the march for two reasons.

One was to show that progressives can muster more numbers than the radical right tea party zealots of radio talker Glenn Beck and GOP politician Sarah Palin. They led a similar march at the Lincoln Memorial – site of the Oct. 2 rally – several weeks before.

The other was to energize the progressive forces for the final days of the 2010 election campaign.

Medina made it clear the coalition will extend beyond the election. “This is an exercise in power,” he explained…

Medina admitted that energy and enthusiasm among progressives had slacked off in the last two years, after the 2008 election brought Democratic President Barack Obama into office, accompanied by Democratic majorities in Congress – all elected with heavy labor support.

“There was such a sense of excitement in 2008. We forgot and left everything to Obama,” he said.

“But then we saw issue after issue – health care, tax cuts for the middle class, immigration reform – go down” to Senate GOP filibusters and obstructionism. The groups then “realized we had to do something, but organizing takes time,” veteran organizer Medina admitted.

The left knows exactly what is at stake here.

The Tea Party and its allies also understands that this election could decide the future of America forever.

The big question is – which way will the center vote in November?