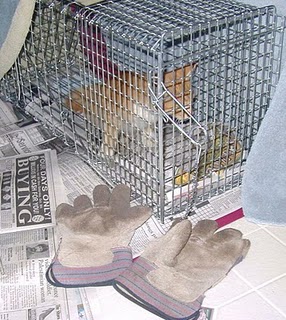 This past weekend was General Conference for the Church of Jesus Christ of Latter Day Saints. Thomas S. Monson, President of the Church, gave a talk on Sunday about gratitude. After reminding us of the lepers who’d been healed by the Lord, only one of whom expressed gratitude, President Monson continued:

“My brothers and sisters, do we remember to give thanks for the blessings we receive? Sincerely giving thanks not only helps us recognize our blessings, but it also unlocks the doors of heaven and helps us feel God’s love.”

“My beloved friend President Gordon B. Hinckley said, “When you walk with gratitude, you do not walk with arrogance and conceit and egotism, you walk with a spirit of thanksgiving that is becoming to you and will bless your lives.”’

Tonight I wish to express my gratitude for being able to catch the last female feral Hobo Kitty, Jaws. There must have been divine intervention. We’d captured Puddin’ Head earlier without much fuss and have her tucked away in the kitchen nook. We’ll transport her to the veterinarian early tomorrow to be “fixed.”

The hard one to catch was Jaws, who wouldn’t go near the traps we’d set. She escaped my clutches earlier and scrambled away. I had her for half a moment and I was glad I was wearing thick leather gloves, as she clawed and scratched with all her might, finally squirming out of my grip. She stayed out of sight for a couple of hours.

Later this evening I tricked Jaws by offering treats; something which caused her to forget her cautions. Treats were being distributed to all the Hobo Kitties, as we do most every evening. As she got closer, I tossed a couple of treats into the washroom, making sure to bounce them off the front of the dryer so they’d make extra noise. Jaws ran past the threshold and snatched up the crunchy morsels; but she was too far inside to beat the door being closed, I had her.

I went back into the garage and retrieved the heavy leather gloves; all the while Jaws was literally bouncing off the walls trying to escape. Lucy stood at the ready as I made sure to enter the washroom without letting Jaws get past, not an easy feat. Jaws jumped atop the washing machine, dryer and against the back door, climbed the walls and let out a terrible odor as she scrambled in vain.

A couple of times I latched on to her, but she put up such a fuss that I had to let her go; either that or crush her small body against the floor trying to hold on. I eventually got hold of her in such a way as to make it difficult for her hind legs to tear into anything other than the thick leather gloves. I had Lucy open the washroom door and I quickly deposited Jaws into the waiting cage. We’d won and if I didn’t express my gratitude for having the protection of a thick pair of work gloves then shame on me.

President Monson had another line which applies directly to our efforts this evening:

“When we encounter challenges and problems in our lives, it is often difficult for us to focus on our blessings. However, if we reach deep enough and look hard enough, we will be able to feel and recognize just how much we have been given.”

We’ve been able to catch all the female Hobo Kitties making sure they aren’t having more kittens. We’ve even captured two of the three male Hobo Kitties and had them fixed as well. We enjoy watching these amazing creatures; but consider it our civic duty to inhibit their endless propensity to breed.

That leaves Morris, Jaws’ twin brother; and he can wait. The female Hobo Kitties were the ones who needed to be removed from the gene pool right away and that has been accomplished. I’m not sure what happened in the Philly/Reds game during all the commotion. I think somebody hit a home run, big deal; we caught Jaws.