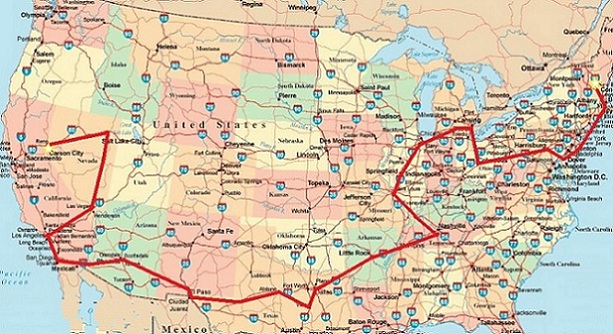 The national Tea Party organization Tuesday announced that it will go up with ads against the 15-term Democratic congressman from Massachusetts and will hold a rally in the state near the end of their upcoming cross-country bus tour.

“… group will focus on funneling resources to three U.S. Senate candidates: Joe Miller in Alaska, Sharron Angle in Nevada, and Christine O’Donnell in Delaware. “We’ll spend money in Alaska and have an advertising presence in Delaware. Sharron Angle remains our number-one race; she’s our favorite.”

While electing that trio is at the top of his agenda, Russo says that the Tea Party Express will also look to be a force in other hot races across the country. On October 18 in Reno, the group will launch “Tea Party Express IV,” a 15-day nationwide bus tour. The road trip will include rallies for Carly Fiorina in California, Pat Toomey in Pennsylvania, and Rand Paul in Kentucky.

Not every popular conservative insurgent could be included. Ken Buck, Colorado’s Republican Senate contender, is a tea-party favorite, but he was not included on the bus tour for logistical reasons. Marco Rubio, Florida’s GOP Senate nominee and one of Russo’s favorite candidates, was also left off the itinerary. “We really like Rubio and would like to be involved, but I don’t think he needs us,” Russo says. He points out that Rubio, who for months was mired in a tight three-way race, has galloped to a 25-point lead, according to Rasmussen’s latest poll.

Similar decisions have also been made with regard to finances. Linda McMahon, the self-funded Republican Senate nominee in Connecticut, will probably not see Tea Party Express dollars flow into Hartford, though the group’s bus will stop in Waterbury in early November. In New Hampshire, Kelly Ayotte, the GOP Senate nominee, will benefit from a rally in Concord, but little more.

Russo tells us that he supports Ayotte, who beat his favored candidate in the primary, but will probably not have the time or the bankroll foradvertising blitzes except in Alaska, Delaware, and Nevada. He says that his group, which is in high demand, must concentrate on where it can have the greatest impact, not simply on where it can lend a helping hand. “We can’t carry anything or elect anybody by ourselves,” he says. “Our goal is to make a difference.”

Chicago Professor: If The U.S. Gets To Spain’s Level Of Unemployment, We’ll Have A Revolution

The First 10 City Pensions That Will Run Out Of Money

The 9 Stages Of Global Monetary Breakdown

Your Household Owes $14,165 To Pay For Your City’s Employees Retirements

Nouriel Roubini: This Is What Obama Could Do To Prevent A Double-Dip

El-Erian: If We Keep Abusing The Dollar, The World Will Look Elsewhere For Its Reserve Currency

The change we need: 120,000 foreclosures per month

Dreamtime of the Baby Boomers

The American Housing Market Is Headed for Total Destruction

(Slideshow) The Free Market Argument for Not Buying Fast Food?

November 30th Could Be the Day the Government Seizes Control of the Internet (Hat Tip: Brian B.)

Foreclosure Mess Deepens, as Experts Fear that U.S. Has Yet to See the Bottom (Hat Tip: Brian B.)

American Children Are Strangers In A Strange Land (Hat Tip: Brian B.)

Survey: Inflation to Fall Short of Fed’s Goal Through 2012

Jobless America threatens to bring us all down with it (Hat Tip: Brian B.)

Obama Was For ‘Shovel Ready’ Before He Was Against It

Cities Face Half a Trillion Dollars of Pension Deficits

The 19 Countries Most Likely to Default: Ireland Surges Higher

Are Apocalyptic Events Closing In On Us?

Stocks End Flat At The Start Of Busy Earnings Week

This is hysterical – very, very funny… 🙂

From Tom Elia over at The New Editor: ‘Movies are Made to be Seen’

He also reveals how some of the Marxists participating in those conferences would influence Obama’s career in later years.

In this post I look at the 10th annual Socialist Scholars Conference held at the Borough of Manhattan Community College in April 1992. 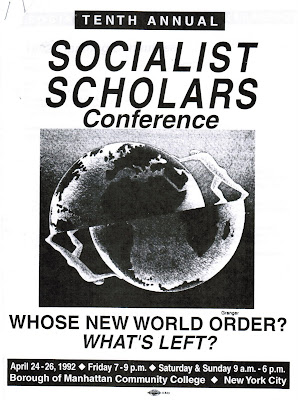 One panel in particular was important: “Towards a New Party,” with Elaine Bernard, Arthur Lipow, Kurt Stand and Judy Page.

The panel was openly sponsored by DSA and Elaine Bernard and Kurt Stand were both leading DSA comrades. Lipow is at the very least a supporter.

At this time, the New Party was in its infancy. The first strategic meetings to plan the New Party were held in the Madison Wisconsin home of radical academic Joel Rogers in the very early 1990s.

Present at the meeting were Rogers’ wife Sarah Siskind, (a lawyer who worked for the same firm as Barack Obama), Dan Cantor (now a leader of the DSA infiltrated New York Working Families Party), ACORN leaders Wade Rathke, Zach Polett, Steve Kest and Jon Kest, Steve Cobble from the far left Institute for Policy Studies, (there in an advisory role), Sandy Morales Pope (for the first 18 months) and at least at the first meeting Gerry Hudson from DSA and SEIU.

Of the conference panelists, Judy Page was obviously a New Party activist, while Elaine Bernard went on to become a key builder of the New Party.

The most interesting of the panelists however, was Kurt Stand.

Inspired by his family’s beliefs, Kurt Stand was politically active from his teens – defending Angela Davis, Philip Berrigan and Daniel Berrigan and joining the Young Workers Liberation League; the youth-wing of the Communist Party.

Kurt Stand was also a long standing spy for East Germany and possibly the Soviet Union.

The young Kurt Stand began his spying activities in 1972 after being recruited by East Germany to cultivate other spies in the Washington, DC area. He was introduced to East German intelligence officers (the Stasi) through his father Mille Stand, a chemical engineer who fled Nazi Germany in the 1930s.

An FBI affidavit said East Germany’s relationship with the Stand family goes back to Stand’s father (Mille Stand), who recruited his son as a communist agent.

Stand and his wife, co-conspirator Theresa Squillacote, frequently traveled to Mexico, Germany and Canada during which time Stand would meet with their East German handlers.

When the two Germanys united in 1990, Stand’s controllers attempted to recruit him to spy for the Soviet Union and then for the Russian Federation. Although he never gained access to classified material, his role in the operation was to recruit agents and to provide information about the non-governmental groups with which he worked. Stand allegedly received $24,650 for his recruiting and coordinating efforts.

On 23 Oct 1998, he and his wife Squillacote, were convicted of conspiracy to commit espionage, attempted espionage and illegally obtaining national defense documents. On 22 Jan 1999, a US District Judge sentenced Squillacote to 21 years and 10 months in prison and Stand to a sentence of 17 years and six months.

What role if any Kurt Stand played in the New Party is unknown, but the role of its most famous recruit, Barack Obama is becoming increasingly clear.

Barack Obama was a member of both organizations.

I recently have become interested in the New Party as well as committed myself to see if we can build a Progressive Chicago network, working with Madeline Talbott of ACORN – the local New Party convener.

I wanted to introduce you to the NP and Progressive Chicago and would like to talk to you about it to see if there is a role you want to play.

Barack Obama was probably approached to join Progressive Chicago as early July 7, 1993 and was among key members invited to a January 1994 meeting in this December 31, 1993 letter: 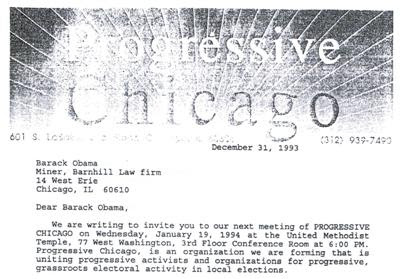 Numerous documentary sources have confirmed that Obama went on to also join the New Party. including this clipping from New Party News, Spring 1996, page 1: 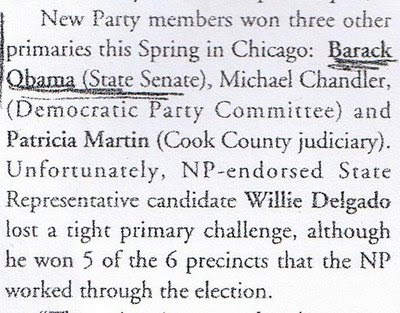 Barack Obama went on to win an Illinois State Senate seat, then a US Senate seat, followed by the Presidency of the United States of America.

Kurt Stand languishes in prison, a convicted traitor to his country. However, he still remains committed to “changing America.”

In June 2008, Kurt Stand wrote an essay in prison entitled “Supporting Barack Obama: A Prison-Eye View of the Presidential Campaign“:

As to Obama, I vacillated, knowing of his past activism, but not seeing enough in his Senate record or campaign approach to sufficiently differentiate himself from Edwards or Clinton…

To go back to Obama, nobody knows what he will do, but if he is able to overcome our country’s racism and actually win election we can expect some initial efforts to rein in the excesses of the Bush Administration, some measures to ameliorate the worst conditions which people are experiencing in terms of rights, in terms of insecurity…

It will be up to those who want genuine social justice to build movements that give him the possibility of pushing further; finding out then whether he will or won’t remembering that the key will not be him but us (us defined as those who worked for his election, for social justice activists, the left) and what we do, how we organize. How we use the social solidarity the campaign is developing as the basis of a renewed social solidarity. Will that be enough — no, the structural roots of the wars in Iraq/Afghanistan, of neo-liberal economics, of the authoritarian aspects of our political culture won’t go gently in the night. Only, however, by working in good faith with attempts to improve what is, is it even possible to imagine the building of the necessary, broad-based, independent, radical formations able to press for deeper changes.

In sum, radicals and progressives ought to join those — including those in prison — who have already decided to back Obama, see where the campaign can take us, see what can then be accomplished.

Interesting indeed that Kurt Stand should claim to know of Obama’s “past activism.”

Kurt Stand was a Washington DC based labor activist. Barack Obama was an obscure Chicago “community organizer” and local politician. How did he know of Obama’s past? What was the connection?

Two men once moved in the same circles. One is an now incarcerated traitor, the other is President of the United States of America.