Chris Coons raised property taxes 54%. He raised the sewer taxes 64%. He promised as a candidate NOT to raise taxes. Shame on Chris Coons. 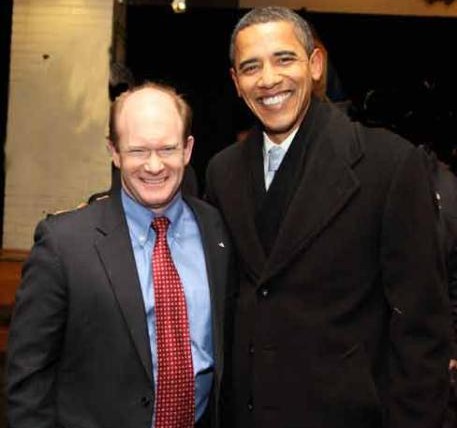 Show me your friends and I’ll show you your future.

Does it matter that Chris Coons is a Marxist? Does it matter that he is anti-American? His supporters are among the most extreme Socialist, Marxist and Communist organizations flying under the radar in America today. This article exposes some of them.

The evidence is clear and we all know that actions speak louder than words. As Executive of New Castle County, Chris Coons has only scratched the surface of the level of taxation he intends to impose. He’s grown the size of government locally and he’ll continue that pursuit through federal legislation if he is elected Senator.

His campaign rhetoric is meaningless; it is his actions and the organizations supporting him, that require examination.

Who supports Chris Coons and who is he beholden to?

As you can see from a partial list of his contributors below, he is beholden to anti-American organizations who want to end our free-market system, grow the size of government, reduce freedom and the standard of living for all Americans, transfer the wealth of America to other countries (NOT to other Americans who need a hand up) and ensure that America is transformed into a Marxist/Socialist/Communist nation that cedes its sovereignty to the United Nations.

TRUMAN NATIONAL SECURITY PROJECT: As of September 8, 2010, Coons served as a senior fellow of the Truman National Security Project. The project is an organization that seeks to recruit, train and elect progressives who will have an impact on National Security legislation. A number of those who work for the Project are involved with the Council on Foreign Relations or the George Soros group, Center for American Progress. Other figures of note working for the Project as Board Advisors are John Podesta, President and CEO, Center for American Progress; Board Member, Apollo Alliance; and Advisory Committee, ACORN.

ONE NATION WORKING TOGETHER RALLY: At least 12 of the 25 official groups supporting Chris Coons were formal co-sponsors of the One Nation Rally, joining forces with the Communist Party USA, Socialists, Marxists and other radicals in support of Barack Obama and attempting to counter the Constitutional force of Glenn Beck‘s 9/28 Rally. These organizations have been dubbed “The Coons 12.”

“The Coons 12” are closely affiliated with the International Socialist Organization, Color of Change – self-avowed Communist Van Jones and the Democratic Socialists of America. Sponsors of the rally are also aligned with ANSWER – Act Now to Stop War and End Racism, the radical supporters of Hezbollah and Hamas.

Citizens for Global Solutions is supporting Chris Coons in the 2010 Senate race in Delaware. Citizens for Global Solutions envisions a future in which nations work together to abolish war, protect our rights and freedoms and solve the problems facing humanity that no nation can solve alone. This vision requires effective democratic global institutions that will apply the rule of law while respecting the diversity and autonomy of national and local communities. They use terminology which sounds as though their mission is a noble one, but make no mistake, their goal is to cede U.S. sovereignty and place America under UN control.

SEIU: “Workers of the World, Unite!” [1] is SEIU’s motto and it’s one of the most famous rallying cries of communism. SEIU is organizing internationally and their leadership (not SEIU union workers) plans to enact what Karl Marx and Friedrich Engels gave to Europe, the USSR, Hitler’s National Socialist (NAZI) Party in Germany and every other failed Socialist, Fascist, Marxist and Communist regime.

Council for a Livable World: Founded in 1962 by long-time socialist activist and alleged Soviet agent, Leo Szilard, is a non-profit advocacy organization that seeks to “reduce the danger of nuclear weapons and increase national security,” primarily through supporting progressive, congressional candidates who support their policies… Slizard further called for the establishment of a “U.N. Peace Court” at a 1961 Pugwash meeting in Vermont, which would have the power to pass a death sentence on any U.S. citizen or official it deemed guilty of violating “peace” and urged it have power to deputize any and all Americans to execute its sentences. The Council claims to have over 40,000 supporters who contribute to the fund to get progressive candidates into office.

Considering that the socialist theories of Karl Marx, when implemented, led to regimes (e.g. Lenin, Stalin) that murdered approximately 135 Million innocent men, women and children during peace-time and resulted in totalitarian control and enslavement of the people who survived, I doubt that Americans who enjoy the freedom we have can imagine this ever happening in our country. However, if we continue to vote for Marxists, it won’t be long before we are ‘transformed’ into an unrecognizable nation.

A vote for Chris Coons is a vote AGAINST freedom and the free market system that has made America the greatest and most giving nation on earth.

[1] The political slogan Workers of the world, unite!, is one of the most famous rallying cries of communism, found in The Communist Manifesto (1848), by Karl Marx and Friedrich Engels. A variant form, Proletarians of all lands, unite! is inscribed to Marx’s tombstone in German: Proletarier aller Länder, vereinigt euch!

This slogan was the USSR State motto (Пролетарии всех стран, соединяйтесь!), appeared in the coat of arms of the Soviet Union, and on 1919 Russian SFSR banknotes (in German, French, Chinese, English, and Arabic). Contemporarily, some socialist and communist parties continue using it. Moreover, it is a common usage in popular culture, often chanted during labor strikes and protests.