My folks have a painting in their living room, a pastoral hunting scene by Currier and Ives. It serves as a historical reminder of days gone by, rural landscapes with horses and dogs chasing through the brush, their riders dressed fashionably for the ride.

Glancing through the internet, I found a similar painting by Currier and Ives called, Fox Hunt. It was a simple rendering on canvas; dogs and horsemen awaiting the hunt, a reminder of how things used to be prior to suburbia and shopping malls. Viewing the painting, a few assumptions could be made; the most obvious, those involved were members of the aristocracy, or at the very least men of means to be arrayed in such finery.

The picture of groomed horses trained to jump obstacles and obey a riders command during the hunt portrayed a certain elevated station in life. A pack of hunting dogs indicated a rather large investment; care and grooming as well as years of breeding for the sole purpose of hunting at the whims of an owner who enjoyed the hunt, is difficult for the average working man to comprehend. While we can appreciate the singular beauty of such a scene; not many of us can afford such a luxury; maybe it’s the age old story of class envy, a yearning for something out of reach.

I saw a photograph posted on the internet of a fox hunt; the early morning fog blended the dreamlike vision in such a way as to remind me of those Currier and Ives paintings. I saved the picture to file thinking someday I’d share it; today must have been that day. 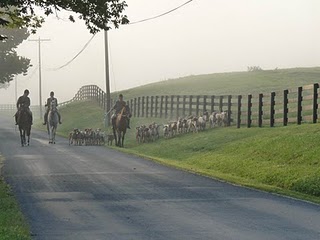 That brings me to an ongoing court case in which the Philadelphia SPCA staged a series of blunders which needs to be sorted out. I’ve been following a set of articles posted by JDZ at a website called Never Yet Melted over the past year or so and have mixed feelings as to what is right and wrong with the whole mess created by PSPCA; but I’ll get to that later. Here’s the lead-in as posted most recently:

“After more than 14 months, all 22 counts of animal cruelty charged against Murder Hollow Bassets master Wendy Willard in August of 2009 by the Pennsylvania Society for Prevention of Cruelty to Animals (PSPCA) in Philadelphia County were withdrawn on October 5, 2010 in Philadelphia Municipal Court. Wendy was also found to be in complete compliance with all applicable statutes.

You may recall that on July 27, 2009, the life of Wendy Willard, a retired social studies teacher and nationally recognized Master of a pack of hounds known as Murder Hollow Bassets, changed forever. That day, using a warrant obtained following a trespass on her property, the PSPCA searched Wendy’s barn, seized 11 of 23 hounds and pressured her to sign so-called “surrender agreements” by threatening to take the other 12 dogs and subjecting her to a heavy fine if she refused.

The search and seizure was performed under the guise of enforcing the Philadelphia “limit law,” applicable only to residential dwelling units, and not a barn inhabited by dogs. However, before Wendy was charged with anything, and without notification to her, all of the hounds were spayed and neutered after their seizure. Worse still, one of the hounds was killed as a result of a botched attempt at surgery during the mass spay/neuter operations performed by the PSPCA. The 10 remaining live hounds became infected with a lung virus in the PSPCA’s facility. The PSPCA then sent those 10, with medications, to an unlicensed “rescue” operation that sold them all for “adoption” before any hearing on the charges took place.

Somewhere in all those words, the idea of tyranny came to mind, a nagging thing called due process might have been ignored; but more importantly there’s the issue of property rights. At what point did PSPCA determine they had gained the right to another’s property? Enough that they were permitted to do as they pleased without the consent of either the courts or the rightful owner?

“The moment the idea is admitted into society that property is not as sacred as the laws of God, and that there is not a force of law and public justice to protect it, anarchy and tyranny commence. If ‘Thou shalt not covet’ and ‘Thou shalt not steal’ were not commandments of Heaven, they must be made inviolable precepts in every society before it can be civilized or made free.”

— John Adams (A Defense of the American Constitutions, 1787)

There is something terribly wrong in America. Private property is no longer considered sacred. Maybe the folks at PSPCA don’t like the idea of folks using dogs to hunt; could it be that simple?

I read an account, humorous to a point; but true to a fault, on how to tell the difference between conservatives and liberals. One of the examples used, had to do with firearms, “If a conservative doesn’t like guns, they don’t buy them. If a liberal doesn’t like guns, then no one else should have one either.” I suppose the same could be considered with hunting dogs. The idea of running them through the brush, thorns and ticks, mud and injuries; not to mention the terrified fox being chased down simply for sport.

The problem with applying this type of selective rational, is it violates every concept of private property. It suggests that society has the power, not the right, but the power, to dictate the presumed proper use of property based on collective judgment rather than individual determination.

Ezra Taft Benson reminded us of a talk he gave, The Proper Role of Government, of something recorded in the Alabama Declaration of Rights:

“That the sole object and only legitimate end of government is to protect the citizen in the enjoyment of life, liberty and property, and when the government assumes other functions it is usurpation and oppression.”

“This means, then, that the proper function of government is limited only to those spheres of activity within which the individual citizen has the right to act. By deriving its just powers from the governed, government becomes primarily a mechanism for defense against bodily harm, theft and involuntary servitude. It cannot claim the power to redistribute the wealth or force reluctant citizens to perform acts of charity against their will. Government is created by man. No man possesses such power to delegate. The creature cannot exceed the creator.”

Again I ask, at what point did PSPCA determine they had gained the right to another’s property? Enough that they were permitted to do as they pleased without the consent of either the courts or the rightful owner? Regardless of how you feel about the use of hunting dogs, petrified little foxes being used for sport or the need for animals to be spayed and neutered; there must be a universal respect for the right to property. An inviolate precept which government and its agencies must adhere to or civilized society as we know it will not be found here in America.

If we, collectively or individually, ignore the importance of an individual’s right to property, we ignore his right to life as well. Have we abandoned the efforts of so many valiant individuals, efforts to safeguard God given right to life, liberty and the pursuit of happiness through constitutional protections from our government? How I yearn for days gone by…