Have you ever heard someone explain how you don’t need to re-invent the wheel? There’s a story by Ilan Brat courtesy of the Wall Street Journal, The Great Banana Challenge, which explains some of the difficulties faced when attempting to move from junk food vending machines toward more nutritious snacks.

“But dispensing fresh produce comes with a particular set of challenges. Fruits and vegetables spoil a lot more quickly than a bag of pretzels. They cost more to stock and carry a higher price tag. Getting the temperature right is tricky, too: Bananas need to be stored at a higher temperature than cantaloupe to stay fresh. And then there’s the bruising issue: A banana can easily get squished from the 4-foot fall from a machine’s top shelf.”

Glancing at the line, “Fruits and vegetables spoil a lot more quickly than a bag of pretzels,” brought a smile since that particular statement really isn’t true. My grandfather, Daniel Vincent Wadsworth (we called my grandfather by marriage Waddy), was a sugar chemist and in his retirement years he dedicated much of his time to developing a means whereby the chemical decomposition of fruits and vegetables was slowed or even halted; enough that it was difficult to tell the difference between a piece of fruit picked yesterday from one picked six weeks earlier, so much for the term “fresh fruit.”

He figured out the chemical makeup of an inexpensive coating which stopped fruit from spoiling for a significant time period. I was fairly young and perhaps he was pulling my leg when he handed me an orange which he claimed was several months old, an orange which appeared and tasted in every way “fresh.” Instinct tells me he was telling the truth, something about the way he explained it validated his words.

I’m told Waddy was paid a handsome amount by one of the large food companies to make the formula “disappear.” Maybe the secret is sitting on a shelf collecting dust at General Foods or one of the other huge corporate giants. In either case, refrigeration may not be the answer to making fruits and vegetables available for vending machines; the chemical process which causes them to deteriorate can be inhibited at room temperature.

There you have it, one of the mysteries of the universe; why would a civilized society intentionally hide a secret which makes fruits and vegetables less susceptible to spoilage? How much food is thrown away each day because it no longer appears desirable? What’s it worth to the world to make our food supply last a bit longer? I only ask because with the threat of Climate Change, either colder or hotter, wouldn’t it be wise to save for the day when crops produce less or fail due to shorter growing seasons? 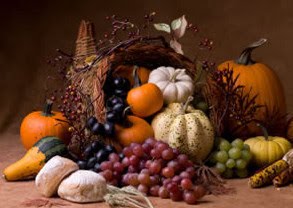 This picture originally appeared on Meridian Magazine’s website during one of their fund raising drives. With Thanksgiving just around the corner, wouldn’t it be wonderful if we took stock of our blessings, an abundance of food being one of them? There’s an old saying, “Waste not want not.” Showing our gratitude by making better use of what has been provided seems appropriate.

We were driving around our home area and were up visiting Hauser Lake again – love it there… Thinking of moving there. Hubby and I were surprised to find a Momma moose and her baby in a yard we drove by – close enough to touch no less. Moose pictures ensued… 🙂 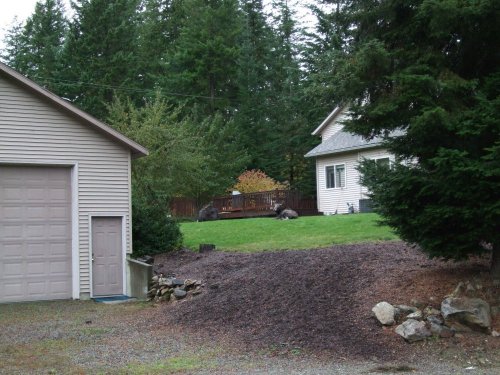 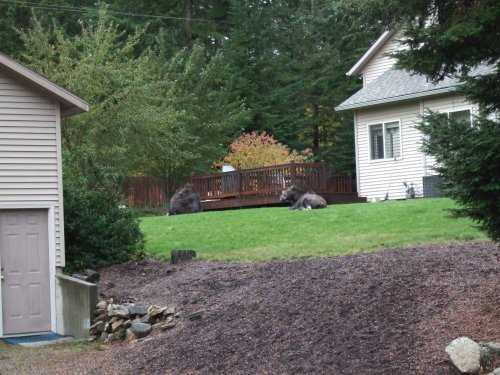 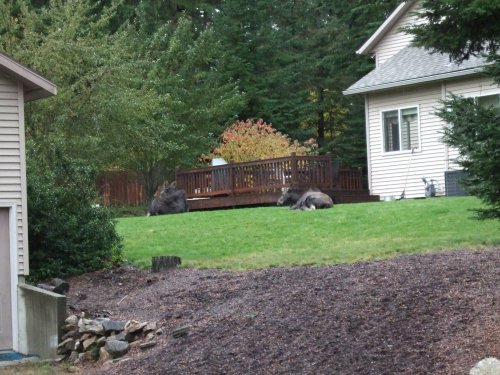 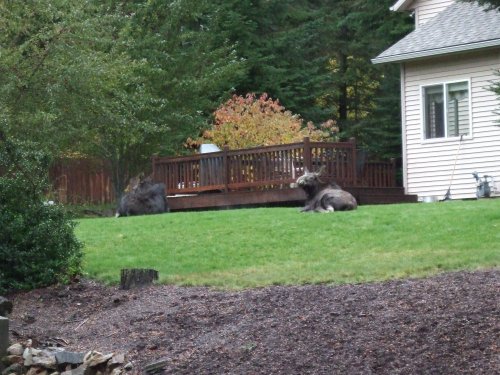 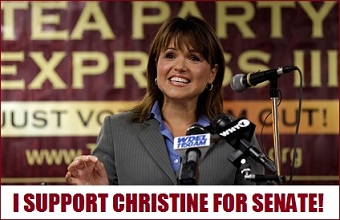 New Poll Has Christine O’Donnell Within 6%

Stunning news to report today, fellow patriots. A brand new poll has Christine O’Donnell surging to within 6% of her Democrat challenger, Chris Coons.

This late-in-the-campaign surge replicates her surge in the polls in the GOP primary, when everyone had written her off and said she could never win.

She proved the so-called “experts” wrong before and she seems poised to do so again!

With just 10 days left until Election Day, we would love nothing more than to defeat Barack Obama’s and Harry Reid’s candidate, Chris Coons, and give the media heartburn by electing Christine O’Donnell to the U.S. Senate.

But now we’ve got to give it everything we’ve got because it seems the national Republican Party has abandoned her and is refusing to put money into her campaign. But we here at the Tea Party Express aren’t abandoning Christine O’Donnell, and we’re committed to helping her win, just as we did in the primary.

Our goal is to raise $150,000 for Christine’s campaign in the next 72 hours. Please, let’s not just reach that goal, let us surpass it!

Please make a donation to our campaign for Christine O’Donnell – HERE.

We’re hoping that at least 600 conservatives and tea party activists will contribute $100 or more in the next 72 hours. Please forward this email to everyone you can! 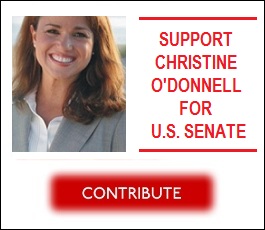 As always, if you prefer you can mail in a contribution via U.S. mail to our headquarters:

This is the press conference for the release of the Center for Security Policy’s report, “Shariah, the Threat to America.” It was composed by Team B II, a group of intelligence and national security professionals, including former CIA head James Woolsey, author and former federal prosecutor Andy McCarthy, Lt. Gen. Jerry Boykin, author Diana West, the Center’s Frank Gaffney, Lt. Gen. Ed Soyster, and many others. At the press conference at the US Capitol, the report was presented to Rep. Trent Franks (R-AZ) — who read a statement on Team B II by Rep. Michele Bachmann (R-MN) — and Rep. Pete Hoekstra (R-MI).

To read the report, go to http://www.shariahthethreat.org.

Shariah: The Threat to America

By: Ron the Cop

OK folks. Is the S-R’s endorsement a surprise to anyone even though the owners are somewhat conservative? Yes, Murray has brought the bacon home, but just who was benefiting?

The S-R is wielded by its owners to support those that have benefited them. See this excerpt from an email I just sent to the Board of Accountancy investigator that handled my complaint involving Gavin Cooley’s misuse of the title CPA:

“… I would have needed a prosecutor willing to stick their neck out a little same as you would too. With what I know of Steve Tucker, Spokane Co. Prosecutor and AG Rob McKenna (Asst. AG Marlow’s apparently now on ice*) this was not likely. The Cowleses will act to protect those who have done them favors, Tucker, Murray, Ormsby, Siddoway (Now a WA appellate court judge), Steve Rector, their secretary/treasurer, and Cooley and others. The S-R has just endorsed Sen Murray in her bid for reelection. Murray is dirty in the RPS Bond Frauds as well as reported by Larry Shook:

Sen. Murray and the S-R were also backers of Michael Ormsby for the US Attorney for the Eastern District of WA. Ormsby should have been indicted for his role in the first RPS Bond Frauds. Talk about leaving the fox to guard the hen house. See my report:

MEDIA ALERT – The Crime that Leads to the White House (Spokane, WA)

See the embedded link within to my report:

[*] “* Read Evidence Item RW26 and esp. the addendum in my attached Table of Evidence [ http://tinyurl.com/ybgkjqe ] re the explosive comments from WA Asst. AG Scott Marlow to David Savage. AG McKenna has tried to blow this off and Marlow is now on ice from the media. Spokane Co. Commissioner Bonnie Mager in a subsequent phone call corroborated what Marlow told Savage. David Savage did not misinterpret what Marlow told him – the AG was providing political cover not to file the Savage manslaughter case. A quid pro quo to secure the favor of the Cowleses in the 2012 governors race?

I will be doing a post later on the S-R article where the Board dismissed the CPA compliant but is still investigating:

“Sweeney called the usage “incidental.” He said a separate case remains, based on Wright’s complaint related to Cooley’s involvement with the city’s 2004 settlement with River Park Square. The mall is a subsidiary of the Cowles Co., which also owns The Spokesman-Review.”

The Real Underemployment Figure Is 22.5% (Hat Tip: Brian B.)

Germany Accuses US of ‘Manipulating Dollar’

You Don’t Bring a Praseodymium Knife to a Gunfight

Fed’s Fisher: Policy Makers Must Be Aware of Dollar Impact

Wiedemer: Inflation on the Way Despite Deflation Fears

Carlos in the U.P. wrote: “I noted with interest that the Wal-Mart I shop at had cleared the shelves of “Great Value” brand coffee in 39 oz cans for about 2 weeks. Today the new can appeared, with the following differences: 1.) Can is now 33.9 oz, down from 39 oz. Also conspicuously missing is the conversion of 2lb, 7oz therefore no comparison in pounds is easily made. 2.) Price for this smaller can is up from $9.88 to $10.48, by my rustic math an approximate 20% increase! 3.) Contents of can are no longer ‘Premium Columbian’ Decaffeinated. Now labeled ‘100% Classic Decaf'”

Marc Faber and Mish Shedlock continue their polite sparring on the threat of inflation.

Gold Will Explode Higher as the U.S. Dollar Bubble Bursts

Fannie, Freddie May Need Another $215B in Aid

The US Dollar is Doomed

The US Must Prepare for Savage Austerity