Democrat Candidate To Obama: “He Can Take His Endorsement & Really Shove It”

Will the Federal Reserve Cause a Civil War?

On the campaign trail last month, Obama lambasted Republicans, saying, “Republicans have not come up with one new idea.” Putting aside the fact that Obama is ‘factually incorrect,’ (see Rep. Paul Ryan’s ‘A Roadmap for America’s Future‘) his statement embodies the fatal flaw of Progressivism.

Winston Churchill said, “The farther backward you can look, the farther forward you are likely to see.” Obama disagrees.

Each and every “new” policy of Obama’s administration in the last 20 months has one thing in common. Their foundations are lodged in wishful thinking, hope, if you will, that Obama’s perception of reality will magically translate into the underlying reality. They are all “new” solutions to old problems.

New solutions to old problems are an essential element of America’s spirit of entrepreneurship and one of the reasons America leads the world in innovation. Unfortunately, Obama’s view of Progressivism completely excludes the lessons of history.

It comes as no surprise to students of history that Obama’s solutions are not working. From bailouts to the cutely named “stimulus” programs, from ObamaCare to the government take-over of many segments of the formerly private economy, every solution Obama has proposed or implemented has been tried in the past. And they have all failed in the past. Just as they are failing now.

Whether due to ideology, ignorance, hubris or naivety, Obama appears to believe he can define his own reality. He is like a young child who, by closing his eyes convinces himself that no one can see him. Obama is the result of a liberal education un-tempered by real-life experience or economic necessity. Or the lessons of history.

Our founders designed the system of federalism, wisely leaving to the states the ability to experiment with new solutions. The states are America’s laboratories, implementing new solutions on a small scale, minimizing the risk of failure and those darn unintended consequences. Until now.

Never having been held responsible for the outcome of his actions, Obama sails merrily forth advocating his, not so new, ideas, secure in the knowledge that the American taxpayers will be paying the very real cost of his mistakes. As we are now doing on a daily basis.

Obama’s reliance on the ideological tactics employed by many of his known mentors and friends, has resulted in a measurable decline in America, economically, politically and militarily.

His inability to allow for the possibility that history, tradition or conservative principles may offer a possible solution to the current economic mess America remains mired in, guarantees that America’s problems will not be solved as long as Obama holds office.

As Obama struggles to redefine reality to his specifications, history marches on, with dire consequences for the future of America. As history shows:

The average age of the world’s greatest civilization from the beginning of history, has been about 200 years. During those 200 years, those nations always progressed through the following sequence:

1. From bondage to spiritual faith.

2. From spiritual faith to great courage.

3. From courage to liberty.

4. From liberty to abundance.

5. From abundance to complacency.

6. From complacency to apathy.

7. From apathy to dependence.

8. From dependence back into bondage.

Obama is either unaware of the course of history, or he is counting on it.

Individualism as a psychiatric illness — what the NPR kerfuffle reveals
. . .

For those too young to remember those times, you have to appreciate that psychiatry in America and psychiatry in the Soviet Union were two vastly different things. In the Soviet Union, psychiatry wasn’t about voluntary commercial relationships between an individual and a doctor, with the latter helping a person break a bad habit, find greater happiness, control anxiety, make personal relationships richer, or whatever else got a person thinking a psychiatrist might be a good thing.

The article displays her usual incisive insight. She makes the point well: the pro-monolithic state fans view non-conformity as deviance and a “disturbed” condition, which clearly needs “treatment” at the hands of “professionals.”

Psychiatry in America enjoys substantial state funding, and is firmly entrenched in the public education system’s dogma and practice, gaining ground steadily over the last five decades. It is an interesting correlation that our national educational product has declined in quality pretty much in proportion to the increases in psychiatric influence over teacher training and administrative policy.

They’ve been patient, much as the “Progressives” have been. The “voluntary commercial relationships” to which she refers are only still voluntary because they don’t have enough of a state foothold to make them compulsory. Don’t imagine that they won’t seize the opportunity once it’s offered. And, if you need to be entertained, in a Freddy Kruger sort of way, a quick read through the DSM IV (the Psych professional’s bible) will elicit nearly hysterical giggles at some of the entries, only to evoke chills and dread once you understand that any old Joe can be irrevocably labeled by the “professional” application of “professional” opinion, based on the contents of this manual whose contents are enshrined by a voting process, rather than by science.

One of the most glaring single things in the Psych profession’s body of “knowledge” — a thing which, all by itself, renders the whole profession unfit — is its classification of religion and religious belief as a kind of delusion, where the degree of delusion is a function of the degree of real belief.

It is through their tender ministrations that Medicine has adopted the general stance that God — and spiritual matters broadly — have no place in medical practice.

Now, if one is happy with the “no such thing as God” point of view, and wishes to seek solutions through the Psych “sciences,” far be it from me to say him nay; but for myself, and for those about whom I care at all, I will not place my mental health and well being in the hands of anyone whose medical opinion is that my religious views make me basically crazy, even if the “delusion” is mostly harmless.

I mean, seriously, why would anyone willingly do that?

So, while her essential point is more than a little valid, and is worthy of all the exposure it can get, let us not presume that, just because MK ULTRA isn’t (supposedly) being operated openly today, that Psychiatry is anything like our friend. They await only the moment when government has the degree of control it needs to engage their services to control the population’s thought crimes.

Anything that exposes this and helps to undercut their droning, hypnotic mouthpiece is a worthy effort.

Amy Kremer, who serves as Chairman of the Tea Party Express, today announced her endorsement of Congressman Tom Tancredo for Governor of Colorado.

“Tom Tancredo has always been there for the constitutional conservative principles that drive the tea party movement, and I am honored to support him,” Kremer said.

“It is time for Republican Dan Maes to end his campaign, endorse Mr. Tancredo, and do what is right and best for the people of Colorado,” Kremer said.

Kremer made her endorsement of Tancredo as the Tea Party Express IV: Liberty At The Ballot Box national tour steamed across the country!

Kremer’s endorsement of Tancredo is a personal endorsement, as the Tea Party Express, a federal PAC, does not make endorsement in state or local races.

Tancredo spoke at the Denver, Colorado rally of Tea Party Express III as pictured below: 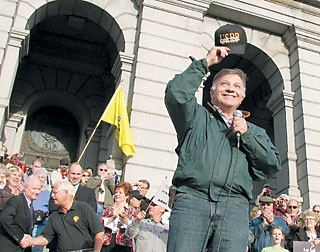