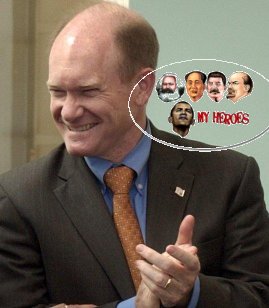 Stunning actions by Chris Coons and his operatives represent the limitless power and control he will wield over ordinary citizens if he’s elected Senator of Delaware. It’s time we take a serious and sobering look at this man to learn what he’s done, whose interests he supports and determine whether or not he will act in the best interest of the people of Delaware.

1. Did Chris Coons and his political operatives make a false and vicious personal attack on Christine O’Donnell (R-DE) by turning a date in her past into an untruthful sex scandal?

YES. On Thursday, 10/28/10, Chris Coons and his operatives created a slanderous personal story about a date from years gone by. Thankfully Chris Coons and his radical left operatives were vilified in the media for their despicable actions. Christine O’Donnell has not waged personal attacks at Coons; she campaigns on the issues and her specific plans to help Delawareans.

2. Was Chris Coons sued three times in 2007 for retaliating against Delaware public employees for their political views?

YES. The article can be found here. Perhaps the most egregious of the three…

“And two years ago, Freebery’s brother alleged in lawsuit that he was improperly fired because he supported his sister. He was the general manager of Special Services for the county.”

3. Was Chris Coons sued for violating the rights of a Delaware citizen?

YES. He violated Free Speech and Right to Privacy laws. He believed his position as County Executive gave him the power to release the private medical history of a Delaware citizen and chill his right to Free Speech.

As a Senator, if elected, do you think he’ll perceive that he has more power or less power? Have you ever been sued by four employees for violating their rights?

YES. The News Journal reported that “Coons voted to open a pension loophole that would have allowed County employees to buy into the pension system, or to transfer credit from other government services. He [Coons] saw to it that his buddies and top staff people — and all six of the new County Council Members and their staff — were grandfathered under that loophole which has, and will, cost [Delaware] taxpayers millions of dollars.”

NO. Let’s listen to his own words stating that he would rubberstamp the Obama agenda… regardless of whether or not it’s in the best interest of Delawareans.

“I’m someone who would broadly support the agenda of our president. We disagree on a few things, like drilling. But in general, I think that we need more folks in the Senate of the United States who are willing to vote. Willing to vote, for example, to confirm a Supreme Court nominee, someone who respects precedent, who follows the values that Justice John Paul Stevens brought to his deliberations on important issues of the day. Somebody who is willing to work in responsible partnership with an administration that I think made the right choice on health care, on the stimulus, on the jobs bill.”

Chris Coons: I Will Support Harry Reid And Rubberstamp The Obama Agenda

YES. Chris Coons stands to make millions off of middle and low-income Delawareans through his wealthy family business if Cap and Trade passes in the Senate.

7. As County Executive, was Chris Coons fiscally responsible? Did he fulfill his campaign promise not to raise taxes?

NO. The following videos tell the tale.

“Meet Chris Coons, the Taxman. As New Castle County Executive, Coons couldn’t find enough taxes to raise. In fact, he even petitioned the state legislature for new authority to levy even more taxes on items he couldn’t tax before. Learn more about Chris Coons‘ tax schemes at www.coonsthetaxman.com“

8. Has Chris Coons been honest about his trip to Africa and what his political ideology was transformed into?

NO. The American Spectator does an exceptional job in their article “Chris Coons: Volunteer for Liberation Theology.” Here’s an excerpt:

“Now, the liberation theology chickens that Chris Coons was supporting in Africa have come home to roost in America .

Car companies have been nationalized, the government has made a move to control banks, financial institutions and — at the top of the unpopularity chart — America ‘s health care system. Taxes are headed up, unemployment perpetually hovers close to double-digits, eye-popping deficits into the trillions loom for generations and just last week the U.S. Census Bureau announced that the poverty rate had soared to 14.3% {in 2009, which adds 3.34 million more Americans living below the poverty line}, up from 13.2% in 2008. As the Wall Street Journal points out, this “translates into 43.6 million Americans living below the poverty line, the largest absolute number in the half-century for which comparable data are available.” Last week the Obama White House announced it was putting Elizabeth Warren, the Harvard Law School professor New Hampshire whom Senator Judd Gregg calls a “social justice” advocate, in a position to, again in the Journal’s words, “dictate how credit is allocated throughout the American economy.” Class warfare reigns.

In other words, America is right this minute in the tightening grip of “liberation theology” — exactly the philosophy that Delaware ‘s Chris Coons was so anxious to go to Africa and serve as a volunteer. The idea, as the South African Black Consciousness Movement had it, of “state participation in industry and commerce…and an even larger role for the state in planning and control.”

Only to the Ruling Class is it any surprise Americans are furious. Americans — most recently all those Delaware Republicans surging into the voting booths to back Christine O’Donnell — now vividly understand with all too much precision the connection Hannity was explaining. They now understand the direct connection between the far-left ideas behind candidate Obama, James Cone, Jeremiah Wright, liberation theology — and their own everyday lives as Americans.”

Chris Coons’ abuse of power as a County Executive is stunning. His actions and record show that he’s actually the worst candidate that Delawareans could ever elect to represent them.

Chris Coons is a man who used his position to retaliate against employees/citizens of Delaware, to release a citizen’s private medical information, to use vicious lies in an attempt to personally slander an opponent, to lie to Delawareans to get elected and then raise their taxes once elected, to misrepresent his political ideology and what he did in Africa, and to manipulate the system to cheat taxpayers out of millions of dollars to benefit his special interest supporters.

Imagine what Chris Coons will do with his perceived power if he’s elected Senator? The thought is frightening.

And let’s not forget Chris Coons has made it clear that he’ll be a rubberstamp as a Senator. He’ll vote for Cap and Trade, more Stimulus bills and every other bill that his party wants – regardless of whether or not it’s good for the people of Delaware.