DAY 12 of TPX IV was all Michigan — Jackson, Waterford and Monroe. Pictured below is one of the Michigan rally scenes. The patriots in Michigan mean business and if you don’t believe me, ask Bart Stupak from the TPX III days! Andrea Shea King has more from yesterday’s rallies at The Radio Patriot.

DAY 13 has the crew on a two-state swing, with rallies in Columbus, OH — 10 AM; and Wheeling, WV — 3:30 PM. Tea Party HD and Liberty.com are just one click away from bringing you to the rally via your computer. Give it a try — no sign-up — just click! 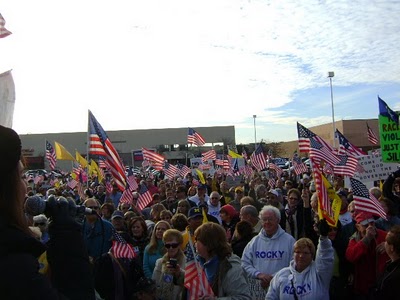 With just a few days remaining for TPX IV, I’d again like to mention those folks who are making sure the word gets spread far and wide: Terresa Monroe-Hamilton at NoisyRoom; John Ruberry at Marathon Pundit; Melanie Morgan at Melanie Morgan.com; Barbara at American Freedom; and one Grant at Tea Party Movement. The TPX IV efforts were much more effective with the help of these bloggers — more money was raised, more people watched and attended the rallies and more people became aware of the vast Tea Party movement sweeping our nation. And one more blogger I need to mention: Douglas V. Gibbs at Political Pistachio. Thanks, Doug!

CONTRIBUTE to the TEA PARTY EXPRESS — the tour ends on Monday and the election ends on Tuesday, but that just means we’re having a change in personnel in Washington DC. The work of TPX doesn’t end Tuesday. In fact, the real work will just begin. Our national problems aren’t going to be solved with this one election. We have to keep a close eye on those new members headed for DC, plus we have to round-up another new batch of patriots for the next cycle. We’re in a deep hole and it will take some time, money and lots of other support from YOU to get this nation back on track. So far, so good.

*UPDATES from tour embed Andrea Shea King will fall in below as our gal on the road calls them in. Check back often. Below, Kevin Jackson with Andrea Shea King in St. Louis. (Photo by Jim Hoft at Gateway Pundit.) 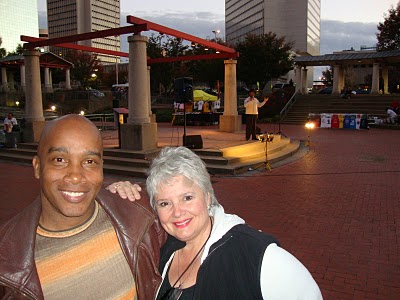