“CELESTIAL CITY”, all Sisters, perform at the BAY AREA PATRIOTS “Tax Day Tea Party” event in liberal San Francisco, California. We had a Great turnout of about 800 people on April 15, 2010. And these five sisters will touch your heart!

Minnick going down, yes your disgusting deceitful ads are not working and are going to bring you down to the bottom. Walt you will be comfortable at the bottom.

DAY 13 began normal enough, but when Sarah Palin arrives to a rally unannounced, it becomes something other than normal — it’s an event. And that’s what happened in Wheeling, WV — Palin took the stage, surprising all in attendance. An event? You betcha! Terresa Monroe-Hamilton at NoisyRoom had the story posted for her readers nearly an hour before Palin arrived. Below is video of Palin’s surprise appearance in Wheeling. Below that, Palin with our Gold Star Mom Debbie Lee. 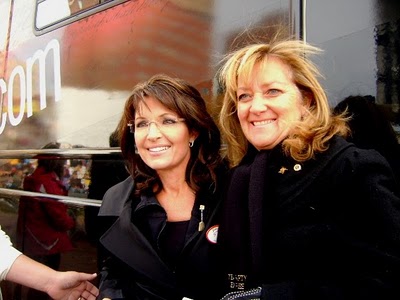 DAY 14 takes us on a three-state swing, beginning with a rally in Harrisburg, PA — 10 AM; Wilmington, DE — 3 PM; Toms River, NJ — 8 PM. You too can attend a rally by going to Tea Party HD — Liberty.com — click once and there you are. It’s going to be a long day. The remaining TPX tour schedule can be found here.

Two TPX rally days remain and our friends are still at our side posting about upcoming TPX tour stops. Without this kind of support and dedication, TPX IV couldn’t be the success it is — trust me on this.

Long-time veteran of cross-country tours, Melanie Morgan, can testify to that fact, and Mel’s always there for us. As is John Ruberry at Marathon Pundit; Terresa Monroe-Hamilton at NoisyRoom; Barbara at American Freedom. BlogTalkRadio veteran Douglas V. Gibbs at Political Pistachio is pitching in as well. Grant at Tea Party Movement — thanks for the assist!

NOW HEAR THIS: Support THE TEA PARTY EXPRESS!! Terresa Monroe-Hamilton explains why you MUST contribute… and NOW!

*UPDATES will fall in below as Andrea reports in from the road. The long, long day is about to begin…

(ON THE ROAD FROM WHEELING, WV) – Just days before the historic midterm elections, the cross-country tour Tea Party Express IV: Liberty at the Ballot Box (www.TeaPartyExpress.org) continues rallying across the US. The tour, whose recent event in Wheeling featured a surprise visit by Gov. Sarah Palin and U.S. Senate Candidate, John Rease, will hold tea party rallies Saturday in Harrisburg, PA; Wilmington, DE; and Toms River, NJ. Tea Party Express IV holds rallies that encourage conservatives to stand up for their ideals at the polls on November 2nd, and vote out liberal politicians who refuse to stop the runaway government spending.

The rallies, themed “Liberty at the Ballot Box,” seek to educate, entertain and encourage patriotic Americans who are concerned about the quasi-socialistic policies being pushed by the Obama/Pelosi/Reid axis. Incredible momentum has grown for the tour, as word of mouth, grassroots organization and media coverage has been helping turn out large energetic crowds who support the conservative message.

The Tea Party Express is considered the most aggressive and effective national tea party organization, and is best known for spending millions of dollars to help elect conservatives to office, as well as national bus tours holding rallies that feature conservative speakers, singers and candidates for office. Tea Party Express 4 spans 15 days, 34 cities and more than 6,000 miles. The tour comes just days before the 2010 elections, when numerous candidates endorsed by the Tea Party Express are expected to defeat their liberal opponents. Other members of congress have been targeted for defeat as a result of their support of higher deficits, growth in the size and intrusiveness of government, higher taxes, bailouts and more.

Here are the details on upcoming events:

Breaking News: Michael Johns and Tammy Bruce will be appearing with the Tea Party Express in Delaware today.

Michael Johns is a health care executive, former White House and U.S. federal government official, and a conservative policy analyst and writer. He is one of several national founders and leaders of the U.S. Tea Party movement. I have known Michael for years and he is not only a dear friend but one of the bravest and most dedicated patriots I have ever known.

Tammy Bruce is a radio talk show host, New York Times bestselling author, blogger, Fox News Political Contributor and contributor at The Guardian newspaper. Informing her commentary is the fact that she is also a gay, pro-choice, gun owning, pro-death penalty, Tea Party Independent Conservative. I have listened to Tammy’s show for years and admired her as a political leader and a staunch patriot who is not afraid to let her voice and opinion be heard far and wide.

This is an appearance that will absolutely rock. Spread the word… And Chris Coons – be afraid, very afraid…

Yesterday we told you how disgraced RINO Lisa Murkowski is working her “friends” network in the political establishment to try to steal the General Election campaign away from conservative Republican Joe Miller.

Today the news accounts are much worse. First, Murkowski’s lawyers forced radio talk show host Dan Fagan off the airwaves because he was advocating for Joe Miller. Murkowski’s legal team, backed by millions of dollars in special interest and labor union money, threatened the radio station they would be sued out of existence if they didn’t boot Fagan until after the primary – so as to silence his pro-Miller segments on his radio show.

But that’s just the tip of the iceberg. Reporters at the Anchorage CBS TV affiliate were caught red-handed conspiring about how to ambush Joe Miller and come up with an unflattering story, concocting smears against Miller and then saying someone at the Joe Miller rally would surely have to fit the mold. They even suggested the smear of alleging the Miller supporters were child molesters.

Andrew Breitbart has the report up – with the audio of the reporters caught on tape, here: http://biggovernment.com/publius/2010/10/30/anchorage-cbs-affiliate-caught-on-voicemail-conspiring-against-alaskas-gop-senate-candidate/

You will recall during the primary we warned everyone that the political establishment in Alaska was actually quite like the mob. The politics are corrupt, dirty and outsiders like Joe Miller who challenge the system, just as Sarah Palin did, are smeared, destroyed and attacked.

That’s what made our victory for Joe Miller in the primary so shocking and so historic.

Now we must ensure we can defeat the political establishment again. Please, we need your help in these final 3 days of the campaign – we MUST fight back.

We urgently need your financial assistance as we place radio and TV ads in support of Joe Miller and in opposition to RINO Lisa Murkowski.

Please, help us fight back. If you can give $50, $100, $500, $1,000 or more (up to the maximum allowed contribution of $5,000 per individual) to our campaign supporting Joe Miller, we can overcome the dirty tricks of Lisa Murkowski’s campaign. Contribute online – HERE.

Lisa, are you going to shut down my Facebook page for writing this? 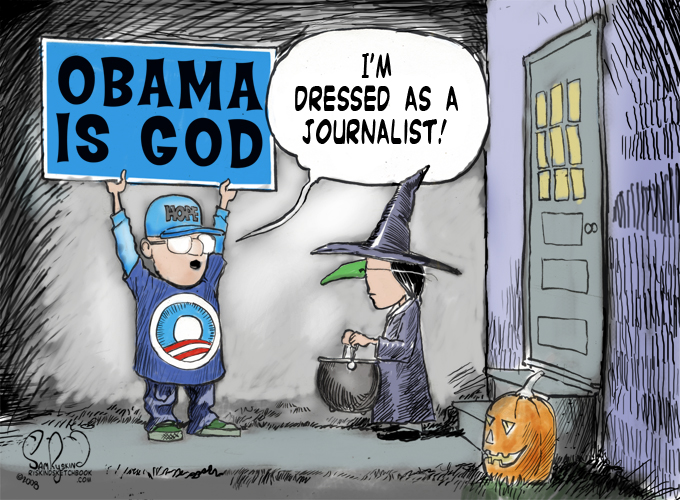 In the spirit of Halloween, Zombie has written a poem that is devastatingly and spookily on point…

The Department of Free

This is a poem that speaks to the very heart of what we are facing and fighting against. Read it and pass it on… Vote Nov. 2nd!

(ON THE ROAD ACROSS AMERICA) – The Tea Party Express, currently on its 4th national bus tour ahead of the Nov. 2nd Midterm Elections was joined once again by Gov. Sarah Palin who made a surprise appearance at Saturday’s rally in Wheeling, WV along with U.S. Senate candidate John Raese.

Palin was received like a rock star by the super-charged crowd, similar to the excitement she’s generated in rallies in Reno, NV and Phoenix, AZ. 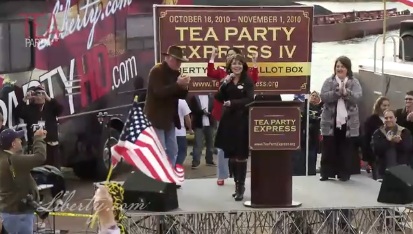 The Tea Party Express continues on this Sunday with rallies in Harrisburg, PA; Wilmington, DE and Toms River, NJ. Complete details on the upcoming events are listed below: