The old Soviet front World Federation of Democratic Youth has been organizing (usually) quadrennial international youth festivals since the 1940s.

The Seventeenth Festival is to be held in Johannesburg, South Africa in December.

Here is Jesus Mora, Secretary-General of the World Federation of Democratic Youth, being interviewed for Telesur regarding the 17th World Festival of Youth and Students.

Unfortunately this is in Spanish, but the graphics are explicitly communist.

According to the Communist Party USA news site People’s World:

Thousands of youth and students from countries across the globe will convene in South Africa Dec. 13-21, to participate in the 17th World Festival of Youth and Students. The festival will take place in Johannesburg.

A U.S. preparatory committee and delegation is in formation. 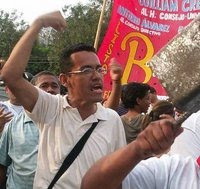 Jordan Farrar, 27, is a leader with the Young Communist League USA from Baltimore and has been organizing youth in the U.S. to make the journey. The YCL is one of several groups expected to participate in the event. In the past, peace, civil rights, student and youth from the labor movement have participated.

He said he’s super excited to attend the festival.

“The U.S. is perceived as carrying a lot of baggage, however this is our time as young people to show the world that we want change, peace and justice,” he said.

How much publicity will this delegation of potential future traitors, spies and Democratic Party congressmen receive from the MSM? Does the F.B.I. even know who these people are?

Will some of them come back to help Barack Obama, the Communist Party’s “friend” make more “small steps to really advance the lives of ordinary working people and youth?”

Maybe that won’t be fast enough for these young radicals.