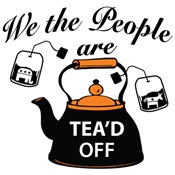 Chris Christie Coins What Would Be the Perfect Campaign Slogan – from The Corner:

“Let me help you pack.” That’s what Gov. Chris Christie told one of the state’s top administrators when that administrator commented publicly that he could leave New Jersey and go to another state if his $242,000 total compensation were to be capped under the governor’s proposed rule.

And let the American people show you the door jackwagon… And one more:

The day before the meeting Seitz is quoted in the Daily Record as saying, “Because of the proposed salary caps, I have to look at my future and the financial welfare of my family. I certainly would have options if I didn’t feel the compensation in this district, or New Jersey, is appropriate.”

The governor reacted to Seitz’s veiled threats to leave New Jersey and go to a nearby state where there is no state salary. “I will say in response to Mr. Seitz, ‘Let me help you pack.’ We have real problems in our state that we have to fix and we don’t have the time, nor the money, nor the patience any longer for people who put themselves before our citizens,” Christie railed.