The newly formed Chicago Unemployed Workers Council mentioned in the last post, is a tool of the Communist Party USA.

The Party plans to set up similar organizations all over the U.S. in order to create its own army of unemployed militants. 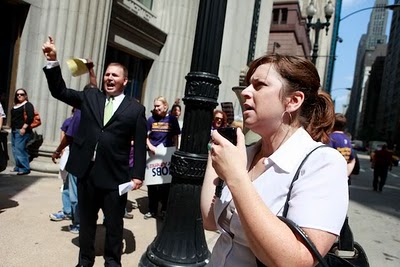 Susan Hurley is effectively the leader of the U.W.C. She is also Executive Director/Lead Organizer of Chicago Jobs with Justice which has long been dominated by the communists and their Marxist allies from Democratic Socialists of America. Hurley is a veteran of SEIU, George Soros’ now defunct America Coming Together and more recently, MoveOn.org.

Here’s a promotional video for the U.W.C. featuring Hurley, a cameo of Communist Party labor secretary Scott Marshall at 27 seconds and a speech from 91 year old Communist Party veteran Beatrice Lumpkin at 3:34.

Bea Lumpkin (the mother of Google Health Advisory Council member Dr. John R. Lumpkin) recalls how the communists used the unemployed to pressure Roosevelt to set up a huge public jobs schemes in the 1930’s, the Works Progress Administration and the Civilian Conservation Corps – which were then promptly taken over by the communists.

The modern communist scam is “Green Jobs” – so the Marxists can work for the revolution on your taxes.

The communists then organize those unemployed to pressure the Administration for “Green Jobs” and huge public works programs.

The communists then colonize those organizations and programs and use them to pressure Obama for still more socialism.

Meanwhile, you and your family pay, in gold and grief, the entire cost of your “liberation.”