America’s communists want to organize a growing army of unemployed workers into a militant force to pressure the Obama Administration into delivering a new “New Deal.”

The Communist Party USA plans to recreate the communist controlled Unemployed Workers Councils of the Depression era as part of a “pressure from above, pressure from below strategy” to squeeze the American middle class into accepting more socialist controls. 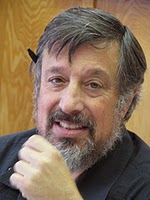 I believe the moment calls for the unemployed to become an organized political force unto themselves – not apart from but fighting alongside as an integral component of the organized labor movement.

No individual or movement can advocate with as much moral authority for desperately needed jobs as the jobless themselves.

By taking a direct hand in helping the unemployed organize themselves, and bringing them into the House of Labor, a much expanded organized labor movement can leverage its new-found power on the legislative, electoral, union organizing and collective bargaining fronts.

As the organized labor movement takes the legislative battles into the street, the newly organized unemployed, with little to lose and much to gain, will bring added militancy to street heat.

Lopez gives the example of a new Communist Party initiative in Chicago and calls for its replication all over the US. 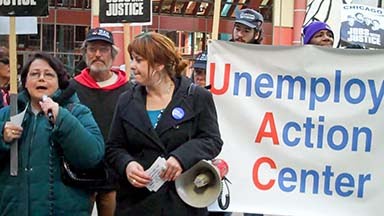 Pioneering grassroots initiatives on the left like the Unemployed Workers Council recently launched by Chicago Jobs with Justice, and the Unemployed Action Center in Chicago need to be encouraged all over the country.

Then according to Lopez, the organized unemployed need to link up with labor and other forces such as the NAACP and La Raza to work for a new “New Deal.”

In the 1930’s, the unemployed didn’t have enough allies in labor and the social movements. The communists don’t plan to repeat that mistake:

Local unions, community service groups and social justice organizations are gradually being drawn into the projects, giving these formations breadth and resources with which to carry out their activities.

Such local grassroots initiatives, multiplying across the land, could help labor, community service and social justice organizations come together more fully at the regional and national levels.

While drawing lessons from the rich experience of the Unemployed Councils of the 1930’s Great Depression, that gave impetus to President Roosevelt’s New Deal, present formations are emerging and being shaped by today’s conditions. Then, the Communist and left-inspired jobless movement had to go it alone, with little cooperation from a trade union movement whose leading trends tended to be insular and narrow-minded.

Today’s organized labor movement is emerging as defender of all workers, unionized or not, and of the people generally – forcefully taking on racism, anti-immigrant hysteria, gender and other forms of discrimination so destructive of unity and social progress.

The AFL-CIO, its affiliates, related organizations, and unions in the process of rejoining it, have already shown the will and capacity to conduct coordinated campaigns reaching out to union members as well as non-union workers and their families.

Nor does the labor movement have to do this on its own.

Others in the “One Nation” coalition, like the NAACP and the National Council of La Raza, can play a role.

The goal: use the unemployed and their allies to intimidate, attack and sideline the Tea Party movement. This will clear the way for more “economic stimulus” a “green economy” and “in a much-changed political environment – a new “New Deal.”

In other words, Obama’s re -election in 2012, massive public works programs controlled and milked by communists and a major expansion of government power – socialism.

Working together with today’s labor movement, the newly organized jobless can turn their wrath on the Republican and tea party arsenal of lies, including the boogey-man of big government and deficit spending, rather than striking out with behavior such as racism and anti-immigrant hysteria that’s destructive of others, and self-destructive in the end.

Thus, they can become a potent force fighting for jobs with a new stimulus package, public works, transportation and production infrastructure, conversion to a green economy and – in a much-changed political environment – a new New Deal.

The unemployed can potentially play a pivotal role in the crucial 2012 elections and allow the Obama coalition to regain the initiative.

Instead of fighting with one hand tied behind its back, the labor movement will be able to punch back with both.

Contributing with ideas as well as financial and staffing resources, the union movement’s direct engagement will make a world of difference to the desperately needed jobless movement and to labor’s overall fighting capacity.

What’s more – today’s jobless workers, when organized, will be tomorrow’s union organizers in the workplace.

It happened in the 1930’s and there is no reason it can’t happen again as jobs open up.

From dispirited victims, jobless workers can transform themselves into spirited molders of their own and the nation’s destiny.

The Communist Party understands better than anyone – never let a crisis go to waste.

Will unemployed American workers become tools of the Communist Party and its “friend” Barack Obama who destroyed their jobs in the first place?