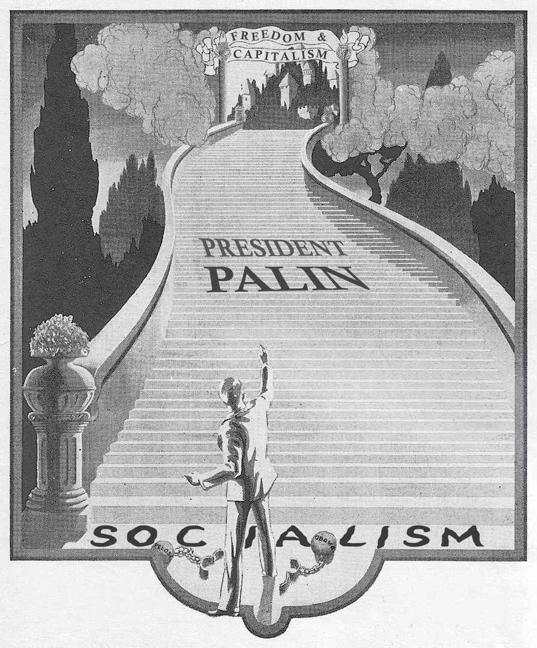 Sarah Palin represents “old-fashioned” values. You may see that as a good thing (if you’re conservative) or a bad thing (if you’re liberal). But whatever side you’re on, we pretty much all agree that she’s peddling a return to a hazy golden era of American history before the big-government welfare state arrived on the scene and ruined (conservative) or fixed (liberal) everything.

It may feel appropriate when progressive groups use outrageous postmodern propaganda to promote a postmodern ideology — but the disconnect of Palin (and the movement she represents) using 21st-century technology to summon a bygone America has always left me a little unsettled.

Shouldn’t we be using retro propaganda techniques to promote a retro ideology?

“Red Dawn” has been remade – but will it ever be released?

The original 1980s classic movie was the story of an invasion of the US by Soviet, Cuban and Nicaraguan forces.

This time its Red China and their Russian allies. 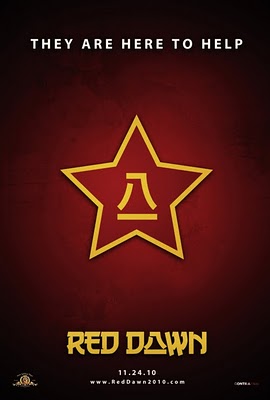 Set against the backdrop of contemporary politics, the film begins with an American withdrawal from Iraq. The President decides to redeploy troops to Taiwan, where escalating Chinese militarism is threatening America’s ally. At the same time, he also welcomes the former Soviet republic of Georgia into NATO, unleashing Russian worries that America is spreading its sphere of influence deep into Eastern Europe. Having destabilized relations with two of the world’s largest powers, the President then claims that the U.S. is only partly to blame for a global economic meltdown, further escalating tensions with China and ultimately leading to the invasion of the Pacific Northwest.

I do have a problem with this scenario, as it blames US ineptitude for provoking the invasion. In reality the Chinese and Russians have long been planning to take down America, regardless of what America does.

However, if it is released, every American, every Westerner, should see this movie – not for entertainment, but as a warning.

Here’s an official video on the movie set in Michigan:

The film was scheduled to be released on November 24, 2010, but is now in limbo due to MGM’s current financial problems.

The film has also sparked major controversy in China. According to Film blog:

On the topic of the controversy brought up by the film (which hasn’t been shown publicly, mind you) there were strong words from a state-run Chinese paper after the script recently leaked out.

“U.S. reshoots Cold War movie to demonize China” and “American movie plants hostile seeds against China,” were the headlines last week in the Global Times, published out of Beijing. Articles went on to say that the film has roots in a deep American fear of Chinese power. “China can still feel U.S. distrust and fear, especially among its people. Americans’ suspicions about China are the best ground for the hawks to disseminate fear and doubt, which is the biggest concern with the movie ‘Red Dawn,’” went one piece.

No doubt Hitler would have protested an anti-Nazi film made in 1938 as well.

Perhaps some patriotic American billionaire will buy the film from MGM and release it himself.

It would be a great service to free peoples everywhere.

We celebrate Thanksgiving later this week, a chance to express gratitude for the many blessings we’ve been given. I’ve heard it said the Lord is fairly busy and expects us to provide blessings in His stead. We’re to take care of those around us, feed and clothe those in need.

My wife and I have had a soft spot in our hearts for young missionaries going about sharing the gospel for two years without any recompense. We sign up to have them over for dinner when the opportunity presents itself. During table conversation we get their parents address or email and later send a note letting their parents know how grateful we are for the service being provided, that their young missionary is doing well and sometimes send a photograph taken while they were with us.

Our oldest daughter was on her mission and happened to be invited for dinner while serving in the Salt Lake City South Mission. During the course of the evening she was distracted by a framed picture on the mantle of the host family’s fireplace. “I know this is going to sound odd; but why do you have a picture of my house over your fireplace?”

There was no mistake; it was a picture of her missionary son standing in front of our house. He and his companion had enjoyed a meal and were taking turns, doing their best “Prophet Joseph” pose while in the front yard just as the sun was setting. In this digital age it didn’t take a moment to capture the images and send them along via email. 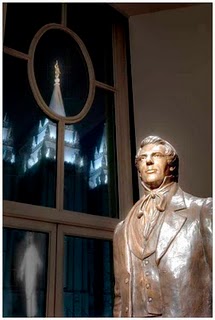 Thanksgiving isn’t for a single day each year; it’s an attitude which should be in our hearts daily. Express your gratitude through serving others; what goes around comes around.

Published the year before I was born, I first read Ayn Rand’s “Atlas Shrugged” at the the age of 17 – it was like being smacked on the forehead with a cricket bat.

Now 53 years after it first hit the bookshelves, Rand’s masterpiece is finally being made into a movie.

From a reader. A pioneering puppet/animation film from Russian expat Wladyslaw Starewicz.

Made in 1922, supposedly for children, there is a strong political/moral theme throughout…

Man’s age old desire to pass responsibility up the line to a higher political authority and the inevitable enslavement and death that decision entails.

The accompanying music, though possibly not original, is spooky and very cool. 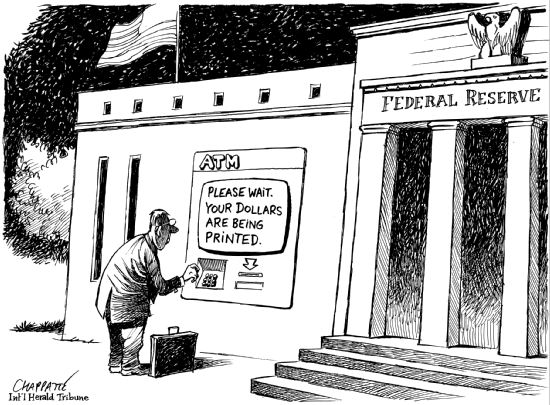