Statement by Mr. Viv Forbes, Chairman, of the Australian based Carbon Sense Coalition:

The Chairman of “Carbon Sense,” Mr. Viv Forbes, said “we do not want a repeat of the Copenhagen obscenity when 45,000 people gathered to discuss how to reduce things like air travel and conspicuous consumption.”

Forbes said there is no reason for Australia to attend:

“This conference is no longer about climate – it is about international redistribution of wealth and industry from the west to the rest of the world. Australia is part of the spoils they hope to redistribute.

“There is zero chance of global agreement on emissions trading schemes or more carbon taxes. The political landscape and public opinion in the USA has turned dramatically skeptical of the increasingly shrill predictions from the desperate alarmists. Moreover, trading in carbon credits in Chicago has collapsed and even Al Gore is recanting on ethanol. Without US participation, nothing will be agreed globally.

“In addition, for over a decade, the whimsical world climate has mocked the feverish forecasts of the IPCC. Global Warming looks like becoming Global Cooling (still caused by burning coal of course). Prudently they chose tropical Mexico for this conference or the world media would be treated again to the amusing spectacle of warmists shivering in another bitter northern winter of “unseasonal” snow and blizzards.

“So they are plotting a new scheme – enforced global rationing of carbon emissions on a per capita basis. This means transfer of Australian wealth, industry and jobs to India, China and Africa for decades to come. And to bypass parliaments and the suspicious electorate, this will be attempted via “International Agreements.”

“Australia should send no more than one observer to Cancun, and that person should have no power to agree to anything. In particular there should be no promises to extend the failed but costly Kyoto Accord, and no transfer of authority to any new international body.

“A boycott makes more sense than sending jumbo jets of people to talk about reducing that sort of activity.”

New Zeal – Same for New Zealand, Canada, the U.K. and all other pro-Western countries.

Some variation of this scenario – probably with a full blown shooting war thrown in – is inevitable, unless the U.S. stops debauching its currency and starts balancing its budget with real money.

People need to understand – the laws of economics are just as immutable as the laws of physics.

You can no more cheat the law of “supply and demand” than you can defy the law of gravity.

Iceland Is No Ireland as State Free of Bank Debt, Grimsson Says (Hat Tip: Brian B.)

The Fate of Freedom and Democracy in Europe (Hat Tip: Jean Stoner)

Pension reserve funds to be spent on banks 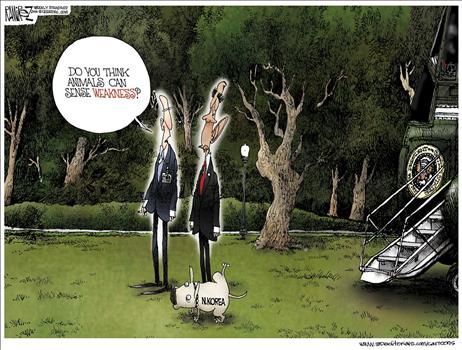