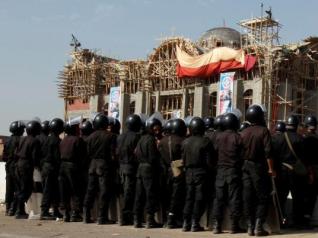 The delegation, which will include two Copts who are agents of the regime, will come to dispute and contradict the information related to Egypt in the International Religious Freedom Report issued by the U.S. Department of State.

On or about November 17, 2010, the State Department issued a report citing violations against Copts of Egypt. In the report, Egypt was included among thirty countries with human rights violations.

The report emphasizes the Copts’ dilemma of constructing new churches and repairing existing churches under laws that forbid them to do so. The report also briefly referred to the relationship between Muslim aggressors and Coptic victims in the court system.

Based upon the Shariah law included in the Egyptian constitution, any Muslim converted to Christianity meets harassment and death threats.

The editor-in-chief of the regime’s newspaper, Al-Ahram, on November 22, 2010, stated that the U.S. preaches evil and should not be allowed to monitor or interfere in Egypt’s internal affairs. He continues to say that Christians and Muslims have no problem living together in harmony.

Meanwhile, the Al-Ahram newspaper has not yet condemned the brutal attack which took place a few days ago against Copts demonstrating inside the construction site of their church in Giza where three men were killed by bullets from the regime police.

In a telephone conversation yesterday with an officer of the U.S. State Department, Voice of the Copts learned that his office had no knowledge of the upcoming visit by the Egyptian delegation.

The inclusion of two Copts within the delegation to argue there is no discrimination against the 15 million or more Copts living in Egypt is manipulative.

Meanwhile, Voice of the Copts considers such a visit as interference in the sovereignty of the United States of America and is a clear indication of the two weights and two measures used in the Arab-Muslim world.

The following are names of some members of the delegation and their occupations in the Egyptian regime:

Voice of the Copts is asking the U.S. State Department to reject any interference in our internal affairs from this delegation of a foreign state and to stand beside all those who collaborated and issued the International Religious Freedom Report. Furthermore, we demand that the U.S. State Department question the members of this delegation regarding the following issues:

– The last regime attack on civilian Copts using bullets resulting in the death of three persons and leaving others in critical condition.

– Update on the killing of Copts in Eastern Christmas Eve while leaving Church in Nag Hammadi.

– The attack on Copts in various towns in Upper Egypt and other cities, leaving Coptic businesses and homes destroyed.

– The United Nations Rapporteur still has not received any response from Egypt concerning Hegazy’s case to state his new faith on his I.D. Is the fatwa issued for his death still ongoing?

– Explain the photo of fraud taking place in your election a few days ago in spite of the fact that Al-Ahram newspaper states that Americans need to learn democracy from Egypt.

Voice of the Copts demands basic human rights for all Egyptians and to end persecution, discrimination and oppression of the Copts NOW.

See our research on George Soros at KeyWiki…

Bank Of America Selling Accelerates, As Fears Spread That It’s In The Wikileaks Crosshairs

Citi: Ireland, Greece And Portugal Are Insolvent, Spain Will Be Soon, Italy And Belgium Are Threatened

Case Shiller: Here Are The 15 Housing Markets That Will Fall The Most By 2012

Markets Slammed As Bulls Blow It In The End: Here’s What You Need To Know

What Do The PIIGS, California And A Chinese Village Have In Common?

Hiss of a Smart Grid

Euro Declines as Europeans Wise Up

The Dual-Mandated Failures of the Federal Reserve

Death Comes For Us All

Stop Them From Eating My Town (Hat Tip: Brian B.)

China’s double-digit economic growth over the past thirty years has been breathtaking. Growth has limits, however, and China may soon be reaching them. With worldwide recession and inflation coming to the yuan, a slowdown in China’s growth is increasingly probable. If China experiences any letup in growth, the nation’s internal stability becomes a concern. The modern Western trait of rising expectations has set in with the populace. By their sheer numbers, any setback in the standard of living could ominously jeopardize the nation’s political and economic structure — and affect us as well.

Why Eric Sprott sees silver as the next big investing windfall (Hat Tip: Brian B.)

Observing the Spread of the Sovereign Debt Crisis

After meeting, Obama and Republicans hopeful about a deal on Bush tax cuts

Will Jean-Claude Trichet Uncork The Mother Of All QE Programs?

Basically, Everything In Europe Comes Down To Her

2M Lose Jobless Benefits as Holidays Arrive – This is the chaos the unions and communists want. The timing was not an accident.

WH to Impose Ban on New Drilling Off Fla. Coast – Court rulings and law be damned. We are officially being ruled by a dictator.

A case of the wrong case: U.S. cities forced to spend millions changing street signs (because they are in capital letters) (Hat Tip: Jean Stoner)

Islam expert: Developers will get money for mosque (Hat Tip: Brian B.)

Bonds sink on report of US aid to Europe

US TO BAILOUT EU

Cash-Strapped Newark Forced To Lay Off 14% Of Police Force

GOP Will Filibuster All Bills if Taxes, Budget Not Addressed

The Littlest Victims of Obamacare

The Fiscal Commission’s Moment of Truth

Time’s up for the President’s Deficit Commission

Is the Collapsing Empire and Its Police State Worth Fighting For?

The Forest, the Trees and the TSA

We Are All German Jews Now

Currency Crisis! So What Happens if the Dollar and the Euro Both Collapse? [JWR Notes: I predict that both will collapse, but that the Euro will tank first. This will mean a brief upswing in the value of the U.S. Dollar. As I’ve noted before, that brief interim will likely provide a window of opportunity to buy precious metals.]

Number of the Week: 492 Days From Default to Foreclosure.

World at a Boil with War and Economic Crisis

Spain Could Be Forced to Seek a Bailout Within Months, Says Barclays

Spain, Portugal and Belgium to Follow Ireland into the Abyss