Supporters of the ultra-Maoist Communist Party of Peru are gathering in Hamburg, Germany to co-ordinate international support for the Peruvian revolution and the expansion of Maoist revolution worldwide. 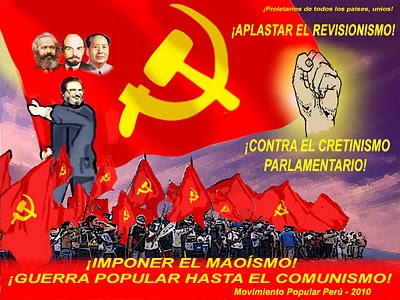 The Communist party of Peru almost conquered Peru in the early 1990s through their Sendero Luminoso (Shining Path) guerrilla movement.

Their U.S. affiliate is known as the Revolutionary Communist Party, which is led by former Students for a Democratic Society leader Bob Avakian.

Comrade Bob has recently returned to the U.S. after many years of self-imposed exile in Paris – probably to take a more active role in an expected uptick of revolutionary upsurge in his homeland.

We invite all who are part of the International Communist Movement to participate in the International Conference organized by Peru People’s Movement (MPP), commissioned by the Central Committee of the Communist Party of Peru on December 4, 2010 in the city of Hamburg in Germany. This conference is a continuation of the conferences we have held this year in Stockholm (Sweden) in April, Madrid (Spain) in May and now last in September in Milan (Italy). The purpose of these conferences is to develop the debate within the International Communist Movement in accordance with the provisions of the Central Committee of the PCP in a document that was sent to the first of the conferences held: “The objective of the present event is to serve in making the leap that the world revolution demands. The PCP puts forward the realization of an expanded Conference of the RIM with the participation of all the members, in order to address, from our position, the following points:

1. Evaluation of the application of Maoism. The fundamental point in Maoism and the Great Cultural Revolution.
2. The Experience of the international proletariat, principally of those who develop people’s war.
3. The struggle against today’s revisionism.”

Whatever their other faults, the Maoists certainly produce the best posters.