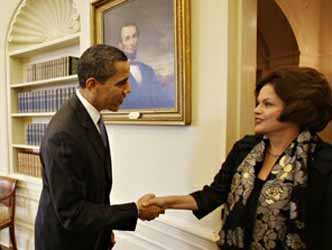 Earlier this afternoon, President Obama called Dilma Rousseff, President-elect of Brazil, to congratulate her on her historic victory in yesterday’s election. He commended the people of Brazil for their faith and commitment to democracy. He also underscored the excellent working relationship between the United States and Brazil, and his commitment to deepening this cooperation and exploring new areas of collaboration.

President Obama told President-elect Rousseff that he looks forward to meeting with her soon, and working more closely on areas such as clean energy, global growth, reconstruction assistance for Haiti, collaborative development efforts, and other issues of global importance.