Coming to an American city near you…

Commodities – Crude oil tipped to bubble over $100 a barrel (Hat Tip: Brian B.)

CYBERWAR: Now Hackers Have Taken Down Mastercard.com As Revenge For Julian Assange

REVENGE: Hackers Announce They Will Try To Take Down Visa.com In One Hour

Stocks Creep Higher While The Bond Rout Continues: Here’s What You Need To Know

Tom Friedman Hysterically Describes The State Of The US Economy

James Turk: You Should Also Take Your Silver Out Of The Banks

Check Out The Greatest Hits Of Operation Payback, The Hackers That Took Down Mastercard

Boycott Wal-Mart If You Want to Help Save America From Big Brother (Hat Tip: Brian B.)

Wikileaks: Stop Us? You’ll Have to Shut Down the Web (Hat Tip: Brian B.)

Rush: Obama committing over 1% of GDP to UN for climate change (Hat Tip: Brian B.)

American Retirement Funds at Serious Risk of Being Seized (Hat Tip: Brian B.)

Coming soon to your local Walmart

One Chart To Rule Us All (Hat Tip: Larwyn)

Gold and Silver Ebb, but Not the Larger Trend

Home Values to Drop by $1.7 Trillion This Year, Zillow Says

Anarchy in the U.K. as Tuition Hike Passes

Napolitano Announces Expansion of “If You See Something, Say Something” (Hat Tip: Jean Stoner)

Why Crude Oil Is Poised To Surge To Over $100/Barrel

Thousands try to break through police barricades at Houses of Parliament

POLL: Most Americans Say They’re Worse Off Under Obama

US Treasuries hit by biggest sell-off since LEHMAN

Carbon Marts Launch Around the World

The Abdication of the West (Hat Tip: Jean Stoner)

Life Is Not Pretty in Argentina’s Pink House

Who Says There Aren’t Any Good Jobs Out There?

Has The Fed Lost Control Of The Bond Markets? (Hat Tip: Jean Stoner)

America’s Message To The Rest Of The World: You Send Us Oil And Cheap Plastic Gadgets And We’ll Send You Our Wealth And Prosperity

AFL-CIO Leader Accepts Communist Party Award: ‘I Stand With Them’

Lawrence O’Donnell Loses it With Alan Grayson Over Tax Compromise

We’re all doomed!!! We still haven’t woken up to how much poorer the West is going to be in the future…

U.S. Facing Federal Debt Cataclysm, The Establishment Is in Despair

The Fed Has a $110 Billion Problem with New Benjamins

Consumer Credit Jumps by Most in More than Two Years

Eurozone on Brink of Meltdown

“The current Irish government has agreed to borrow something like $88 billion euros to shore up their banking crisis. That is about $27,000 for every man, woman, and baby in Ireland, a rather small country with a little over four million people.” – John Mauldin 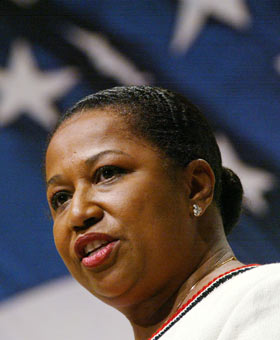 Braun has long had close ties with the Communist Party USA. In 1978 she was a leading member on the Committee to Elect John Lumpkin for the 7th Ward Alderman, Chicago. Lumpkin was the son of prominent Chicago CPUSA leaders Frank Lumpkin and Bea Lumpkin. Also that year, Braun was elected to the Illinois State legislature where she became legislative floor leader for CPUSA-linked Congressman Harold Washington.

In November 1979, she was a co-sponsor, with Congressmen Ron Dellums and John Conyers of the founding conference of the CPUSA-led U.S. Peace Council, an affiliate of the Soviet controlled World Peace Council.

When she ran for the U.S. Senate in 1992 on the Democratic ticket, she enjoyed the support of the CPUSA just as her friend and colleague Washington had done. In 1978, the Socialist Party USA put their support behind Braun in her campaign for Rep. Robert Mann’s old U.S. Congress seat. In the early 1980s, Braun, Washington, Danny Davis, Frank Rosen and long-time friend Timuel Black were members of the Committee in Support of Southern Africa. In 1992, the Democratic Socialists of America-infiltrated Chicago Democratic Party persuaded Braun to run for the U.S. Senate. They then “produced votes to back up [their] pledge of support.” The Council for a Livable World also endorsed her in the race. Institute for Policy Studies and Campaign for America’s Future leader Robert Borosage has served as an issues adviser to the campaigns of Braun, Barbara Boxer and the late Paul Wellstone. In November 2010 Braun announced that she will be running in the 2011 Chicago mayoral election.