Activist economist Jeffrey Sachs was once a hero of mine.

Now I regard him as a very dangerous and influential opponent of liberty and national sovereignty.

In the 1990s, I was impressed with Sachs, as the then-Harvard professor, toured the world urging former communist and basket case third world economies to adopt free market economic policies.

By the late 1990s, I was alarmed. The man I once admired had thrown in with the United Nations.

Jeffrey Sachs is Director of the UN Millennium Project and Special Advisor to United Nations Secretary General Ban Ki-moon on the Millennium Development Goals, the internationally agreed goals to reduce extreme poverty, disease and hunger by the year 2015.

All this globalism was bad enough, but by the 2000s, Sachs was hanging out with socialist financier George Soros. 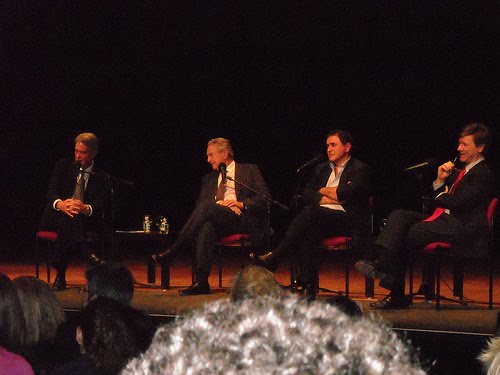 Panelists George Soros, Nouriel Roubini and Jeffrey Sachs at “Can we save the World Economy,” October 20, 2008

Sachs and Soros have shared many platforms in recent years and Soros’ Open Society Institute has funded one of Sachs’ African projects to the tune of $50 million.

This sealed it for me though.

In December 2009 Sachs addressed a meeting of the Party of European Socialists in Prague.

He makes it clear that while he still supports “markets,” he is in essence a redistributive socialist.

Sachs goes on to praise the socialists’ “strong commitment to universalist ethical principles and fiscal re-distribution…” He is also happy that the socialists have kept “campaign financing as a public commitment, not dominated by private money…”

Sachs makes it clear that the United States should be the major funder of his globalist vision. He also calls for an international financial transactions’ tax and a carbon levy – both to rein in capitalism and to finance the West’s “commitments” to the world’s poor nations.

Sachs calls for a “global fund for health,” one for “education” and another for “climate.”

The war in Afghanistan, the troubles in Gaza, even Somali piracy can only be ended through “sustainable development.”

Sachs ends with a plea to the Party of European Socialists to “make common cause with the progressives of the United States, so that we too, may find a political course back…we too, need to find your wisdom, we need to make common cause in that effort… Your cause is a European cause, but it’s also a global cause… I so much admire you for that.”

Jeffrey Sachs has basically outlined the Soros agenda. The reduction of the United States to a subservient milking cow for global socialism.

Communist and former Obama “Green Jobs Czar” Van Jones proves he’s just as much a revolutionary socialist as ever, at the Facing Race Conference, Chicago, September 28, 2010.

“We can’t just leave the Federal Government in the hands of our enemies and expect to make a lot of progress….”

Liberals are ratcheting up their calls for Revolution. It’s time we send a letter like this to all Senators:

We hope you are aware that Community Organizers are openly discussing the need to riot – to “govern from below.” Their rallying cries espouse violence, as evidenced in their media interviews and university organizations and most troubling is the divisive rhetoric we’ve heard from President Obama (e.g. “punish our enemies”).

CNBC reported that the Pentagon is strategizing for a potential uprising and military training for civil unrest is well under way. Those closest to the President – union leaders, the President’s former Green Jobs advisor and many other radical, anti-American socialist and communist organizations – are the ones calling for the uprising. Those are the organizations and individuals our intelligence resources need to be directed toward, not peaceful, law abiding citizens – not the general population.

It’s crucial that you know these violent Community Organizers are finite – a small subset of the population. The majority of Americans are peaceful, law abiding citizens who would not partake in a violent uprising.

Therefore we expect you to ensure that house-to-house raids do not occur and that citizens’ possessions and property are not seized. We refer you to the aftermath of Hurricane Katrina when these tactics were employed without any reasonable suspicion; it’s your responsibility to ensure this does not happen again.

The oath you took legally binds you to support and defend our Constitution, including the protection of every State in this Union from invasion. Our Bill of Rights clarifies our rights and defines what cannot be done to American citizens. It is your legally binding responsibility, regardless of circumstance, to uphold the Constitution and protect our rights.

This letter ensures that you and all government employees will not be able to claim “I didn’t know” or “I was just following orders.” We’re confident you will ensure that our rights are protected.

We also want to inform you of the unconstitutionality of DHS’ 2009 report which attempts to define peaceful citizens as ‘terrorists.’ The RAND Corporation 2009 Report: “A Stability Police Force for the United States” that describes the feasibility, methods and cost associated with circumventing the Posse Comitatus Act which precludes military personnel from exercising police functions in a civilian setting and Executive Order 12425 authorizing the International Police force (INTERPOL) to operate within the U.S. with immunity. We expect you to ensure these instruments are not put into effect as they are in direct violation of our Constitution and the legal rights of American citizens.

Lastly, the New START Treaty must not be ratified. U.S. National Defense must remain under full control of the U.S. and must not be dependent upon, dictated by, or merged with Russia. China is fully aligned with Russia, Iran, North Korea and other communist/socialist countries who continue their quest to become the world’s superpower. Their intention is to defeat America and all clear-thinking Americans know this. We urge all Senators to recognize their legal obligation to uphold their oath of office and VOTE NO on the destructive and severely flawed New START Treaty.