Major donors to Harry Reid and Barack Obama’s campaigns are backing a Chinese company, A-Power Energy Generation Systems. A-Power is a small Chinese manufacturer, founded in 2007, as China’s interest in “green energy” was beginning to take off. 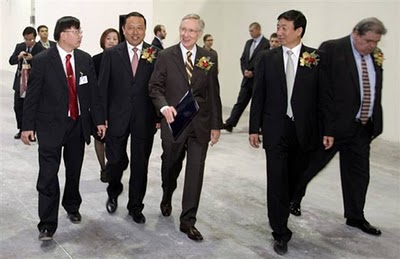 The wind farm, first announced more than a year ago, would consist of 300 2-megawatt wind turbines, each perched atop a 26-story-tall steel tower and spinning three blades — each half the length of a football field. The farm would span three counties and 36,000 acres in West Texas land best known for its oil. Dubbed the Spinning Star wind farm, the project’s 600-megawatt capacity is, theoretically, enough to power 180,000 American homes and would be the sixth-largest wind farm in the country.

It is being planned by an unusual joint partnership between the U.S. Renewable Energy Group, a Dallas investment firm with strong ties to Washington and the Democratic Party, and A-Power Energy Generation Systems, an upstart Chinese supplier of wind turbines. Filings with the Securities and Exchange Commission indicate the Chinese are bringing financing and the turbines.

Besides the $450 million stimulus grant, A-Power’s SEC filings indicate the joint-venture also will pursue a Department of Energy-backed loan guarantee.

All too often the response from many who call themselves conservatives is, “it will increase employment and help business, so stop complaining. Sure, it’s not ideal to have the Government injecting capital to get the venture off the ground, but in the end it will be best for the economy.” But as I pointed out in a recent post, when we allow the Government to get involved with business deals, corruption is never too far away. And inevitably, market-failures will be propped up with tax-payer dollars, leaving struggling, hard-working business owners even worse off.

But it gets better. Key backers of this wind farm initiative are themselves major backers of the Democratic Party:

The investment group’s public face is often Cappy McGarr, a wealthy Texas philanthropist, investor and longtime fixture in Democratic politics, who has given heavily to Democratic candidates across the country and was an early backer of President Barack Obama’s presidential campaign. Joining McGarr in Dallas is Ed Cunningham, a former executive for several large Western entertainment companies in China, a 2002 Democratic senatorial candidate and a former member of Obama’s national finance committee.

Two registered lobbyists with a long history of involvement in Democratic politics, G. John O’Hanlon and Moses Boyd, are the group’s anchors in Washington. O’Hanlon has been a party operative since the 1980s — a protégé of Democratic heavyweight Terry McAuliffe — and has given hundreds of thousands of dollars to Democratic causes. Boyd is a former senior Democratic Capitol Hill staffer turned lobbyist.

All told, these four and their spouses have given more than $1.8 million in campaign donations since 1990, with McGarr and his wife accounting for more than half of that. “That would place them among the top 100 donors of hard money overall…”

We had a very similar situation in New Zealand where Peter Jackson’s Lord of the Rings was filmed. Warner Brothers began preparation for filming of the NZ $670M two-part Hobbit movie, however unreasonable demands from New Zealand’s actor’s union caused Warner Brothers to reconsider shooting in New Zealand. However, Prime Minister John Key met with Warner Brothers, agreeing to offset their costs by NZ $30M, and actually passing a law through Parliament to enable the film to be made here.

And in other Hobbit news, a casting agent for the movie was fired recently when she told a Hobbit wannabe of Pakistani heritage that her skin tone wasn’t light enough. What next? A female seeks to audition for the part of Bilbo and then public outrage when she is turned away?