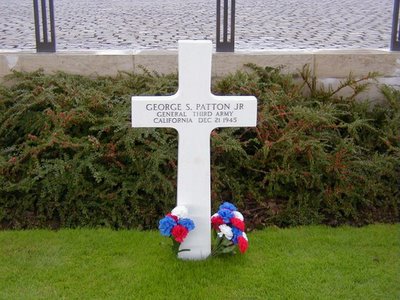 65 years ago, America’s Greatest WWII General died. George S. Patton, Jr. didn’t die on the field of battle, but instead as the result of injuries sustained in a freak automobile accident near Mannheim, Germany, on December 9, 1945. Patton survived two world wars.

General Patton was being treated for a severe neck injury at the 130th Station Hospital in Heidelberg, Germany, when he died on December 21, 1945. He was buried three days later, December 24, 1945, in the American Cemetery at Hamm, Luxembourg.

There’s a line in the movie, Little Big Man, which sums up how government keeps promises. The movie’s message had to do with our Federal government’s treaties with the Indians as spoken by Little Big Man, a white man adopted by the Human Beings, “This land was promised to the Indians for as long as grass grows green and the sky is blue…” As the U.S. Calvary massed its surprise attack on a snowy morning, the Human Beings peaceably secure on land promised them by treaty, “…but sometimes, the grass ain’t green and the sky ain’t blue.” It’s been a while, so I hope the quote wasn’t botched; most folks would understand the meaning anyway, keeping promises ain’t a strong suit for government.

I joined the Houston Police Department in 1971 and agreed to the terms of employment which included a specific salary, health insurance and eventually retirement, if I stuck around for a minimum of twenty years. The City would then pay 30% based on an average of the last 5 years of service upon reaching 20 years with incremental additions for each year of service beyond 20. Included in the package was the continuation of health insurance with a reasonable price tag for my spouse and any children living under your roof until they reached the age of 19.

Each time police officers went before the City to request a cost of living raise, it was a political battle. Sometimes we got a raise, but most of the time we ended up bargaining away a goodly portion as the City’s budget simply could not afford to keep up with cost of living adjustments. In return for being “reasonable employees,” the City in turn promised to make up a small portion by adding to retirement benefits as they agreed a raise was reasonable. The City simply could not afford to pay its police officers a reasonable salary. Over the twenty years I served, there were many raises which never came about; instead the 30% retirement figure originally agreed upon reached 55% of base pay.

Almost immediately after retiring from the Department in 1992, the cost of health insurance began to rise in leaps and bounds until most recently, that figure has more than doubled along with our co-pay for each visit to our HMO. The city found ways to back away from their “fair share” and explained to retired officers that health care was never part of a “contract” as it is with active duty officers; that health coverage was a bonus rather than a promise. So much for grass is green and the sky is blue.

Bradley Olson’s article in this morning’s Houston Chronicle, Battle lines drawn over city pensions, raised the stakes and once again the political battle has been brought to my front door. Mayor Parker claimed she was working in the best interests of the City by asking for reductions in unreasonable retirement obligations.

“Voters elected me to make tough choices, and voters elected me to get the city’s budget in order,” Parker said. “We are hemorrhaging right now … in some of our pension costs. There’s a difference between a fair pension and a gold-plated pension and the citizens of Houston have to know that we can find a fair balance in there.”

When I hear things like, “it’s for the common good” or “everyone must make sacrifices,” it usually means those who have earned must share with those who haven’t; typical socialist dialogue to justify wealth redistribution. In this case, Houston’s mayor wants to wheedle out of lawful contracts; not much different than her predecessor Bill White tried when he was mayor.

This is where my knee jerk reaction requires me to say, “Excuse me!,” loud and clear enough that folks at City Hall will wonder if it hadn’t been a clap of thunder. At one time my words would have been less refined, but one of my supervisors instructed me to employ the term, “Male Bovine Excrement!” when reason and logic dictate a more harsh or common expression. I actually received an official reprimand for criticizing a junior officer who’d used poor judgment in dealing with the public. It never occurred to me a police officer would be disturbed to hear a fellow officer use the term, “Barbara Streisand!” Perhaps he’d picked the wrong profession, one can only wonder.

‘“Plans that allow people to retire after 20 or 25 years at the age of 50 or 55 and get 80 percent of your salary for life are just unsustainable in this day and age,” said Ramon Fernandez, a professor and specialist in government accounting at the University of St. Thomas.”

Maybe Mr. Fernandez is talking about some other police officer with inflated numbers like the ones pulled out of the blue. I’m still at the same 55% and don’t have any golden parachute. I had to put my staff on half salary. You know, the folks who polish the brass on my private yacht. The yacht my wife and I sail down to The Marina at Bimini Bay Resort on weekends. I had to let the bank take possession of my Lear Jet 60 with its interior done in HPD blue, custom mahogany inlay paneling and 24 carat gold embroidered executive package seating. It had been parked at Hobby Airport for months and I could no longer afford to pay a pilot to be at my beckoned call. Being retired just isn’t all it’s cracked up to be.

If the City of Houston declared bankruptcy they could void any and all contracts previously made; handing the checkbook and everything else over to the courts. City services would come to an abrupt and noisy halt, chaos and pandemonium would be the norm as garbage service, firemen, ambulance, sewer and water services ceased and police officers no longer were paid; much less those who’d reached retirement. Civilization as we know it would pack its bags for other pastures where grass grows green and the sky is blue.

In essence Ramon Fernandez and Mayor Parker have made another statement, one which anyone can understand, reading between the lines. “While the City has entered into valid contracts with employees for retirement benefits, sometimes the grass ain’t green and the sky ain’t blue.”

Houston has joined many other cities across the nation, discovering their lack of fiscal responsibility. The liberal left’s entitlement programs have been instituted at the expense of necessary expenditures without a care for the eventual bill which always come due. As with any political football, police and fire employees are thrust front and center as a whipping boy, their salaries are the cause of all our ills and when they retire they live like kings off the backs of hard working citizens. Sorry Madam Mayor, I’ve heard this same song too many times; keep your hands off my retirement as long as grass grows green and the sky is blue!

The next time you hear someone say that America as a Democracy, I urge you to correct them. America is a Republic.

Our children are not being taught the true history of our nation and it’s imperative that we begin teaching them the truth. The following video does an excellent job of describing our American form of government.

The American Form of Government

The Radio Patriot – A Republic, if you can keep it.

Today the FCC voted to regulate the internet, but that’s only part of the story. Behind the scenes, President Obama has been working with the international community, not Congress, to institute government control of the internet.

Under the banner of cyber security, Melissa Hathaway, Obama’s former White House official, urged that the power of three regulatory agencies (SEC, FCC and FTC) be harnessed to bring about a “comprehensive solution set.”

The plan to take control of the internet was devised through the Atlantic Council’s Program on International Security. That’s right… the Obama administration has been working closely with other countries to develop strategies to usurp the U.S. Congress in order to execute plans which further his progressive agenda.

Melissa Hathaway forthrightly acknowledged that the results of the November mid-term elections created “greater Congressional constraints.” A PDF of her report is found HERE.

Unlike any President in the history of our nation, Obama brought charges of human rights abuses in the U.S. to the UN, he presided over the UN and his DOJ is actively suing one of our states (Arizona) for trying to protect American citizens. Obama has taken control of our healthcare, banks, car companies, energy, food supply, student loans and now the internet. Our national defense rests in the hands of Obama’s collaboration with Russia (New START Treaty) who is aligned with Iran, Venezuela, China and North Korea.

The answer is becoming more obvious by the day.