While I don’t support many of Ron Paul’s foreign policy ideas, I much admire his economic understanding.

He is by far the best mind in the U.S. House of Representatives when it comes to issues of rational economics, sound money and honest finance.

Here Rep. Paul argues that the best way out of the U.S. economic crisis is to end the Federal Government’s monopoly on minting money.

While the Federal Government is able to routinely debase its fiat money by simply printing to order, the U.S. economy will always be sick.

Rep. Paul wants to discipline the Feds and restore confidence in U.S. money by allowing private companies to produce gold and silver coinage and derivatives thereof. These currencies would be backed by real assets and subject to fraud and counterfeiting laws, not currently applicable to the Fed.

Strong economies are built on a strong, trustworthy currencies. Rep. Paul’s re-surfacing of a basic tenet of classic economics is very timely indeed.

What can I say about Maine’s Senators that you don’t already know? Yes, they voted to ratify the dangerous New START Treaty and they failed to research Russia’s alliance with countries like Iran, China, North Korea and Venezuela.

To ensure Senator Collins’ vote in support of the treaty, it appears she received a letter according to the Washington Post:

“For example, concern was ignited across Europe recently when stories appeared about Russia moving tactical nuclear weapons near the border of NATO countries. During last week’s Senate treaty debate, Secretary of State Hillary Rodham Clinton and Defense Secretary Robert M. Gates had to explain in a letter to Sen. Susan Collins (R-Maine) that a short-range ballistic missile unit had long been stationed near Russia’s border with Estonia. They added that Moscow had announced that its newer SS-26 short-range missiles would be stationed there.

Recognizing the unease such actions cause, the Clinton-Gates letter went on: “Although this deployment does not alter either the balance in Europe or the U.S.-Russia strategic balance, the U.S. has made clear that we believe Russia should further consolidate its tactical nuclear weapons in a small number of secure facilities deep within Russia.”

Their comment about the Russians moving their tactical weapons east and far away from Russia’s borders with NATO countries brings up what will be the first sticking point in dealing with Moscow about the weapons.

Despite the “R” next to their names, both are clearly Progressives. Senators Snowe and Collins have voted in favor of unconstitutional and fiscally irresponsible legislation time after time. Yet in election after election, the voters of Maine keep them in office. These “career politician” Senators have been in office since the mid-1990’s; Snowe was first elected in 1994 and Collins in 1996. Violating their oath of office is a common occurrence.

Here are just a few of the fascist and unconstitutional bills they’ve recently voted for:

Here is a couple that Senator Collins voted against:

Olympia Snowe is up for re-election in 2012 and Susan Collins in 2014. Is it possible to find constitutional any fiscally responsible people in the state of Maine who can run against these Senators in the primaries?

Regardless… Snowe and Collins join the 11 other Republican Senators who are traitors to America because of their vote to ratify the New START Treaty which is a huge mistake for America. 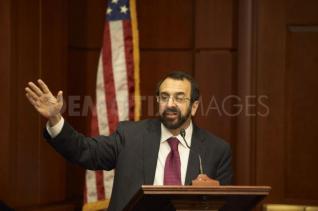 Robert Spencer is the director of Jihad Watch, a program of the David Horowitz Freedom Center, and the author of ten books, including the New York Times bestsellers The Truth About Muhammad and The Politically Incorrect Guide to Islam (and the Crusades) (both Regnery). He is coauthor, with Pamela Geller, of The Post-American Presidency: The Obama Administration’s War On America (Threshold Editions/Simon & Schuster).

Backroom deals won’t do Tennessee much good if America’s national security is compromised.

Tennessee Senators Lamar Alexander (R) and Bob Corker (R) must not have considered national security when they decided to vote in favor of ratifying the dangerous New START Treaty. They also failed to research Russia’s alliance with countries like Iran, China, North Korea and Venezuela.

It appears the Tennessee Senators were interested in bringing home the pork at the expense of our nation’s security. Zachary Roth’s December 23rd article states:

“It will likely include more than $6 billion dollars for a uranium processing facility, to be built at the Y-12 weapons compound in Oak Ridge, Tennessee (pictured). Indeed, the states’ two GOP senators, Bob Corker and Lamar Alexander, both said that money for modernization — and therefore, in all likelihood, pork for their district — was a key condition of their support.”

Senator Corker’s voting record has been relatively honorable, so it would be disgraceful if he betrayed the best interest of our country only to cave for a backroom pork deal.

Lamar Alexander is up for re-election in 2014. Unless he openly recognizes the damage he’s inflicting on our country by voting for unconstitutional legislation and a dangerous treaty, it’s time to search for someone else… a constitutional and fiscally responsible person who can run against him in the 2014 primary election.