The Blaze: Surprised? Famous Marine Drill Sergeant is NOT a Fan of Obama

His Geico commercial is one of our favorites. Mr. Ermey, we salute you sir! You are an American patriot and you are right – the Marines will ALWAYS be here and thank God the same can not be said for Obama. Semper Fi…

Is the World Peace Council communist?

Check out this video of World Peace council protests against NATO, Lisbon, Portugal, November 20, 2010. Clue: the red flags are a bit of a hint. 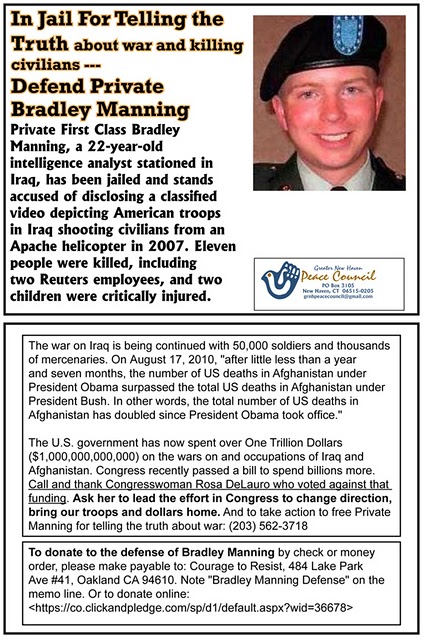 The man in the photo below, holding the “Defend Private Bradley Manning sign,” is Al Marder, a long time leader of the Greater New Haven Peace Council. 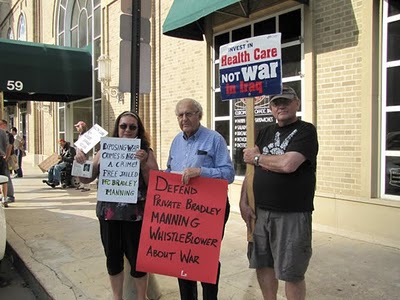 “also, everyone with half a brain knows that the term ‘libertarian socialist’ is both valid and not contradictory.”

Just as I thought. You have half a brain. Thanks for the confirmation.

We’ll be taking up a collection to buy you a shift key and a set of instructions for its use.

M: They are not contradictory. One deals with economics, the other with freedoms.

Look at Dictatorships for an example – they exist in countries with every economic model. Same with Democracies. Libertarianism is about personal freedom. It is NOT about the right to shit on thy neighbor. It is NOT about Corporate Freedoms, because Corporations, despite the SCOTUS ruling, ARE NOT people.

Let us understand what socialism actually is. Socialism is a system where resources are centrally managed and centrally redistributed according to arbitrary rules of “fairness” as adjudicated by a central authority. There is nothing voluntary about socialism.

The idea that there can be a principled libertarian who subscribes to the notion of involuntary redistribution of his production seems absurd to me on its face.

Socialism may seem like an economic system, but it’s more properly a system of enforced moralities with direct economic aspects. In order to subscribe to socialism, one must first subscribe to the idea that there is such a thing as enforcible fairness and that such fairness can be arbitrarily dictated.

The central authority decides who shall be taxed and to what degree, and who shall benefit from the distribution of those tax revenues. If a voting system (elections) is in place, the central authority may well be swayed in its distribution decisions by a desire to remain in power and thus tend to fund the “needs” of various strategic voting blocs. This template is, of course, corrupt. Likewise, the sitting central authority may favor a wealthy benefactor (say, a large corporation or some random billionaire) in order to secure campaign funding and related support. This template is also corrupt. If there is no voting/election system in place, then a defacto dictatorship — benevolent or not — exists and I’m pretty sure I don’t have to argue that this won’t fly with principled libertarians.

The “people-ness or not” of corporations is irrelevant to the oxymoron.

Freedom of choice is relevant. Socialism, through the mechanism of enforced morality, erodes freedom of choice and, eventually, eliminates it. The “common good” becomes the universal overriding principle and all else — especially individual aspirations — is subordinated to that cause. That this has economic consequences is only the most externally visible effect. The “economy” of socialism isn’t the mechanizing principle, central control and dictated fairness is.

Feed Me, Obama, Feed Me: The Plan for Food Dependency (Hat Tip: Brian B.)

Pelosi Fundraising to ‘Protect the Progress We Have Made’ (Hat Tip: Brian B.)

Krauthammer To GOP: Do Not Bail Out State Pensions (Hat Tip: Brian B.)

Paris on the Brink: Muslim Prayers Shut Down the City (Hat Tip: Brian B.)

Gold Is a Relic?

Morning Bell: Obama Will Make You Pay More at the Pump

The World Powers Up While America Powers Down

Nobel Prize Economist Mundell Says Forget All These Bullish Forecasts, 2011 Growth Is Going To Be Weak

S&P: Corporate Profit Margins To Be Squeezed In 2011

Understanding The Hegelian Dialect Is To Understand Our Slow Road Towards Tyranny (Hat Tip: Jean Stoner)

Out: Earmarking In: Lettermarking (Hat Tip: The Radio Patriot)

Big Nannies of the Year

And Now, Here’s The First 11 State Pension Funds That Will Run Out Of Money.

Outraged Yet? What if Fed Buys Munis? (I suspect that the MOAB will end only at the point of national bankruptcy and collapse of the U.S. Dollar.)

Oil Holds at $91 Per Barrel

US Changes How It Measures Long-Term Unemployment

I shouldn’t have to write this essay. But a judge in Oklahoma forced me into it.

Last month, 70% of the voters in Oklahoma approved State Question 755, which bans Sharia law (and international law) from being used in the state’s legal system. Almost immediately afterward, CAIR (the Council on American-Islamic Relations) sued to have the vote overturned, based on the bizarre claim that the measure is “unconstitutional.” U.S. District Judge Vicki Miles-LaGrange then sided with CAIR and issued an injunction preventing the measure from taking effect until all lawsuits against it are resolved. Since the suits will likely take years to play out, the new measure (and the will of the voters) will be stymied for the foreseeable future.

Those who oppose Sharia in the United States often argue their point by highlighting how misogynistic, backward, cruel and discriminatory Islamic law can be under most interpretations. And while all that may be true, it is the wrong argument to make. I get so frustrated watching pundits, politicians and bloggers making the weakest argument in what should be a slam-dunk debate that I’ve decided to write this brief outline of what I think should be the prioritized hierarchy of arguments against the use of Sharia in the United States.