According to English language German newspaper, The Local, leftist extremists are being urged to launch a 2011 campaign against Berlin’s tourism boom by attacking hotels and tourist buses, targeting visitors for petty theft and more violent actions. 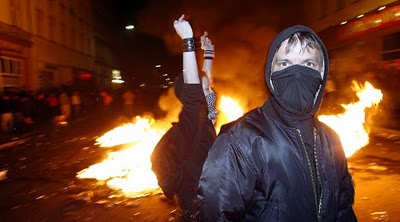 The latest edition of the leftist radical newspaper Interim contains a “proposal for an anti-tourism campaign 2011″:

The campaign would include “swiping wallets and phones from tables in restaurants, setting fire to cars, attacking hotels, creating rubbish piles, throwing things at tourist buses.”

The author of the statement in the paper argues that tourism is fueling “gentrification,” which is a growing complaint among the city’s left-wing radicals, who argue that rising affluence can push poorer people out of districts in which they have lived for years.

Dozens of cars have been set alight in the past year by suspected left-wing extremists.

“Gentrification seems to have achieved a great victory in the areas in which the battle for free space is happening,” the authors of the call for tourism attacks wrote in Interim.

Berlin’s tourism industry and the state Office of Criminal Investigation are taking the threats seriously..

The city-state’s domestic intelligence agency said attacks on foreign tourists were “not typical for the scene.”

The head of tourism body, ”Visit Berlin,” Burkhard Kieker, said the organization was not panicking but was watching carefully to see what resulted from the campaign.

Security experts said the newspaper Interim had a strong readership and influence among left-wing radicals in Berlin and the call for an anti-tourism campaign must therefore be taken seriously.

Intelligence officials in the western state of North Rhine-Westphalia regard the newspaper as “the defining mouthpiece of the militant scene.”

Authorities have on many occasions raided left-wing book stores and confiscated issues of Interim because they contained instructions on bomb-making.

It’s going to be a big year for European riot police.

Is Islam primarily a religious or a political movement?

Is Islam, per se, a threat to western culture and political ideals?

The Moslem Brotherhood from Geir Olsen on Vimeo.

Part of the reason California is almost broke.