Voice of the Copts
Al Arabiya 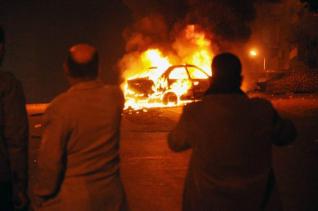 Egypt was on high alert on Monday ahead of the Coptic Christmas holiday following a New Year’s Day church bombing that killed 21 people in Alexandria as investigators raced to identify those behind the attack.

Police canceled leave for top officers and were tightening surveillance of airports and ports to prevent suspects from leaving the country, as new checkpoints were set up across the nation.

Security was also to be beefed up at churches for Christmas which Copts celebrate on Jan. 7.

Egyptian Interior Minister Habib al-Adli revealed important information about the identity of the suspects in the bombing that hit the Saints Church in Alexandria on New Year’s Eve.

“We identified some foreigners who entered Egypt before Christmas through the borders and with the help of Egyptians,” Adli was quoted as saying.

The paper reported that Egypt state security asked airports and harbors authorities to detect any suspects who arrived in Egypt during the past month. The search resulted in a list of 15 foreigners who entered Egypt in December 2010.

Meanwhile, the Traffic Department is currently preparing a report on 13 cars which were parked near the site of the explosion.

The prosecution interrogated a number of eye witnesses as well as several of the injured and got a description of the main suspect in the terrorist attack.

According to the description, the suspect had a fair complexion, his height was around 180 centimeters, and had his beard and mustache shaved. He was wearing eye glasses, a blue jacket and a light-colored shirt.

All eye witnesses agreed that there were two explosions: one at 12:15 pm and the other five minutes after.

One of the church’s security said that he noticed a Skoda car that had three people inside and which took a remarkably long time to park at the opposite side of the church even though the space was big enough for a bus.

He added that two of the people left while the one who was driving stayed in the car for a long time.

On the other hand, the Egyptian official al-Ahram newspaper reported that autopsy of the bodies revealed that the bomb was made of nails and other solid matters, which proves that the bomb was very primitive and local-made.

Forensic experts find it likely that the terrorists used large amounts of TNT explosives in addition to metal objects that come out at a great speed when the bomb explodes.

Celebrating the birth of Christ:

Coptic Christmas will fall on Friday — the weekly Muslim day of prayer and rest — and Coptic leader Pope Shenouda III said he intended to say mass as usual on Christmas Eve.

“Not praying would mean that terrorism has deprived us of celebrating the birth of Christ,” al-Ahram quoted him as saying.

The group demanded the release of two women, Camelia Shehata and Wafa Constantine, both priests’ wives, it said the church was holding against their will after they converted to Islam.

Egypt, the most populous Arab country, witnessed a resurgence in attacks by militants in the last decade after the government battled a spate of attacks in the 1990s that included an attempt abroad to kill the president.

President Hosni Mubarak has vowed to find those responsible for the bombing which he said targeted all Egyptians, regardless of their faith and blamed “foreign hands.”

The bombing has further underscored the vulnerability of the Copts, who make up about 10 percent of the country’s 80-million population and complain of discrimination.

Some Coptic activists have accused the government of not doing enough to prevent incitement against the minority, especially after Islamists began staging regular demonstrations demanding the release of Shehata.

Shehata, like Constantine in 2004, had escaped her husband last year and reportedly wanted a divorce, something that is very difficult to obtain from the Coptic church.

The church has denied that either of the women converted. Women’s rights activists say Coptic women have been known to convert, either to Islam or another Christian denomination, to escape unhappy marriages.

(Translated from Arabic by Sonia Farid).