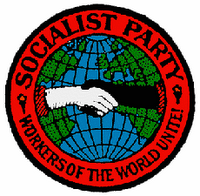 The Socialist Party USA has no doubt as to who is to blame for the recent murders in Arizona.

Though there is no reliable evidence about the politics of alleged killer Jared Lee Loughner, Socialists Andrea Pason and Billy Wharton lay responsibility at the door of Sarah Palin.

Check out the numerous lies and half truths in this statement…

The same cannot be said of the far right. Right-wing activists have consistently engaged in acts of assassination and in rhetoric that reinforces and encourages such acts. We can note the murder of abortion rights activists such as Dr. Barnett Slepian as well as the violent and hyper-masculine language consistently promoted by the right-wing media. Loughner was reported to be heavily influenced by these ideas, motivated by the call to arms being issued by the far-right.

And he did not have to look hard for motivation to attack Giffords. During the recent [November 2010] mid-term election, Sarah Palin’s Political Action Committee produced a chart that targeted Democrats. The chart employed crosshairs to identify the electoral opponents and utilized language like “We’ll aim for these races”, “This is just the first salvo” and “join me in the fight”. While Sarah Palin did not pull the trigger, she certainly holds a significant amount of guilt for creating the conditions in which such as act was possible.

Now is the time to reject such politics both here in the US and globally. A fitting tribute to the innocent victims from the Tucson shooting would be to end the US occupation of Iraq, Afghanistan and to end the bombings in Pakistan. The US military has, through targeted assassinations, extraordinary renditions and drone attacks, made political violence an everyday part of life in this region. As we learned in Tucson today, such violence creates real human tragedies. The lives of innocents lost in the Middle East to political violence are of equal value to Loughner’s victims.

As socialists, we aim to create a non-violent world. A world where the great wealth of society is used to satisfy human needs. Ours will be a democratic revolution where the great majority of working people are finally able to express their desire for things like jobs, peace and freedom. There is no place in this process, in the transition to a democratic socialist society, for political assassination. This is the political tool of the right and only serves to re-enforce the presence of the repressive apparatus of the government. We want freedom and believe that mass non-violent political protests are the means to acquire it. We invite you to join us in this struggle for a better world.

No side has a monopoly on political violence, but the left’s history of murder, assassination, torture and genocide out weigh’s that of the so-called right by many multiples of ten.

This mass murder is a tragedy, for all concerned. The left’s attempt to make political capital from the insane acts of a deranged gunman, with zero evidence, are deeply despicable.