On Sunday afternoon, January 9th, “Stand With Us,” the pro-Israel student advocacy organization, staged two counter-protests in New York City, as they faced off against hundreds of seething Hamas supporters and anti-Israel apologists assembled for vitriolic demonstrations in New York’s Herald Square and outside of the Israeli Consulate in midtown Manhattan.

Spearheaded by Al-Awda NY – The Palestine Right to Return Coalition along with a litany of similar far left radical offshoots such as the International Jewish Anti-Zionist Network, American Muslims for Palestine, Siege Busters Working Group, Existence is Resistance, ANSWER – NY and the International Socialist Organization, the demonstrators marked the two year anniversary of Operation Cast Lead which saw an Israeli incursion into Gaza; with the focus being the deterrence of Hamas sponsored rocket attacks against Israeli civilians. Calling for an “end to the occupation of Palestine” and railing against purported “IDF atrocities” against civilians in Gaza, the demonstrators held aloft signs declaring, “No US Aid to Zionist Racism and Murder!,” “Bring Zionist War Criminals to Justice!” and “Free Palestine.”

“In the last two years since the bloody massacre on Gaza, the Zionist aggression has grown exponentially, with the backing of US imperialist forces,” Ali Hussein, a spokesman for Al-Awda told the crowd. “The US continues to block international bodies from pursuing the findings of war crimes during the attacks laid out in the Goldstone Report and we are here today to tell the world that our battle against the Israeli occupation forces will never end until the illegal and morally repugnant Zionist entity is defeated,” he continued.

Chanting, “Free, Free Palestine” and “From the River to the Sea, Palestine Will be Free,” the demonstrators marched through midtown Manhattan to the Israeli Consulate where they continued their rally.

Countering the anti-Israel forces were close to 100 activists representing “Stand With Us.” On display at the counter demonstration were two rockets that were fired from Gaza into Israel’s southern towns since it’s withdrawal in 2005. Pointing to the rockets, Avi Posnick, the Stand With Us regional coordinator for the New York chapter said, “These rockets are among the 8000 fired into Israel by Hamas terrorists in Gaza and it is because of these rockets that Israel targeted the terrorist and weapons smuggling operations during Operation Cast Lead in December of 2008.”

Citing the fact that in 2010 another 235 Hamas sponsored rockets have fallen on innocent civilians in Sderot, Ashkelon and other Israeli towns, Posnick said that “Despite all this, Israel permits tons of food and supplies into Gaza through its crossings every day – calling into question the incessant and baseless accusations that there is a humanitarian or hunger crisis in Gaza. If we want to talk about peace in the Middle East, we must confront the agitprop emanating from the Hamas propaganda machine that is taking place across the street from here and declare to the world that it is Hamas terrorism and incitement that represents an impediment to peace, not Israel.”

The pro-Israel demonstrators held signs saying, “Israel: We Stand With You,” “Stop Palestianian Terrorism; Teach Peace” and “Israel Wants Peace, Hamas Supports Terror.” These signs are also part of the “Say Yes to Peace” campaign that Stand With Us launched to counter anti-Israel ads in Seattle and San Francisco. New York State Assemblyman David Weprin addressed the pro-Israel contingent by asking some simple questions. “What if rockets were fired at New York? What would the reaction of the United States be? Israel has the right to defend herself just as the United States does and we are here today to support the freedom-loving State of Israel in her continual battle for survival against those bent on wanton terror,” he said.

Chanting “Stop Hamas Now” and “Israel Wants Peace, Hamas Wants War,” the Stand With Us activists continued their vigil until early evening and vowed to return to square off against others planning similar anti-Israel protests. Said David Ruchlamer of Brooklyn, New York, who attended the counter protest, “The facts on the ground are quite clear for anyone who has eyes to see. The Palestinian Authority refuses to acknowledge Israel as a Jewish state, so real and enduring peace is just not attainable. Israel cannot be compelled to make any further territorial concessions with an enemy who is devoted to its complete destruction.” 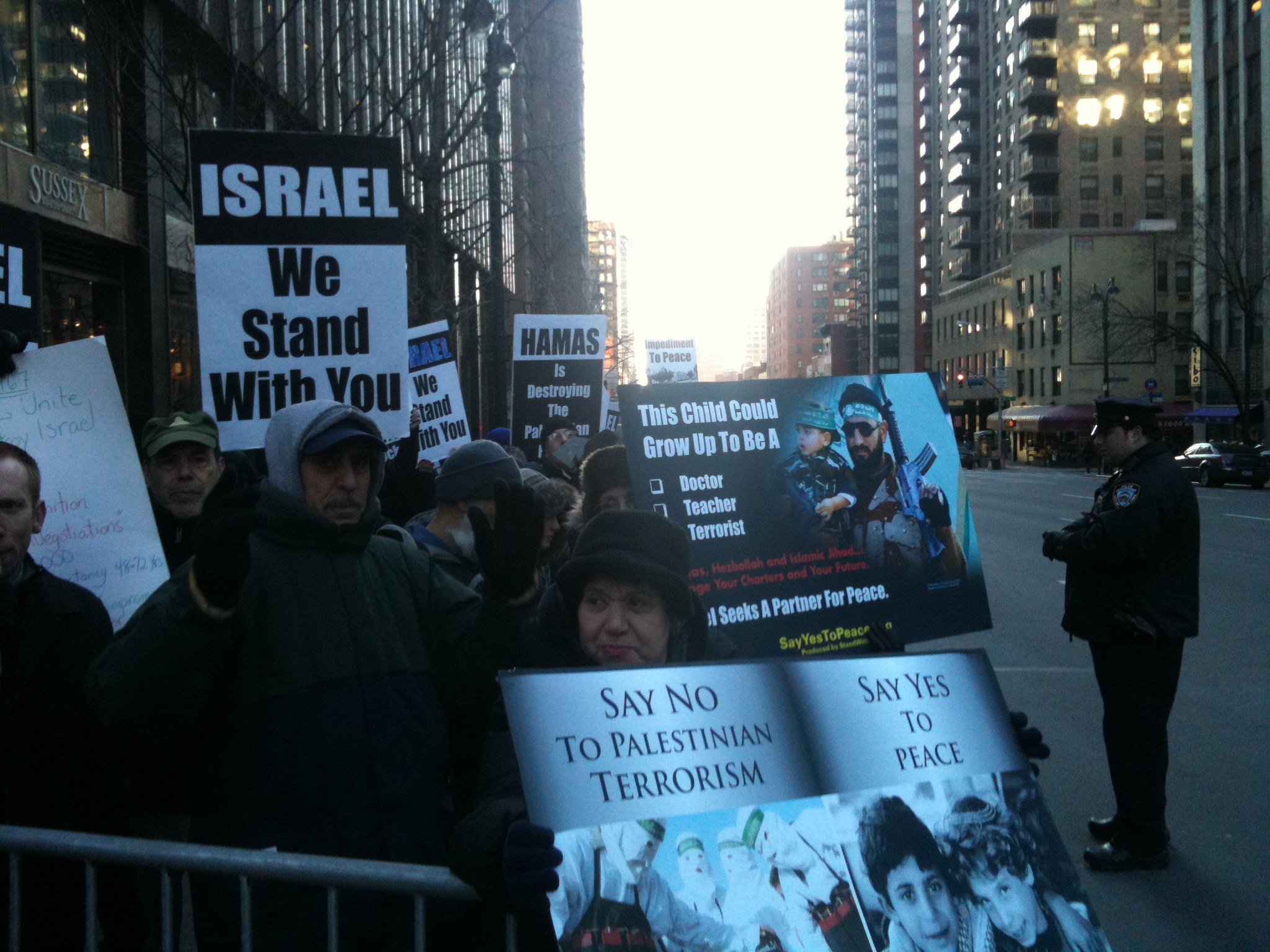 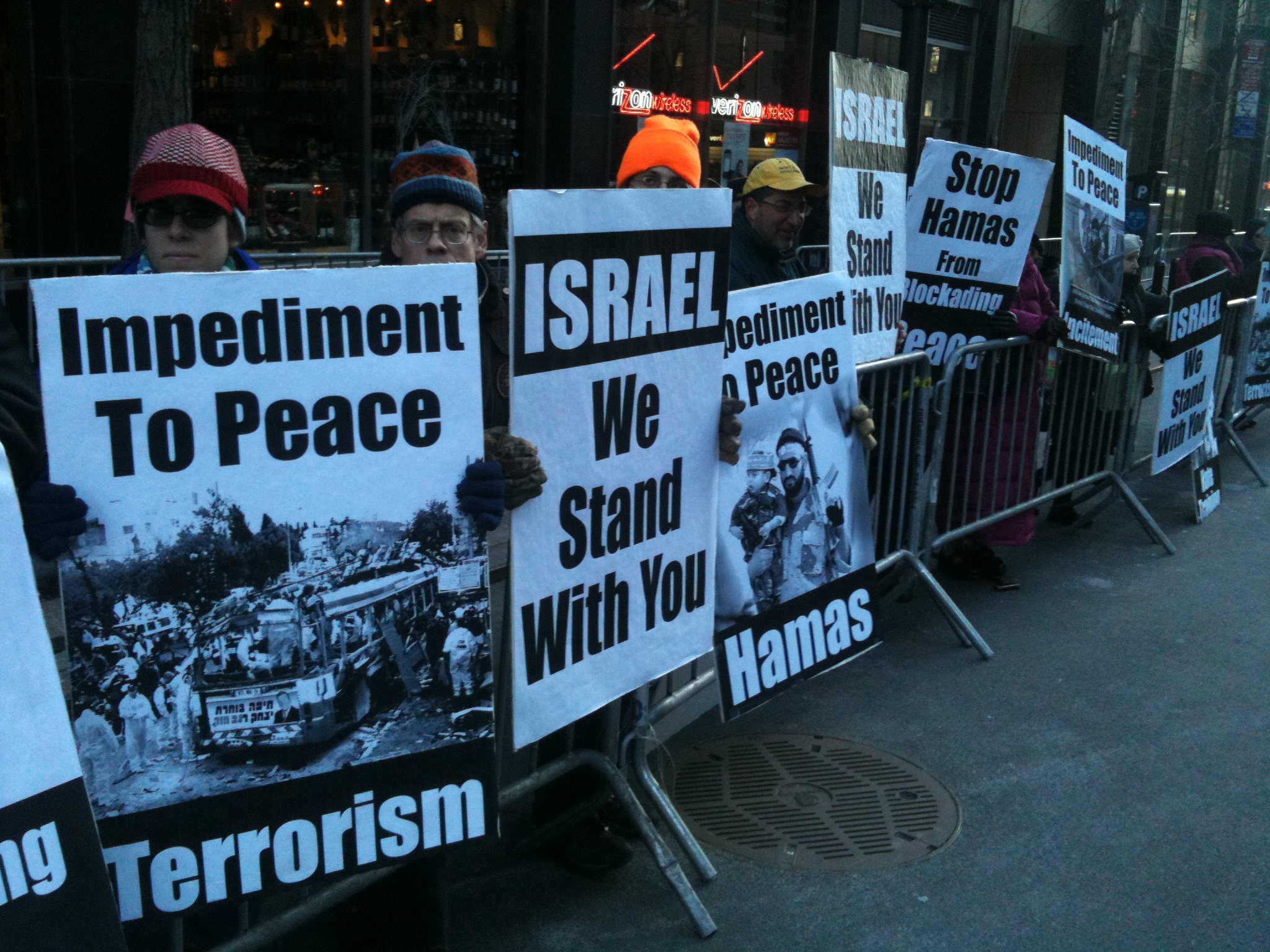