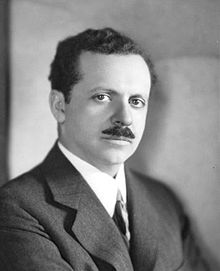 It’s the animal spirits baby… For over 100 years, Americans have been covertly manipulated by design in large part thanks to Edward Bernays, the modern father of propaganda. The Father of Spin viewed humans as little more than animals with instincts that they could not control, so Bernays set out to control them for the masses and to use them to his advantage and agenda, ruled by an elite minority of course. Society was ‘irrational’ and ‘dangerous’ due to their ‘herd instinct’ and as an elitist, Bernays used the art of public relations to utilize their instincts to better the collective. As Glenn Beck deftly put it, the last 100 years have been nothing more than one big lie manufactured by a propagandic genius – Bernays. The truth has no agenda, but Bernays certainly did.

He was born in Vienna and graduated form Columbia University. His uncle and mentor was the father of psychiatry, Sigmund Freud. Bernays worked as a journalist and as an ad man which brought him fame, riches and notoriety. Among his many successful PR campaigns were convincing Americans that breakfast was the most important meal of the day and included bacon. He also made smoking popular and sexy among women. He made it cool for politicians to hang out with celebrities and have casual photo ops. His elitist outlook on life was heavily shared and influenced by Walter Lippmann, one of the most prominent US political columnists at the time.

In addition to famous corporate clients, such as Procter & Gamble, the American Tobacco Company, Cartier Inc., Best Foods, CBS, the United Fruit Company, General Electric, Dodge Motors, the fluoridationists of the Public Health Service, Knox-Gelatin, and innumerable other big names, Bernays also worked on behalf of many non-profit institutions and organizations. These included, to name just a few, the Committee on Publicity Methods in Social Work (1926–1927), the Jewish Mental Health Society (1928), the Book Publishers Research Institute (1930–1931), the New York Infirmary for Women and Children (1933), the Committee for Consumer Legislation (1934), the Friends of Danish Freedom and Democracy (1940), the Citywide Citizens’ Committee on Harlem (1942), and the National Multiple Sclerosis Society (1954–1961). For the U.S. Government, he worked for the President’s Emergency Committee on Employment (1930–1932) and President Calvin Coolidge.

According to Bernays, there were four primary impulses that drove humans to do what they do: self-preservation, security, aggression and sex. This theory was also shared by Freud. You can see it today in our political arena. Healthcare, war, the Fairness Doctrine, terrorism, food shortages – all of it can be connected to these four things. Tell a lie often enough and people will believe it. Wrap it in glamorous, beautiful propaganda and they’ll kill to be a part of the lie.

In his renowned book Propaganda (1928), Bernays argued that the manipulation of public opinion was a necessary part of democracy:

The conscious and intelligent manipulation of the organized habits and opinions of the masses is an important element in democratic society. Those who manipulate this unseen mechanism of society constitute an invisible government which is the true ruling power of our country. …We are governed, our minds are molded, our tastes formed, our ideas suggested, largely by men we have never heard of. This is a logical result of the way in which our democratic society is organized. Vast numbers of human beings must cooperate in this manner if they are to live together as a smoothly functioning society. …In almost every act of our daily lives, whether in the sphere of politics or business, in our social conduct or our ethical thinking, we are dominated by the relatively small number of persons…who understand the mental processes and social patterns of the masses. It is they who pull the wires which control the public mind.

Remember, Bernays’ work was highly valued by Goebbels and the Nazis. They used propaganda to consolidate and extend their power base.

Bernays’s own daughter said that her father was enthralled with the art of manipulation. She said he believed in “enlightened despotism” and that people needed to be guided due to their innate irrationality. They were a bewildered herd that needed a shepherd. His daughter also said that her father developed a view of people as “stupid,” an opinion which is shared by elitist leaders today.

Enter Cass Sunstein, our Bernays of the 21st century. Sunstein is our regulatory czar and you will see much more of him here on NoisyRoom in the coming weeks. We are in the beginning stages of research into all things Sunstein for KeyWiki and there is no shortage of information on him. He virtually controls almost everything in America – you can see his fingerprints everywhere these days from food, to animal rights, to the EPA, to land confiscation… He is ‘nudging’ us into a tyrannical existence under a gigantic, power wielding government. He is certainly the most dangerous and powerful man in American politics today. A more fitting title for him would be Master of Propaganda, which he utilizes at every turn. Not for individuals who pay him; no for a greater cause… The Progressive cause of a Marxist government that is a flavor of national socialism and that knows what is best for Americans. What Bernays was to the last 100 years, Sunstein will be to the next 100. Perhaps much more, as he holds the ultimate power of regulation and control in the US which can in fact, simply bypass our Constitutional safeguards. Sunstein’s plan is to literally manipulate Americans into begging for his benevolence. The liberty clock is ticking and Sunstein is using our freedom’s against us.

The engineering of consent is the very essence of the democratic process, the freedom to persuade and suggest. – Edward L. Bernays, “The Engineering of Consent”, 1947

15 thoughts on “The Herding of America – Enlightened Despotism”