What a brazen liar… 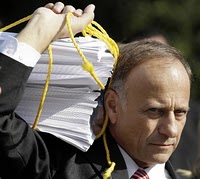 Rep. Steve King (R-Iowa) has spent every day for nine months fighting for the full repeal of ObamaCare. Although he has at times been ridiculed, ignored and doubted, King campaigned tirelessly to repeal the Democrats’ health care law.

On Tuesday, the House will start the debate and vote to repeal ObamaCare as its first major legislative action since the Republicans took control. ObamaCare repeal is expected to pass the House on Thursday and Steve King will have been proven right all along.