By: Terresa Monroe-Hamilton
Special thanks for contributions from Jean Stoner, Nancy Jacques and Brian B. 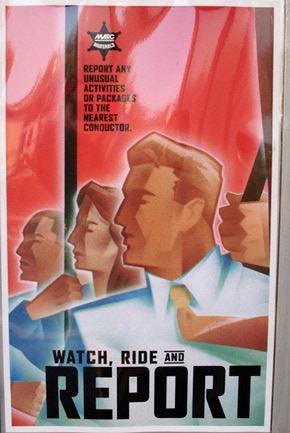 In a post-9/11 America, we have all learned to be vigilant. To keep our eyes open and watch what is going on around us. I personally don’t know anyone who has not had this ingrained into his psyche over the last 9 1/2 years.

But there is a HUGE difference between being vigilant and being an informant on your family, friends or neighbors. The road to tyranny beckons Americans as our ever-more Marxist leaders steer us to a form of government that will be all-controlling and all-seeing. America bears little resemblance now to the country I knew, loved and grew up in. There is an ever-present feeling of anxiety, fear, foreboding and depression hanging over the citizens of what was once the freest nation on the planet.

Our present day police state started out with Americans just wanting to feel safe again. We embraced the Patriot Act because we thought it would protect us from terrorists. Unfortunately, we didn’t learn until recently that the Patriot Act was actually penned long before 9/11, during the Clinton Administration. Many warned that it could be turned against Americans and this turned out to be true. Since Obama was elected, regulations concerning American citizens and their supposed ‘safety’ have exploded in number and what Obama can’t get through Congress, he just writes an Executive Order to accomplish his desired result. And believe me, Cass Sunstein is there advising him all the way, nudging us into a regulatory hell that will squish our freedoms into non-existence.

From the TSA, to cameras placed in major cities and security towers placed strategically in front of stores or meeting places; from National IDs to security points in malls and railway stations, we are being stripped of our liberties one by one. And let’s not forget the IRS who is now encouraging people with cash rewards for turning on people they know and turning them in. Big Sis wants you to report anything suspicious and stores like Walmart are lining up to help her with government propaganda spread over monitors at checkouts. The list is getting longer and scarier by the day. We are one terrorist act from martial law, whether it occurs in actuality or is authored by our new overlords.

DHS is evidently now skirting that pesky 10th amendment by setting up state centers where individuals can report anything they find strange or worrisome. The state of Oklahoma is a great example. And while they are it, they can map their neighborhoods for an emergency or more likely to make it easier for Big Brother when he comes knocking on your door. Most of these centers are already in place, many with grants awarded during Bush’s presidency. But now, with free flowing government money, look for this to kick into high gear. It’s for the good of the collective, don’t you know…

From one of the pages on the Oklahoma Site:

Wrap your head around that one for a moment. But relax, you are probably only ‘suspicious’ if you don’t agree with the government. Wait…

The NSA is opening a data center in Utah. It’s not hard to figure out that this has to do with cyber security and cyber warfare. It brings more jobs to Utah, but alas… Once you let the demon in the door Utah, he will have his due.

Our Republic is under attack by our own government. If Americans do not wake up soon and see the progressives and Marxists among us, we will no longer be a free nation. China is waiting in the wings, rubbing their hands and licking their chops in glorious anticipation of America as a prize for the taking. So I’m taking DHS’ advice to heart folks – just seein’, just sayin’. But mine will be to America at large, not our self-ordained rulers.

And now, a sample of DHS’s new ‘See Something, Say Something’ campaign:

DHS Video No Reservations – Extension of “See Something, Say Something” program. This video equates people who use cash or have a distrust of credit cards as suspicious and potential terrorists.

DHS Video Bag check– Extension of “See Something, Say Something” program. This video shows that anyone attending public events will be under the scrutiny of DHS.