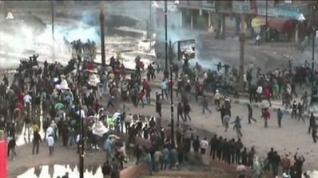 Did the dictator escape from Egypt?

Contradictory information reaching our office in the U.S. indicates that hundreds of thousands of people in the streets of all Egyptian cities protesting against the Egyptian regime are demanding that the dictator Mubarak and those who stand with him step down and resign from power.

The Egyptian army is in the streets helping the regime police who can no longer handle the crisis.

Some sources indicate that a certain percentage of regime police and military army joined in along with protestors.

The Egyptian regime imposed a lockdown of all citizens from 6 pm until 7 am tomorrow morning.

Sources indicate that the Egyptian Defense Secretary is actually in the United States at this moment, and this could be an indicator of the fall of the Mubarak regime.

Voice of the Copts will continue to inform you with further updates.