Those Westerners who believe that the ongoing turmoil in Egypt and Tunisia may lead to a flowering of “democracy” in the Arab world are in for bitter disappointment.

For years European and American Trotskyists and communists have been working with Egyptian leftists and the Muslim Brotherhood to oust pro-US dictator Hosni Mubarak. 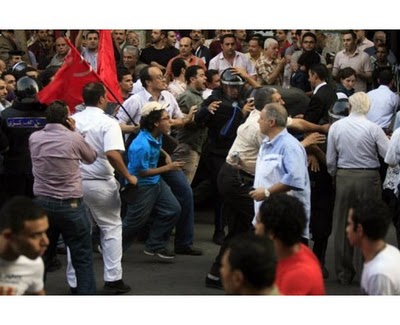 If the Egyptian revolution succeeds, Egypt will turn both further to the left and to radical Islam. This will have huge implications for the security of Israel, regional stability (if you can even use such a word in the Middle East) and the security of the Suez Canal and Western oil supply and trade lines.

Already, Trotskyists and communist forces around the world are rallying in support of the Egyptian revolution.

From an article by Egyptian socialist Wassim Wagdy in Britain’s Socialist Worker Online:

They said they would be there, and they were. The 25 January was declared a “Day of Anger” by democratic and socialist forces a week beforehand…

For years the resistance to Mubarak’s regime has been on the rise: a democratic movement feeding from the solidarity with the Palestinian Intifada, the protests against the occupation of Iraq, against the attack on Gaza, protests against fraudulent presidential and parliamentary elections; the second part of the 2000s saw a massive wave of strikes that demanded, and often won, economic demands and always called for the ousting of Mubarak. Step by step, workers and the political opposition have been increasing in confidence…

Demonstrators in their thousands gathered and marched in all major cities with one goal: ousting Mubarak’s regime. Their slogans included: “Revolution until Victory”, “Revolution in Tunis, Revolution in Egypt”, “Oh Mubarak, Bin Ali is waiting for you in Jeddah.”

The prospect of radical change in the region has never been so close. It might not happen today, but this is definitely the beginning of the end…

In London, demonstrations are being held every day in front of the Egyptian embassy demanding regime change and supporting the protestors in Egypt. Echoing the slogans from the streets of Egypt the protestors outside the Egyptian embassy in London have been chanting: “The people want to bring the regime down”, “Bread, Freedom and Social Justice.” Last night, in front of the embassy, and to the tune of the national anthem, protestors chanted “My homeland, my homeland, You need a revolution, Oh my homeland.”

Egypt will not be the end of this. Look for increased violence and unrest not just trough the Arab world, but also in Greece, Spain and in France.