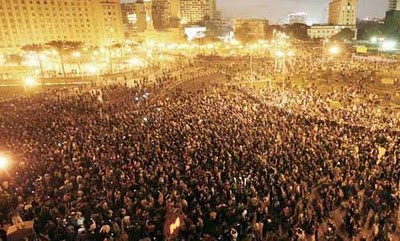 A general strike, to continue until Mubarak’s government falls, has been called by the newly formed Federation of Egyptian Trade Unions.

The AFL-CIO, America’s main labor federation, along with nearly all the rest of the world’s trade union movement, has thrown its weight behind Egypt’s pro-democracy demonstrators.

More specifically, world labor is in solidarity with the Federation of Egyptian Trade Unions and its call for the nationwide general strike, aimed at bringing down nearly three decades of Mubarak’s dictatorship.

“The people’s movement for democracy in Egypt and the role unions are playing for freedom and worker rights inspires us and will not be forgotten,” Richard Trumka, president of the AFL-CIO, said in a letter to the Egyptian organizers.

Trumka’s letter was to Kamal Abbas, the general coordinator of the Center for Trade Union and Workers Services, and Abu Eita, leader of the Real Estate Tax Authority Workers. Both organizations have been instrumental in pulling together the FETU, which Trumka welcomed into the international labor movement.

FETU’s first act was to plan the nationwide general strike.

A Jan. 30 press release announcing the formation of the FETU – an alternative to the government-run Egyptian Federation of Trade Unions… stated that “the labor movement is in the heart and soul of the Egyptian Peoples’ revolution and its emphasis on the support for the six requirements as demanded by the Egyptian People’s Revolution.”

The same day, organizers held a press conference in Tahrir Square, announcing the FETU and the “formation of committees in all factories and enterprises to protect, defend them and to set the date for the general strike.”

According to Sharan Burrow, general secretary of the International Trade Union Confederation, “This is a hugely important step for all Egyptians, who have for so long been denied the right to democratic representation at work.”

“Independent unions, which the regime refused to recognize, have organized thousands of local strikes, sit-ins and protests in recent years, and have been a moving force behind the massive mobilization of Egypt’s people that we have been witnessing in recent days,” she continued.

The AFL-CIO is a member of the ITUC, which represents 176 million workers in 151 nations.

The World Federation of Trade Unions, which represents millions of workers in dozens of countries, also sided with Egypt’s workers.

“The working class of Egypt is leading this struggle and we wish them success in their targets,” read a WFTU press release. “We demand from the government of Egypt to immediately stop the murders and arrests of demonstrators.”

The general strike will continue, organizers say, until Mubarak goes and the people’s demands are met.

While many commentators are understandably focusing on the role of the Muslim Brotherhood in the Egyptian turmoil, there is no doubt that the international left is a playing a leading and perhaps decisive role in this disaster in the making.

Cliff Kincaid of America’s Survival has released a “must read” report on the ties between radical Islam and Marxism-Leninism.

As the leader of Tunisia was forced into exile, the Popular Front for the Liberation of Palestine (PFLP), a Marxist–Leninist organization founded in 1967, issued a statement declaring, ― These popular upsurges are shaking the ground in the Arab world and posing a new and powerful challenge to U.S. imperialism, Zionism, and the Arab regimes which have enabled them by trampling upon their own people for decades. It said that ― the Arab masses were capable of making great and revolutionary change, as we are witnessing today, and which has already achieved great results in Tunisia.

Kincaid urges that Congress investigate U.S. based support for the Muslim Brotherhood and Revolutionary Socialists.

The U.S. government MUST URGENTLY restore Congressional subversive investigation bodies to expose extensive internal support for foreign terrorist regimes and their networks within the United States.

Pro-Mubarak Marauders Use Horses, Camels, and ‘Chariots’ to Beat Protesters

The P/Oed Patriot: Union Boss Calls for Violence?: “We Have an Agenda Worth Fighting For… Even If We Have to Take to the Streets and Do What Needs to Be Done.” (Hat Tip: Brian B.)

Former Director of the CIA’s Counter-Terrorism Center: American Policy in the Middle East is Failing Because the U.S. Doesn’t Believe in Democracy (Hat Tip: Brian B.)

A Conservative Teacher: Obama is Picking Worst of Bad Options in Egypt: Is Obama Getting Advice from Jimmy Carter? (Hat Tip: Brian B.)

Remember what President Obama’s speech in Cairo was called? Yep, “A New Beginning”. Can we go back to the old beginning now? (Hat Tip: Larwyn)

Will President Obama Abide by Court’s Decision and Suspend Obamacare?

I’m Just a Bill, Yes, I’m Only a Bill: The Constitutional Way to Make Laws

Tunisia: In Search of Economic Freedom

Turmoil in the Middle East, Confusion in the White House

Why does link for Mexican newspaper redirect to the FBI’s website? (Hat Tip: Jean Stoner)

‘Camp David made us a slave,’ Egyptian protester says

IN COME THE CAMELS!

Oil firm after spiking above $102

Gibbs: Some Things ‘Have To Be Done Away From TV Cameras’

AL GORE: THE SNOWSTORMS ARE CAUSED BY THE ‘WARMING’

How Long Can The Party In Stocks Really Last?

Did A Liberal US Women’s Anti-War Group Join The Protesters In Cairo?

Everyone’s Fears Are Coming True, As Pro And Anti-Mubarak Forces Are Now Fighting

Get Ready, Yemen’s About To Have Its Own “Day Of Rage” Tomorrow

The White House Is Furious At Mubarak, And Is Demanding The Transition Begin Right Now

Here’s The Real Cost Of Food Inflation In America

Oh, those cwazy uniforms; or, no wonder Valerie Jarrett was confused.

Disgusting!… Michael Scheuer Says: “Israel is Going to Cost Us Blood & Lives As Long As We Pursue Relationship With Israelis” (Video)

Nothing Is Stable Anymore

A ‘New’ Light Bulb Even Glenn Beck Could Like?

The Terrorists Who Got Away: FBI Hunts 9/11 Suspects Still At Large

Forecaster predicts the next crisis

Egypt and the growing problem of global inflation.

The Road to Madness Is Paved With $100 Bills

Are Gold and Silver Still a Buy? Absolutely — Here’s Why