If It Ain’t Broke, Fix It! from RightChange on Vimeo.

Note the “Che” T-Shirt and red flags in Tunisia.

Call to Egyptian workers. Statement from the Revolutionary Socialists, Egypt:

What is happening today is the largest popular revolution in the history of our country… and of the entire Arab world. The sacrifice of our martyrs has built our revolution and we have broken through all the barriers of fear. We will not back down until the criminal ‘leaders’ and their criminal system is destroyed.

The demonstrations and protests have played a key role in igniting and continuing our revolution. Now we need the workers. They can seal the fate of the regime. Not only by participating in the demonstrations, but by organizing a general strike in all the vital industries and large corporations…

The regime can afford to wait out the sit-ins and demonstrations for days and weeks, but it cannot last beyond a few hours if workers use strikes as a weapon. Strike on the railways, on public transport, the airports and large industrial companies…! Egyptian Workers! On behalf of the rebellious youth, and on behalf of the blood of our martyrs, join the ranks of the revolution, use your power and victory will be ours!

What we need right now is to push for the socio-economic demands as part of our demands, so that the person sitting in his home knows that we fighting for their rights… We need to organize ourselves into popular committees which elects its higher councils democratically, and from below. These councils must form a higher council which includes delegates of all the tendencies. We must elect a higher council of people who represent us, and in whom we trust. We call for the formation of popular councils in Middan Tahrir, and in all the cities of Egypt.

The Russians had a name for “workers councils.” They called them “Soviets.”

The revolution in Egypt is not primarily Islamic – it is socialist/communist with a Muslim cover.

Below is a video of Communist Party of Australia leader Warren Smith speaking in Sydney.

Egypt has the potential to change the world…to shift the balance of forces in the Middle East…A progressive change in Egypt can provide the spark for change in Palestine.

Current events in Egypt and across the Arab world, demonstrate the potential to build and strengthen anti-imperialist fronts across the globe…These events challenge the domination of the U.S. dictatorship of capital…they challenge its economic, political and cultural domination…

Next are extracts from a C.P.A. statement on the revolution. The rhetoric is both accurate and significant.

The Communist Party of Australia stands in solidarity with this heroic struggle in Egypt’s political and economic life to achieve democracy, jobs and bread.

We are witnessing a national democratic revolution, a determined attempt to overthrow a corrupt reactionary, pro-imperialist regime.

It was organized initially by young Facebook and Twitter activists inspired by the success of Tunisians in overthrowing Ben Ali. They came from the Kifaya (Enough) movement – a coalition of government opponents – and the April 6 Youth Movement. Formed three years ago, this takes its name from a April 6, 2008 general strike that itself stemmed from a year-long strike by textile workers in Ghazi el-Mahalla. Key issues in the general strike were the soaring cost of bread and other basic necessities, and demands for increased wages.

The popular mobilization we are witnessing on the streets of Egypt also has its roots in the courage and persistence of the organizations representing the workers and other progressive forces – among them the Communist Party of Egypt – who have worked for many years under very difficult conditions to rebuild the workers’ movement, weakened by successive cycles of repression and political persecution.

The Communist Party of Egypt has experienced decades of repression. Its members have suffered imprisonment and death at the hands of this regime. They have shown great courage and have succeeded in mobilizing tens of thousands of workers in recent years in waves of strikes that have contributed to weakening the regime.

Egypt occupies a highly strategic position, straddling Africa and Asia, and it controls the Suez Canal, the vital shipping link for oil and other products moving between Asia and Europe and beyond.

The US and its European and Israeli allies will fight to prevent the Egyptian people from controlling their nation’s military and energy policies, and what passes through the Suez Canal. The threat of military intervention hangs over the nation. Imperialism has invaded Egypt once before to maintain control of the Suez Canal.

The ultra-conservative Fox TV raised the spectre of Islamic fundamentalism, reporting: “If Mubarak falls, the United States and its other principal ally in the Middle East, Israel, could have to face a government of the Muslim Brothers in Cairo, and a turn towards anti-western sentiment in the North African country.” But this is not an Islamic-led movement.

US imperialism and its allies are desperately concerned that the Egyptian national democratic and anti-imperialist revolution will succeed and spread to other parts of the Arab world, threatening other client regimes and undermining US-Israeli hegemony in the region.

What is happening in Egypt is already affecting Jordan, Yemen, Algeria, Morocco as well as other states. The balance of forces, the political map is changing in a process which may be diverted or delayed but cannot be stopped…

A new Egyptian government could break the blockade of Gaza.

Regardless of the immediate outcome, the mass uprising in Egypt marks a turning point not only for Egypt, but for the Middle East and surrounding countries, and for US foreign policy. Imperialism and the reactionary, Zionist state of Israel have a lot to lose.

This is not primarily an Islamic revolution, though Islamic forces and sentiments will be exploited in its completion.

This is a communist led insurrection designed to wrest one of the most strategic countries in the world from the pro-Western camp.

If this revolution succeeds, as looks likely, Egypt will become, once again a client state of Russia and an ally of China, Iran, Cuba, Syria and the rest of the fast expanding “Evil Axis.”

This revolution is not about “democracy,” it is about a decisive shift in the world balance of power away from the West, in favor of the East.

It is the most significant geopolitical event so far this century.

The communists understand that – why don’t we?

Yesterday’s birthday reminded me of a very special present I was given while I was in California late last year.

My hosts gave me a family heirloom – a summons, for seven pounds and ten shillings, dated July 26, 1746, signed by ancestor Jonathan Trumble of Lebanon, Connecticut. 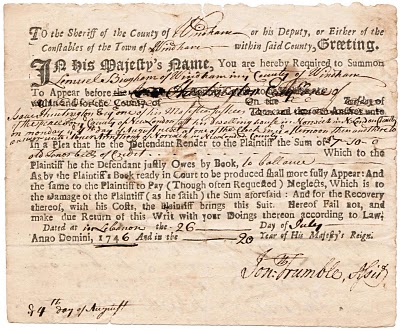 Jonathan Trumbull was a close friend of George Washington’s and managed a good bit of the Continental Army’s logistics and supply. Washington referred to him as “Brother Jonathan.”

This document is now my family heirloom. It will be passed to my children as a symbol of the generosity and the love of freedom of the American people and the leadership they have given the free world. 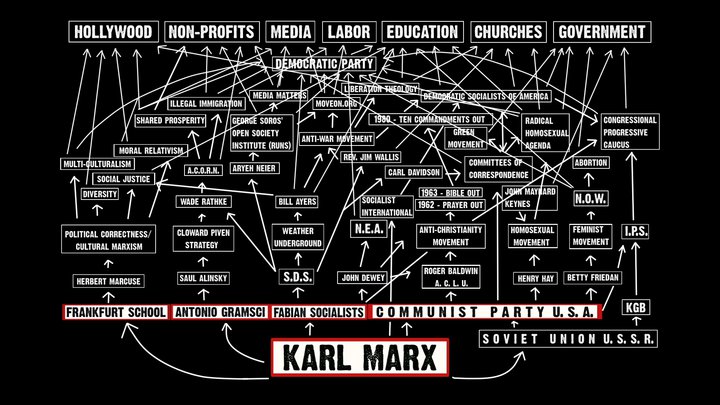 Curtis Bowers has made an excellent documentary: “AGENDA: Grinding America Down.”

Mr. Bowers looks at the subversion of America, the systematic “grinding down” of American culture and values over several decades – a process nearing its climax today.

US citizens: To order copies of Curtis Bowers’ DVD, go to his website here.

I can’t recommend this documentary enough. Support Curtis’s work and be informed. Buy your copy today.

Note from NoisyRoom: Simply one of the best documentaries we have ever seen. We bought a copy and we are handing it around. Your family, friends and children need to see this.

We have added a graphic on the right and a link where you can purchase the video. We make no money off this – we just feel it is important to the survival of America that this is in every home it can be. Curtis Bowers is an incredible patriot.