What man hasn’t suffered for lack of one of these?

While the character of the Egyptian revolution remains ambiguous, the nature of the Tunisian revolt is more clearly communist in nature. 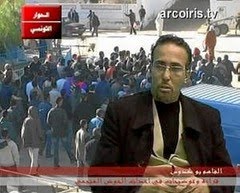 Fahem Boukadous is a journalist who was in prison when the Tunisian demonstrators forced president Ben Ali to flee the country. A member of the Workers Communist Party of Tunisia, “he does all he can every day so that the great opportunity opened by the revolution will not be lost.”

Because of that, Fahem Boukadous is content. He is a happy man. Released on January 19, five days after the flight of the dictator, he hit the streets in a Tunisia turned upside down by the revolution. He was in prison for six months, and it was not the first time he suffered the rigors of the dictatorship. In 1999, after going through the torture chambers of the ministry of interior, was sentenced to three years in prison, of which he served 19 months before receiving a presidential pardon.

An exceptional witness of the 2008 revolts in the mining area of Gafsa, in the Redeyef region, he was again imprisoned in 2010 for his role in promoting an activist journalism that unveiled those protests, which are considered the dress rehearsal for the ongoing revolution in Tunisia.

Here are some excerpts of a recent interview given by comrade Boukadous to John Catalinotto of the U.S. Workers World Party.

What is the relationship between the revolts of 2008 and the revolution of 2011?

On the one hand, there is the lesson of resistance that the Redeyef residents and the entire mining area contributed, which accumulates in the collective memory of the country. The second point is the participation in the 2008 movement of unemployed university graduates, one of the forces today [leading] the revolutionary process. The third is the importance of “popular media”. Al-Hiwar TV and home CDs have been replaced by Facebook, through which the jaw of censorship was broken.

Did it have anything to do with US?

I do not think there was any US intervention to facilitate the fall of the dictator. The revolution has caught the great powers off balance. Yes, of course, now they maneuver for “stability”, but they are sure they cannot stop the process of change.

Is it finished, the Ben Ali regime?

The regime is still there, not only within the police and the state apparatus, but also in the media and the internet. We must seize the moment to create new media and new formats. We must also establish a coalition between Tunisian and foreign journalists because we need experience and training.

What happened in Tunisia has had great international repercussions.

Tunisia has unexpectedly put in motion an avalanche that is not only one of “emulation”, it is a true “revolutionary rivalry” or “positive competition” that is now shaking Egypt, the epicentre of the Arab world. What happens there will impact on this country again.

The revolution rose from the centre and south og the country and there it returns and there it continues… The revolution is not the capital. The Qasbah is just one of many expressions of protest, a symbol, no doubt because it attracts the attention of the media, but the revolution began in the provinces and there it is still very active. The other day, 80,000 people demonstrated in Sfax and then the city has been paralysed by a general strike. In Gafsa, Sidi Bouzid, in Tala … there are rallies and protests.

How do you evaluate the relationship of the Tunisian left with the European left?

During the Bourguiba years, relations between the Tunisian and European left were very strong. Then, under the harsh repression of Ben Ali, solidarity contacts have been more on an individual basis, but they have helped us greatly to resist. The Workers Communist Party of Tunisia (PCOT) maintains contact with some forces of the Marxist left in France, in the Spanish state in particular with the Spanish Communist Party (Marxist-Leninist) of Raul Marco. The demonstrations these days in different European capitals have been very important, not only moral support but as pressure on EU governments, which have been so complicit with the dictator.

What is the unfinished business of the Tunisian left?

By its very nature, the left is international. There is no singularly Tunisian left. And we all must pull together, overcoming sectarianism, to reclaim this minimum common denominator: not only the struggle against the local dictatorship, but against imperialism.

Some pictures have shown Tunisian demonstrators with flags and symbols of the left, something that has proved shocking to many people in Europe.

In Tunisia there are thousands of leftist activists. During the hardest years of repression, our forces were scattered and hid. But today they are returning. The problem is we have no trained leaders to give direction to the new militancy.

Information management is showing itself to be crucial these days, both in Tunisia and Egypt. What should we do to prevent the corporate media that serves the Empire from taking the upper hand?

It is essential to build an international coalition of left-wing journalists and to organise internationally to produce new formats and new media capable of combating prejudices of the self-serving mainstream media.

The Tunisian revolution is clearly secular in nature. Islam is playing little, if any, of a role.

In my view, the Egyptian revolution is following a similar course. Islam will play more of a role in Egypt because the Muslim Brotherhood is far stronger there. However, though Islam will be used by the revolutionaries to win over the masses, I believe the Marxist revolutionaries will be the real power behind the throne.

American in Cairo: Mubarak Just Pissed Off a Whole Bunch of People

Message From Tahrir Square: “He’s Not Gone, Tomorrow’s Going to Be Nasty”

Medea Benjamin, leader of the left-wing, pro-Islamist-terrorist group Code Pink said in an interview Wednesday the group had previously worked with organizers of the campaign to overthrow the Egyptian government when Code Pink agitated in Cairo the year before. Code Pink worked on behalf of the terrorist group Hamas against the government’s blockade of Hamas-controlled Gaza. At the time, Code Pink said their safety in Gaza was guaranteed by Hamas. 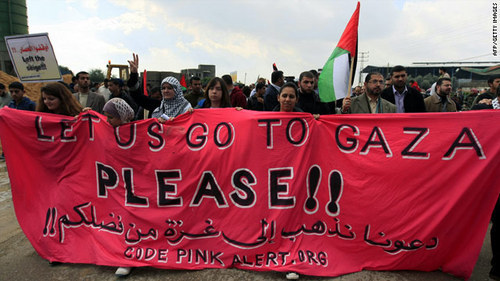 Code Pink has acted as a go-between from Hamas to President Barack Obama. In 2009, Hamas gave Code Pink a letter for Obama. Code Pink co-founder Jodie Evans, who is also a top fundraiser for Obama, visited the White House and met with a senior aide to Obama confidante Valerie Jarrett after one of the group’s trips to Hamas-controlled Gaza in 2009.

Speaking to Laura Flanders on GritTV, Code Pink co-founder Medea Benjamin made the startling revelation about previously working with the protest organizers to help Hamas when asked a question about outside influence on the protests.

Benjamin had just returned from a week in Cairo where she and her Code Pink lackey Tighe Barry had originally planned to lead Code Pink’s ninth trip to Hamas-controlled Gaza via Egypt in the past two years. That trip was cancelled by the Egyptian government in the wake of the protests.

As we previously reported, when Benjamin arrived in Cairo last weekend, she was brought to the nerve center of the protests (the Egyptian Center for Economic and Social Justice) and met with protest leaders.

Code Pink claims to have raised more than $10,000 to aide those in Egypt working to overthrow the Egyptian government.

Laura Flanders: “We want to debunk the myth that this was the all work of the brotherhood of Islam or the Islamic brotherhood or the work of Code Pink.”

“But there is something in that space between a conspiracy of outsiders and a completely spontaneous eruption. There are groups on the ground–we’ve heard about the role of big labor movement. You found people on the ground who you recognized, who you knew from other work.”

Medea Benjamin: “We have been going to Egypt to get into Gaza several times. And on one occasion a little over a year ago we had 1300 people who were trying to go to Gaza with us called the Gaza Freedom March. And we were joined by many Egyptians who then lo and behold were among the people who were the organizers of this. Groups like the April 6 Movement, people who are part of the journalist groups, the lawyers groups, the, some of the, a group called Kifaya, which means ‘enough.’

So we had interacted with many of these people before. And in fact it was in that square (Tahrir Square) that we had been beaten up by the police just over a year ago. And I had a feeling Laura going back and forth to Egypt that this was going to explode…

Benjamin neglects to mention that among those who traveled to Cairo with Code Pink a year ago were former Weather Underground terrorists Bill Ayers and his wife Bernardine Dohrn, both of whom waged a Marxist terror war against the United States forty years ago. The Muslim Brotherhood coincidentally borrowed a Weather Underground tactic and name for their violent protests, the “Day of Rage.” On that day of rage police stations were ransacked and Muslim Brotherhood (as well as Hamas and al Qaeda) prisoners were reportedly freed from Egyptian prisons by rioting mobs.

“…I have faith in so many of the secular people who just came to (Tahrir) Square and said, “I’m not leaving here,” and for the first time made relationships with the Muslim Brotherhood people…”

Flanders raised an interesting point that critics of Glenn Beck have failed to raise–that the protests didn’t develop in a vacuum, that years of interaction by Egyptians with leftist outsiders experienced in fomenting revolutions and otherwise undermining governments helped lay the groundwork for the campaign to overthrow the Mubarak government.

Benjamin was kind enough to admit to the world that that indeed was the case–and that the groups involved were also involved in aiding the terrorist group Hamas by publicly challenging the blockade of Hamas-controlled Gaza and provoking a violent response from the Egyptian government.

While the average man and woman in the Egyptian street may be protesting for freedom and against corruption and government abuse, some of the organizers of the protests appear to have a different agenda–one of furthering radical Islam by aiding terrorists like Hamas with the help of Code Pink.

The English Defence League march in Luton 5th February 2011 to protest against Islamic Extremism. A record attendance of around 6-7000 members attended the demo marching through Luton and congregating in St Georges Square.

MICHAEL GOODWIN: Obama Strikes a Deal With the Devil as Mideast Meltdown Continues

Bachmann Blasts Obama‘s ’Socialism’, Invites Everyone Out for Drinks During CPAC Speech