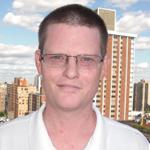 I received the heart-wrenching news a few moments ago that my friend Joshua Goldberg passed away from injuries sustained in a fall. I cannot imagine the grief that Lucianne must be feeling now – Joshua was her son. My soul weeps at the loss and I just cannot comprehend it.

Many of you did not know Joshua. His mom is Lucianne of Blogs Lucianne Loves, Lucianne.com and The Connection. His brother is Jonah Goldberg. To the blogger community, this is devastating news.

I have been blogging since 9-11-2001. In the years since, I have seen many come and go. But there was never a better friend; someone more willing to help with a question or say a kind word than Joshua. He was there on 9-11 – digging through the rubble trying to save others in their time of need. He was there when I needed help and when NoisyRoom needed assistance.

Lucianne, Jonah and the whole family – my prayers and thoughts are with you today. May God grant you peace and may you find comfort knowing that you haven’t lost Joshua, he is waiting and will see all of us in a little while. Joshua Goldberg will be missed…

The Lid: Joshua Goldberg: Rest In Peace My Friend

The Radio Patriot: So Sad…

Another great Beck show on Egypt as a springboard for world revolution. Some more New Zeal clips too!

Next week promises to be fascinating as Glenn will reveal more on the Muslim/Marxist alliance.

Don’t forget that that the guy who provides these videos could do with a little help right now to pay for computer repairs. Please go to The Daily Beck and give something through his PayPal button.

Good Tom Trento wake up call on the Muslim Brotherhood.

The Carbon Sense Coalition today called for an immediate end to government mollycoddling of wind power.

The Chairman of “Carbon Sense”, Mr Viv Forbes, said that a submission by the Coalition to the Senate enquiry into wind farms found that there is no proof that wind farms will reduce carbon dioxide emissions and it is ludicrous to believe that a few windmills in Australia are going to improve the global climate.

“Such wondrous expressions of green faith put our politicians on par with the Cargo Cultists and those who believe in the tooth fairy. The tax payers funding this largess and the consumers paying the escalating power bills are entitled to demand evidence and proof. There are so many state and federal green energy schemes that no one knows how much is being wasted.

“Not only is there no climate justification for wind farms, but they are also incapable of supplying reliable or economical power. So poor is their performance in every real test in every country that people world-wide are starting to ask if there is some deeper agenda.

“It was revealed just today that one of Britain’s most visible wind turbines produces just 17% of its rated capacity and delivers electricity worth far less than the government pays the promoters in subsidies.

“Wind power is so dilute that to collect a significant quantity of wind energy requires thousands of gigantic towers each with a massive concrete base and their network of interconnecting heavy duty roads and transmission lines. Then when they go into production, they slice up bats and eagles, disturb people who live nearby, reduce property values and start bushfires.

“Finally, to cover the loss of power when the wind drops or blows too hard, every wind farm needs a conventional power station (commonly gas-fired) with capacity at least twice the design capacity of the wind farm to even out the sudden fluctuations in the electricity grid.

“Why bother with the wind farm – just build the backup?

“There is no justification for the continuation of mandates, subsidies or tax breaks favouring wind power over other reliable and cheaper electricity generation options.

“Wind power promoters should compete on an equal basis with all other power options.” 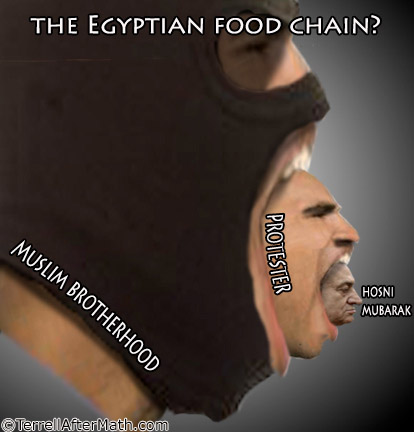 Events in Egypt are wrought by our electing Obama.

Another Tack: No one to trust

“We make our fortunes and then we call them fate.” – Benjamin Disraeli

Disraeli’s sardonic wisdom remains valid despite all of history’s convolutions and revolutions since his day. Nothing is propelled by blind destiny, because it’s foretold, inscribed on some astrological chart and preordaining consequences that cannot be averted.

Inevitably human hands pull the lever that sets cataclysmic geopolitical events in motion. The human hands that unsettled Egypt, and with it the entire Mideast, are primarily those of the American electorate which elevated Barack Obama to the presidency.

At that pivotal point it should have been clear that the end is near for whatever remnants of delicate equilibrium still endure in this region. Obama ushered in chaos even if he chose Cairo as his venue for the 2009 speech in which he sucked up to Islam. Egyptian President Hosni Mubarak significantly absented himself from that milestone sham. He could sense the ill-winds blowing.

This is eerily reminiscent of the series of mind-blowing blunders toward Iran during the term of Jimmy Carter, the past president most like Obama, though hardly as radical. In his memoirs, Ayatollah Khomeini’s first foreign minister Ebrahim Yazdi writes that “the shah was doomed the minute Carter entered the White House.”

One thing the world knows now: Obama will not help. Obama will do nothing. Hope and change are not connected with him. Iranian youth learned their lesson. He’s not for them.

Barry “Obama” Soetoro is a complete fraud, a most vomitous concentration of self-interest and racist hatred against all things white. There is nothing more to him that that. His skin is simply used by the oedipal white liberal globalists. To achieve the goal of the overthrow of America, Barry enthusiastically invites the world’s animosity toward America, particularly white America–white Christian America. He must drag America through the streets of world opinion, like the bodies of U.S. marines were dragged through the streets of Mogadishu and Fallujah.

This is Barry “Obama” Soetoro. It is already known that George Soros is puppeteering Barry boy. They have just created a “private investment company” called Siraj Fund Management Company, for developing the so-called “Palestine” entity in the land of Israel. But some believe Soros is playing Barry boy in the Egyptian affair as well.

Barry “Obama” Soetoro is a mere conduit for the white oedipal liberal globalists. They have rewarded him handsomely, of course. He was the perfect puppet, immune to prosecution because of his black skin. Such a traitor to America should have been hung long ago. That was the capital punishment once upon a time. But, our noble congressmen can’t even bring themselves to say the word “impeachment.” The Constitution says the House has sole power of impeachment (Article I, Sec. 2, par. 5), and so-called Republicans have complete control over the House! I say, of them, traitors every one. There is no other conclusion to make.

The highest political offices in the United States are mere personal, professional opportunities. The offices have little to do with the well-being of America. Barry is the blackhead of a giant pustule of personal aggrandizement. He came about because of the established infection. He isn’t the cause, but the piquant symptom. Nothing more.

That’s why there is no prosecution or impeachment. Congress is driven by the same spirit that’s in Barry. There are only illusions of propriety, manipulations of subjective justice, and pretentions of right doing.

“Silence in the face of evil is itself evil: God will not hold us guiltless. Not to speak is to speak. Not to act is to act.” – Dietriech Bonhoeffer