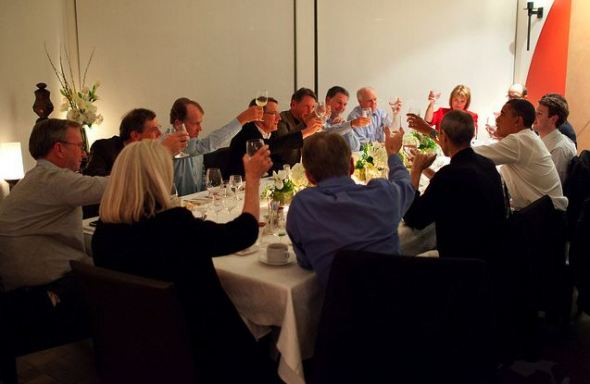 Under the guise of reaching out to businesses, President Obama lifts a glass to the mutual success of technology and the advances they will achieve in wiring the world.

“There was of course no way of knowing whether you were being watched at any given moment. How often, or on what system, the Thought Police plugged in on any individual wire was guesswork. It was even conceivable that they watched everybody all the time. But at any rate they could plug in your wire whenever they wanted to. You had to live—did live, from habit that became instinct—in the assumption that every sound you made was overheard, and, except in darkness, every movement scrutinized.” – George Orwell, 1984

WOODSIDE, Calif. — President Obama traveled Thursday night to northern California for an evening meeting with a group of Silicon Valley chief executives, among them Mark Zuckerberg, the founder of Facebook, and Steve Jobs, the ailing head of Apple.

The closed-door session with 12 technology leaders was held at the home of John Doerr, a partner at the major Silicon Valley venture capital firm Kleiner Perkins Caufield & Byers. Others in the room include Oracle founder and chief executive Larry Ellison, Netflix CEO Reed Hastings and Twitter CEO Dick Costolo.

Although some in the business world have had an often-tense relationship with Obama, such as the U.S. Chamber of Commerce, the president has been popular in Silicon Valley.

Obama attended a major fundraiser last October at the home of Google executive Marissa Mayer, and he met with Jobs on that same swing. Eric Schmidt, Google’s executive chairman, campaigned for Obama in 2008 and has served as an informal adviser on economic issues since then. And Doerr, a longtime Democratic donor, has served on the president’s Economic Recovery Advisory Board for the last two years.

White House officials said Thursday night’s meeting was mainly to discuss Obama’s innovation initiatives. He has promised to fund tax credits for research and development; to reform the bogged-down patent system; and to blanket the country with high-speed wireless-Internet connections.