For those checking, Trevor Loudon and Andy Moore are okay. Many, many are dead I am told. The city is impassable. I am praying for all of them and am very worried about Trevor’s parents. Please say a prayer for everyone in ChristChurch and New Zealand. Go to Maggie’s Notebook as she is running with the story and has more detail.

Trevor is one of the bravest men I know. He is a close friend as is Andy. It would be like losing family for anything to happen to either one of them. From Twitter:

pooroldluser Andy Moore
@lakecrazy trevor and I are ok. However many dead. City impassable. In CBD now

Will update in the morning…

There’s another Green group praising the EPA’s attack on America’s fossil fuel industry and legislators who support energy independence, this one’s called Operation Free. It will take a moment to continue while I wait for flower petals, birds singing sweetly and butterflies to clear away; the ambiance-filled air which accompanies the very announcement of their presence prohibits deeper thought.

“We’re a coalition of leading Veterans and national security organizations who recognize that climate change is a major threat, and support fast, bold action. It is time for Americans to rise to the challenge, and we’re taking on the fight.”

I have to pause once more as Sleeping Beauty finishes spraying the air to get rid of lingering petroleum odors…good thing I have my brown shoes on. (author received no recompense for referencing a popular product)

These folks still are working to implement policies based on the premise that man-made global warming is linked to our consumption of fossil fuels; that CO2 is supposedly a major threat to our planet and is the source of all our ills. They embrace the United Nation’s Intergovernmental Panel on Climate Change (IPCC) findings which have been shown to be nothing more than a political agenda for wealth redistribution (socialism) supported and contrived by scientists who’ve sold their souls in order to remain on the dole.

If you read a little more about the august groups which make up Operation Free, there really aren’t any surprises. On the top of their “get to know us” website page is the Truman National Security Project. Would you like to get to know these folks?

“The Truman National Security Project is a national security leadership institute, the nation’s only organization that recruits, trains, and positions a new generation of progressives across America to lead on national security. Our mission is to provide the skills, knowledge, and network to create an influential force of leaders across the country who advance strong progressive national security policy.” (emphasis added)

Unless you’ve been spending your life in a closet; that translates into, “We’re Radical Socialists unhappy living in a society which permits others to live as they please. If given half a chance we intend to change your constitutionally free society into something much better; a society which makes it impossible for individuals to do anything which the State deems unhealthy, unsafe or which might upset anyone with a different point of view. We all have letters after our names; proof we know what’s best for the average ignorant schmuck.”

Operation Free has enlisted the support of veterans, those who’ve been placed in harms way because America needs oil and for no other reason. America goes to war to obtain oil; isn’t that what we’ve been hearing from these malcontents?

“Hell no – We won’t Go!” They scoff at American soldiers, deride their noble efforts and call them baby killers. If a decorated hero attends a progressive university he’s insulted and told he’s not welcome. “Racist!”

American based oil companies, the folks who actually produce a much needed product have been handcuffed for years. They can’t drill without a permit signed by each and every Green watch dog group. Is it any wonder we’re importing oil from countries like Venezuela or our real good buddies in the Middle East?

The folks at Operation Free claim they’re interested in our national security. If that were so then turn our oil companies loose and make America energy independent; open up ANWR and other known oil reserves to competitive drilling. If Green Energy is the way of the future it will happen as technology makes it profitable. The idea of killing the Golden Goose which has brought us this far is foolhardy at best, criminal if you consider the price America would pay if they succeed in destroying our constitutional form of government.

Operation Free…no, I don’t think so. With so many anti-capitalists trying to destroy our freedoms, all in the name of cleaner air through socialism, maybe you guys should be called Operation Shackle or better yet Operation Progressive. 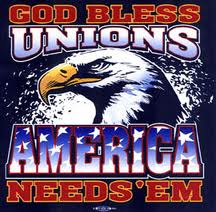 Until I saw the thousands of loyal union members expressing solidarity by their courageous protests in Wisconsin, I had no idea of the great perks union membership entailed. Now that I do, I want in.

And not just any union – I want to join either a teacher’s union or the government workers union. Imagine – if I belonged to either of those unions I would never be able to be fired. Not only that, no one could complain about my work, or lack of work. And even if they did, the grievance process is so long that it wouldn’t impact me for several years. My union brothers would stand beside me, no matter what. Even if they found out about that old felony conviction. (That conviction was totally unfair!)

In Arkansas, they’re even paying a teacher to do nothing after they found out she had been convicted of prostitution. It’s called “paid leave.” How cool is that?

If I belonged to either of those unions, I would only have to pay for a fraction of my own health care, and I would even be exempt from Obamacare. Cradle to grave security. Where do I sign up? (Did I mention free Viagra?)

If I belonged to those unions, my pay would be around 40% higher than those saps who work in the private sector. And if someone threatened to lower it, I’d have the President of the United States speak out on my behalf. Totally awesome!

If I belonged to those unions, I would have more power than my stupid boss. I’d be able to take him to task for oppressing the workers (me!) and everyone would automatically believe me and take my side. After all, everyone knows capitalism is evil and bosses profit off my misery. I’d be a victim, not an exploiter. My mom would finally be proud of me.

If I belonged to those unions, I’d be able to take the moral high ground. (Finally!) If you don’t believe me, than you must be one of those idiots that watches Fox News. In case you haven’t heard, Fox News lies. (I saw that on TV so I know its true.)

I want to join one of those unions because then I’d be part of the community of man, a “worker of the world.” I’d instantly be accepted as a valiant warrior fighting for the underdog. I’d have lots of new friends. Sure, I might have to actually work, but that’s OK by me. As long as my rights are respected.

In return for all this, all I have to do is toe the union line. Hey, I don’t have any problem being bussed to other states to picket when required. And the dues they take out of my paycheck will be used to buy politicians who are guaranteed to support the union cause. Small price to pay…

I won’t even mind spending work time on political campaigns in order to elect officials that back unions. Going door to door might even help me lose the weight I gained right before my unemployment benefits ran out.

I want to be part of something important. I’ve been lonely too long. I yearn to fight for a righteous cause, like I did in the 60’s. I want in. And just to let you know how serious I am, I’ll even promise to vote for Obama, even though I think he’s a joke.

Where can I sign up and when do the health perks kick in? I feel a cold coming on. (Just so you know, I don’t need the Viagra.)

Israeli MK: We Can No Longer Rely on the White House, Obama Doesn’t Lead, He Follows… (Hat Tip: Larwyn)

The Libyan Tribe Has Spoken: Stop Oppressing Protesters or We Cut Off Oil in 24 Hrs (Hat Tip: Larwyn)

US must be removed from Islamic world: Khamenei

The Libyan Central Government Building Is On Fire, And Oil And Silver Are Surging

If You Still Don’t Think The Weather Is To Blame For Grain Prices, See This Chart

Bad News For The PIIGS: Angela Merkel’s Party Gets Crushed In Regional Elections

So much for the diet: Anti-obesity crusader Michelle Obama feasts on ribs during pricey family vacation (Hat Tip: Brian B.)

On Rick Santelli’s “Meet The Press” Appearance, A $113 Trillion Future Rounding Error, And The Metamorphosis Of The American Dream To A Nightmare (Hat Tip: Brian B.)

Researcher: Roundup or Roundup-Ready Crops May Be Causing Animal Miscarriages and Infertility (Hat Tip: Brian B.)

Presidents Have To Share A Holiday, But MASS. State Workers Score On Two Bogus Days Off

Paul Ryan: ‘We’re Not Looking for a Government Shutdown’

The Real Crisis That Will Soon Hit the US (Hat Tip: Brian B.)

Unions at It Again: D.C. Being Made to Hire Back Fired Teachers

Uncertain future has some storing up on food and supplies (Hat Tip: Brian B.)

Connecting the dots to anarchy (Hat Tip: Brian B.)

Got Gas Money?: Cashing In on American Oil in an Age of Scarcity (Hat Tip: Larwyn)

Fresh from a nap in the White House, union boss steps up for union thugs (Hat Tip: Larwyn)

End of Fannie and Freddie

Gas prices skyrocket; up 55 cents from year ago

Undercover agent slips through DFW security with gun in bra

SANTELLI: BUDGET CRISIS IS NEXT 9/11