The South Park boys sang “Blame Canada,” but in reality it was Americans who saddled their Northern neighbors with socialism.

Like the President himself, Solis has a history with both the Communist Party USA and Democratic Socialists of America, two of the main groups backing recent nationwide labor protests.

“Labor is planning a mass mobilization nationwide on April 4 to support workers’ rights, specifically the right to collectively bargain.

The decision was reached at the AFL-CIO Executive Council meeting in Washington, March 1-2, according to a nationwide conference call of activists. But the council did not formally announce it.

Instead, the word was passed to activists from the Communications Workers, the Teachers, other unions, allied student, civil rights and environmental groups and others.

They were asked to dream up events at work places to show solidarity with workers who are standing up for their rights, notably public workers in Ohio, Wisconsin, New Jersey, Indiana and other states.

Suggestions for solidarity include vigils at houses of worship, wearing red pro-worker clothing, and demonstrations and marches on city halls and state capitols…

The workers’ cause, though not the specific protest, was joined by Obama administration Labor Secretary Hilda Solis, who spoke on the conference call.

“I’m proud of all of those who went down to Wisconsin, and I try to provide support and empowerment” from her cabinet post “for middle-class people who must be at the table” when their futures are decided, Solis said.

“Public workers – nurses, police officers, fire fighters – are willing to make sacrifices,” the secretary added, alluding to the excuse GOP governors have used to demand that state and local workers take large pay and pension cuts and pay much more for health insurance. “Budget sacrifices are one thing, but demanding people give up their voice on the job is another.”“ 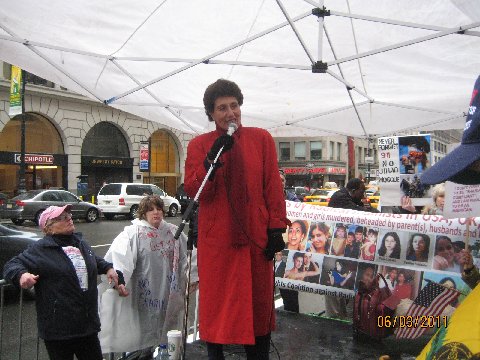 Human rights activists of all stripes took to the streets on Sunday afternoon, March 6th in a rally supporting the upcoming proposed congressional hearings in which Rep. Peter King (R-NY) will discuss the increased radicalization of American Muslims and the potential for an implementation of Sharia law in the United States. Approximately 80 members of the Human Rights Coalition Against Radical Islam, the Liberty Alliance, the Coalition to Honor Ground Zero, Americans For a Safe Israel, Liberty Rocks, Blue Collar Corner and Women United International gathered in the pouring rain near Times Square to make their voices heard. Rep. King is the chairman of the homeland security committee in Congress and has represented New York’s 3rd congressional district since 1993. His district includes parts of Nassau and Suffolk counties in central Long Island.

According to their press release, the Liberty Alliance stated that their gathering comes as a “counter-protest in response to a rally being held by Imam Feisal Abdul Rauf and his wife, Daisy Khan, Imam Shamsi Ali and others in Times Square, entitled, “Today I am a Muslim, too.” Couched in language of “interfaith dialogue,” Imam Rauf and his supporters plan to attack decent Americans as “Islamophobic” for expressing their legitimate concerns about terrorism, Sharia law and jihad. The focus of their attack are Congressman Peter King’s upcoming Homeland Security Hearings.”

Daisy Khan, the executive director of the American Society of Muslim Advancement (ASMA), said in a press release that her rally will be a forum for “Muslim and non-Muslim alike to stand together in solidarity, speaking out as a collective American voice. Concerned Americans will take a unified stance against a rising Islamophobia caused by anxiety, misinformation and ignorance. Despite best efforts to engage and integrate into American society, certain leaders nonetheless, continue to see Muslims outside of the American family portrait. Rep. Peter King, for example, will hold congressional hearings addressing, “The Radicalization of Muslim communities in America,” with testimony solely focusing on the Muslim community.”

The Kuwaiti born Imam Rauf and his wife Daisy Khan had spearheaded the building of the controversial mosque near Ground Zero in New York, which they dubbed as the “Park51” project.

Beth Gilinsky of the Liberty Alliance told those present at the rally, “as Americans are murdered here and abroad by Islamic radicals, Imam Rauf tries to turn the facts upside down and blames the United States for Islamist violence and hatred. He says that “US policies were an accessory to the crime of 9/11.” He claims that Muslims are targets of widespread discrimination, hate speech and physical attacks. Meanwhile, the imams are working overtime to make Sharia law look benign. Indeed, Imam Rauf claims that “the American political structure is already sharia compliant.””

Denouncing President Obama for being unable to speak the words of truth regarding the authentic nature of jihad and Islamic terror, Helen Freedman, executive director of Americans For a Safe Israel, said, “We are living in the most dangerous of times and as Americans we would have hoped for a president who had the courage and temerity to label the enemy as they are. Those who threaten our safety and welfare are radical Islamists living amongst us and those on foreign shores and we should have leadership that is not afraid to say just that.”

She also took aim at Rabbi Marc Schneier of the Park East Synagogue in Manhattan who declared, “I am a Muslim,” at a February 15th rally in Newark, New Jersey and called for instituting a twinning program between synagogues and mosques. Rabbi Schneier has aligned himself with the rally organized by Imam Rauf and Daisy Khan and was listed as one of their speakers. Moreover, he is reported to have labeled aspects of the upcoming congressional hearings as “un-American.” Joining Ms. Freedman in her castigation of Rabbi Schneier was Beth Gilinsky who said, “I am both appalled and totally shocked that Rabbi Schneier has enabled Imam Rauf in his quest to implement Sharia law in America. No one who truly cares about human rights and interfaith partnership can ignore the widespread and well documented evidence of slaughter and barbaric human rights abuses of non-Muslims, women, young girls and gays under Sharia Islam across the globe.

Tim Sumner, co-founder of the 9/11 Families for a Safe and Strong America said, “Liberty Alliance coalition members will condemn Rauf’s efforts to falsely portray his efforts as a civil rights initiative. They will not derail King’s hearings.

Dr. Marvin Belsky of the Human Rights Coalition Against Radical Islam said, “Those who support the efforts of Imam Rauf and Daisy Khan to help in the proliferation of sharia law, can only be classified as “useful idiots” as Vladimir Lenin once said. The agenda of radical Islamists is clear, yet those who are indignant over “purported racial profiling” don’t grasp the concept that these forces would use violence and terrorism against anyone who is not a Muslim, as they have done for centuries.”

“There is an unholy alliance between the political left and the radical Islamists” continued Dr. Belsky. “Among those organizations and personalities aligning themselves with Imam Rauf are the most anti-Semitic and anti-Israel,” he said

Simon Deng, a former Sudanese slave said that he had just returned from the southern Sudan where it is expected that Christians will once again have a voice in government affairs after a recent election. Speaking of the freedoms he enjoys in the United States he warned, “As a young boy I was sold into slavery to radical Islamists. I am so proud to now be an American and I exhort you all to hold on to our freedoms for dear life. Over three million Christian Sudanese people were murdered by Islamists and we must fight to uphold our cherished democratic principles before they are taken from us.”

“These congressional hearings are designed to learn more about the American Muslim community as it pertains to ties with violent extremist groups who use terrorist tactics to get their message across. We applaud and completely support Congressman King’s efforts to further delve into this investigation. As Americans, we must realize the gravity of the situation and act immediately to defend our human rights,” said Beth Giliinsky.