While Wisconsin Senate Minority leader Mark Miller was the leader of the 14-strong Democrat “Flee Party,” who recently skipped Wisconsin to avoid voting on the “Budget Repair Bill,” fellow Senator Spencer Coggs was his most vocal lieutenant. 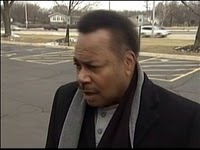 “We as a caucus have reaffirmed Mark Miller as our leader and spokesperson,” Sen. Coggs said. “And Senate Democrats will not be split by the desperate attempts of Republicans seeking to divide us…Our leader Mark Miller has made his statement in response to the Governor’s press conference, and today we re-confirmed that we are with him 14-strong.”

Mark Miller has ties to the U.S.’s largest Marxist organization, Democratic Socialists of America, one of the key instigators of recent militant protests in Madison. Wisconsin and supporter of protests further afield. It appears that Spencer Coggs has similar connections.

Prior to being elected to the State Legislature, Spencer Coggs worked as a postal worker, industrial printer and as a City of Milwaukee Health Officer. As a Health Officer, Spencer was Chief Steward of the heavily D.S.A.-infiltrated American Federation of State, County and Municipal Employees.

By the mid-1990s, Coggs was a several term veteran of the Wisconsin Legislature and also a member of the Progressive Milwaukee Steering Committee.

Progressive Milwaukee was a Wisconsin affiliate of the radical New Party, later made famous by its most successful member, Barack Obama.

The New Party was created by D.S.A., the ultra-left Institute for Policy Studies, D.S.A.-led SEIU and D.S.A.-influenced ACORN. A key founder and one time chairman of Progressive Milwaukee, was prominent Wisconsin labor leader and D.S.A. member, Bruce Colburn.

In 1996, Spencer Coggs was one four Progressive Milwaukee/New Party-backed candidates running for state office – one of the others being currently serving Wisconsin Congresswoman Gwendolynne Moore.

The Coalition worked to help Miller recruit new cosponsors for the bill, one of whom was Spencer Coggs.

Coalition Treasurer at the time was George Robson, co-chair of Madison Democratic Socialists of America, while Vice Chair was Linda Farley, MD, from Physicians for a National Health Program – which was founded and led by D.S.A. member, New Party founder and Barack Obama mentor, friend and personal physician, Dr. Quentin Young.

In 2010, while running in the primary for Wisconsin Lt.-Governor, Senator Spencer Coggs was “proud to receive the endorsement of Citizen Action of Wisconsin.” Citizen Action was founded by D.S.A. “friend” Heather Booth and is affiliated with the D.S.A.-controlled, Chicago based “community organizer” training school, the infamous Midwest Academy.

In 2010, Spencer Coggs served on the Board of Directors for the George Soros funded Progressive States Network, an organization which seeks to “transform the political landscape by sparking progressive actions at the state level.”

Other P.S.N. board members include:

Clearly the Wisconsin State Senate is in urgent need of a socialist “spring cleaning.”