UPDATE: Just had a thought…. I wonder when Obummer learned that she was going to India. And Israel. Think that got him a little wee-wee’d up? For sure Moochelle and Jarrett’s sphincters tightened, just a leee-tle bit. Heh… 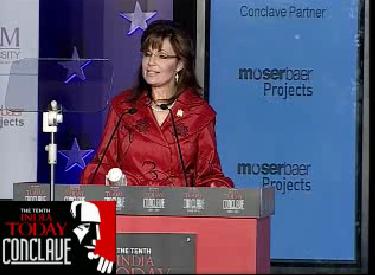 Jim Hoft at Gateway Pundit has the video — here’s the story.

“Be it what it may after your trip when you leave here and open your window… We hope you see India.”

Sarah Palin is the first Republican leader to speak at the event in New Delhi.

Sarah was invited to speak on her Vision for America.

Today’s tea party is a strong and vibrant movement in the US.

ENERGY is the key. My vision for a free and prosperous America involves an emphasis on energy.

On green energy – I am in favor of an “all of the above approach” to energy.

Unfortunately, though some have stymied responsible drilling. It means we continue to transfer hundreds of millions of American dollars to foreign regimes. Everything is touched.

As government locks up land – they try to tell us that green jobs are our future.

“A recent British study found that for every green job, 4 jobs were lost.”

This is social engineering.

Americans can tap into our own natural resources. And natural gas- green and efficient. Natural gas is an ideal “bridge fuel” to the future. It’s a false fairy tale for government to interfere and for Americans to believe that we don’t need oil and gas.

“Big government ideas are once again being thrown into the ash heap of history – but they’re not going quietly.”

The future lies with us. There are few limits to what India and America can do together. We both want to expand trade and investment with allies.

It is our people who are driving this relationship.

Our ties and our bonds are deep. They’re not driven by a free people and a free markets not by conclaves.

On social media – We should look at this as an opportunity to advance freedom.

This hunger for freedom is not just American. We have such a connection. Half a world apart but connected by this. We can lead by example.

WHAT AN AMAZING SPEECH!!! 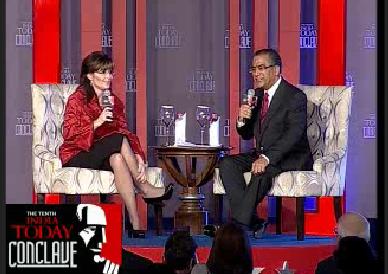 On trade with India –

Sarah Palin: We are thankful for the free trade agreements throughout the world.

Sarah Palin: China has a choice. We need to be sure and India needs to be sure that we are clear with their expectations… We say they manipulate their currency. They accuse us of the same.

…What’s with the military buildup? We have concerns… Again we look forward to see them making the right choice.

On the tea party movement –

Sarah Palin: The tea party patriots just want the Constitution to be followed. It’s smaller smarter government. It’s too good to have a leader.

On campaigning for VP –

Sarah Palin: You can’t really trust the media. You have to have the boldness and courage of setting the record straight. Especially when they have made their choice… I’m not just going to sit back and take it. I’ve learned you can’t just trust the media to set the record straight. Republicans have the fighting instinct of sheep sometimes. I don’t play the victim card when they do choose to set the election straight.

Question: But so were you.

Sarah Palin: But I wasn’t on the top of the ticket.

Sarah Palin: I am a strong supporter of peace through strength… If we want a more peaceful world India and America must work more closely together.

Her role in Republican Party –

Sarah Palin: I’m pretty independent and some people don’t like that… I’m a mom and I just don’t have the time to play some of the games the guys want to play.

Last question – Will you husband be called the first man?

Closing statement: When I was waiting for your speech I was talking to an official and he said he was looking forward to her speech. I asked him why and he said, “Because Sarah Palin is a a friend of India.”

As Jack Wheeler wrote (and I posted), she’s running, folks. And if Providence decides to bless America, she’ll win.

Sarah’s in India, heading for Israel.

Read much, much more at Freedom’s Lighthouse…

Louis Farrakhan Off-boards the Mother Ship Long Enough to Offload on Obama:
“Who the hell do you think you are?”

As O and the F-man share the same worldview, this vid explains perfectly O’s double-mindedness vis-à-vis Qaddafi. He feels pressure from his base to support the tyrant, which conflicts with the pressure he feels from our allies to help topple the dictator. Poor O, the leader of the free world once again finds himself representing the very cause he hates most — liberty.

WHY INFLATION HURTS MORE THAN IT DID 30 YEARS AGO

Food Costs at Records as U.N. Warns of Volatility

From the 2010 election campaign.

The U.S. Bureau of Labor Statistics (BLS) reported their latest consumer price index (CPI) inflation data this past Thursday. According to the BLS, U.S. consumer prices for the month of February 2011 were up 2.11% on a year-over-year basis compared with February 2010.

Even the manipulated BLS numbers are showing that price inflation is beginning to spiral out of control, yet the mainstream media is doing everything possible to downplay inflation. Despite the BLS’s reported rate of price inflation rising above the Fed’s target, the media is ignoring this and referring to “core CPI”, which excludes food and energy (the two very things Americans need the most to live and survive). The media is focusing on the core CPI number, which was up 1.09% from a year ago compared to a year-over-year increase of 0.95% in January (even the growth of this meaningless number is rapidly rising), and saying that inflation remains below the Fed’s target.

NIA believes that real year-over-year price inflation in the U.S. is now approximately 6% on a conservative basis. NIA predicts that even the BLS’s artificially low manipulated CPI will rise above 3% on a year-over-year basis by the early summer.

In November of 2010, the CPI was only up 1.1% on a year-over-year basis. At 2.11% in the month of February, the CPI’s year-over-year growth has risen by 92% over a period of just three months. In percentage terms, it is shocking just how fast CPI increases are rapidly accelerating. Yet, not one person in the mainstream media is pointing to this 92% figure, which NIA considers to be the most important (it is probably the most accurate piece of data that we can possibly derive from the BLS’s CPI reporting).

The media continues to say inflation is low and not a problem. At the current rate of 92% in quarterly (three month) increases to year-over-year CPI growth, the CPI’s year-over-year increases could exceed 4.05% by May, but NIA is being conservative with its projection of 3% in official reported year-over-year CPI growth to be reached by June of 2011. By then, NIA believes real price inflation will be around 7%. In our opinion, real U.S. price inflation is likely to rise into the double-digits in the second half of 2011.