Kia Ora Gaza sounds friendly and has a very cutesy logo. The name conveys a Maori greeting to the people of the “besieged” Gaza Strip, sandwiched as it is, in the buffer zone between Israel and Egypt. 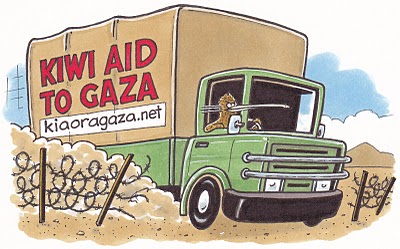 In fact, Kia Ora Gaza is a militantly anti-Israel group and is the New Zealand wing of the infamous George Galloway’s Viva Palestine.

It is therefore no surprise to learn that Kia Ora Gaza is controlled by New Zealand’s Socialist Worker, a sister party of the British S.W.P.

In October 2010, a six-person Kia Ora Gaza team was part of the huge Gaza aid convoy that successfully broke Israel’s blockade to deliver “desperately-needed medical supplies along with a message of international solidarity.”

“Our Kiwi volunteers are authentic heroes who put their bodies on the line to help people in need on the other side of the world,” said Grant Morgan, co-organizer of Kia Ora Gaza. 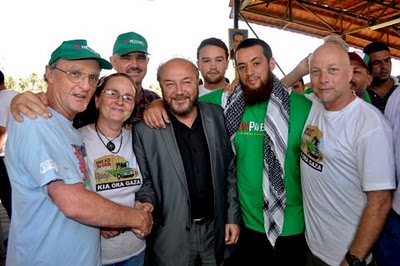 Of those pictured above: 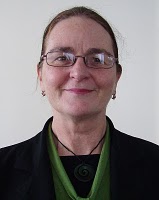 Kia Ora Gaza is a small cog in a big anti-Israel machine. But New Zealand socialists, like Kiwis in general, tend to punch above their weight.

Any one concerned with the survival of Israel should be finding out as much as possible about the worldwide Marxist networks dedicated to the Jewish State’s destruction.