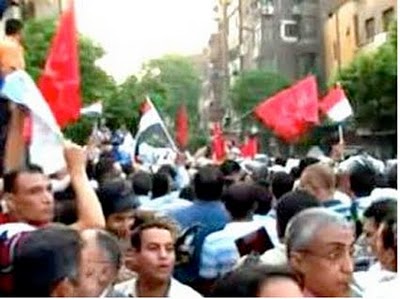 On March 15, the Communist Party of Egypt announced that after many years underground because of repression, it will be assuming open, public political activities once more.

The announcement came after “an extensive meeting with all of its bodies” and was unanimous.

The original Communist Party of Egypt, the Hizb al Shuvuci al-Misri had been founded in 1922, when Egypt was still a monarchy and very much under the thumb of British imperialism. The last king of Egypt, Farouk, was overthrown by an uprising of young army officers in 1952. Out of that revolution came the 14-year regime of Colonel Gamel Abdel Nasser, a radical nationalist who worked to break Egypt away from subservience to Western capitalist powers. In 1965, the Communist Party of Egypt merged into Nasser’s own movement, the Arab Socialist Union.

A number of former Communist Party activists dissented from this merger and formed their own independent journal, Al-Inisar (Victory), starting in 1973, which led to their re-founding the Communist Party in 1975. Under the governments of Anwar Al Sadat and Hosni Mubarak, the re-founded Communist Party of Egypt faced repression and was not allowed to run in elections. However, it did not disappear and did not abandon the struggle for democracy and socialism.

When the demonstrations against the Mubarak regime began earlier this year, the Communist Party of Egypt, working in unity with other left-wing dissident groups, quickly gained public visibility as a key voice in the secular opposition.

Although some of these goals have been achieved, such as the dismissal of Mubarak, obviously others will have to be the focus of intensive struggle, and the situation in Egypt is hardly stable. This is why the Party has decided to reorganize itself as a public political force. The Communist Party of Egypt is involved in various discussions with other democratic parties and organizations about the future of the Egyptian nation.

The U.S. Socialist Workers Party is sending cadre fresh from the battlefields of Madison, Wisconsin to Cairo to peddle Marxist literature to the Egyptian masses.

“I just returned from Madison, Wisconsin, this past weekend, meeting and talking to working people involved in the fight there, introducing them to the Militant,” said Dan Fein, a worker at a pharmaceutical plant in New York. “Soon, I’ll be doing the same thing in Cairo.”

Fein is part of a team of socialist workers from the United States, Canada, and United Kingdom who will travel to Egypt to participate in the Tahrir Book Fair, March 31 through April 3. Paul Mailhot, editor of the Militant, is organizing the team, which will sell subscriptions to the paper, as well as books and pamphlets published by Pathfinder Press.

Hosted by American University in Cairo, the fair was “born from the joy of the Tahrir Square revolution,” the organizers explain. More than 100 exhibitors are expected, most from the Middle East and North Africa. Thousands of titles will be on sale in Arabic, English, French, and other languages. Author signings, forums, and other events are planned.

“For those few days,” organizers say, the fair will be “the largest and most diverse bookstore in the Middle East, situated on the corner of this now world-famous square.”

Socialist booksellers of the world unite!

Sarah Palin the Anti-Obama: Why Aren’t We Putting Our Foot Down & Telling the Palestinians to Quit Their Bombing of Innocent Israelis? (Video)