We received a troll note the other day from some progressive individual on the left. Her logic leaves much to be desired. But I wanted everyone to get to know her and see what she said. Yes, she will get her five minutes of glorious fame, only to be leveled by conservative logic. She should know by now, trolls never win. Yes, M. A. Rosenthal, we will blog about this – but I wager, you are not going to like it. Facts hurt and that is what you see on this blog.

One of our contributors, AJ, has delivered an irrefutable, massive smack down to our esteemed attacker. Let the games begin! 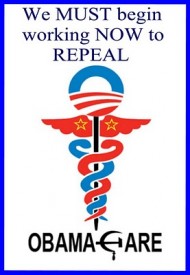 From: Vision To America

Do you realize how unrealistic you people are? The normal and I mean normal folks don’t look at life the way you crazy’s do. I read your health care blurb. Why don’t you write about what happens to folks now on your supposed open and free market? No God forbid, we wouldn’t want to offend the insurance companies.

I am a small business owner. For a family of four, I pay $2500.00 a month for my premium. With doctors and pharmacy costs, I pay about $3000.00 a month for health care. I will gladly take the new health care bill over what I have now. There is NO WAY that I could add employees on with these health care insurance costs. No WAY! Why is it you people never talk about what is really going on with folks. There are many business owners we know that have exactly the same story.

No and I mean no suggestions from the right about health care in this country fixes any of the problems that exist right now. But do you talk about that?

Also, the people in this country are getting tired of hearing you people pop off about the founding fathers. They would never had thought greedy people would exist like they do today. My suggestion to you is why do you take a closer look at REALITY, and then blog about this. You have a following of the stupidest people in the country who constantly vote against their own best interests, and I would say you are one of them!

You’re kidding, right? There was no open and free market in healthcare because health insurers were restricted by the government to sell only in the states they were told to (my family has only 3 to choose from). If all health insurers would be allowed to operate in any state, competition would have brought the cost down because we citizens would have chosen to give our dollars to the insurer who gives the lowest price for good healthcare coverage. Do you shop around for the lowest car insurance? Of course you do. The “other side” recommended opening things up so that more insurers could operate in more states, but they were told “I won.” Ask your doctors how much they pay in malpractice insurance; don’t you realize they pass that cost-of-doing-business onto the consumer? The “other side” recommended lawsuit (tort) reform but were told “I won.” Practical solutions that wouldn’t cost the government (i.e. taxpayers) anything and would have dramatically reduced the cost of our healthcare.

Since Healthcare Reform was enacted, my family of four has had to endure a 58% increase in our premium and we just got a letter from our employer last week explaining why Healthcare Reform is bringing another significant increase to our premiums for the upcoming enrollment period. Same health plan – skyrocketing increase that’s crippling low and middle income families and small businesses. It’s not insurance companies, it’s the President’s Healthcare Reform bill. If you were upset with the cost of healthcare before, why aren’t you upset that the cost of it is going through the roof now?

What you see on the healthcare tab at NoisyRoom are the facts about the bill that was signed into law. If you don’t like those facts, vote against the people who made it the law of the land… including a President who has given over 2000 waivers to his corporate and union buddies.

The only way you could be happy with Healthcare Reform is if you plan to opt out and pay the penalty – which is far less than what healthcare coverage now costs. Know that if you opt out, you’re doing so off the backs of the majority of hard working Americans – the low and middle income families whose premiums will continue to skyrocket to cover what you’re not paying for your healthcare. Two years from now, when it’s fully implemented, come back and let us know if you like the healthcare you, your family and your employees are getting under the government exchange/government dictated plan.

What’s been happening to people before the bill was passed? They were receiving quality healthcare – the best in the world. Our child has a disability and was receiving excellent care, but now with the new Healthcare Reform law, he’s terrorized because his healthcare providers force him to answer questions about sexuality and private family matters that his disability prevents him from understanding. We live in a state filled with people who crossed the border illegally and they all receive excellent care. There’s actually an entire system set up whereby they fill out some paperwork and receive all the medical care they need – free of charge. One of my relatives in a different state got a free tummy-tuck and breast surgery (to perk them up) after her free stomach-staple surgery. Every bit was free of charge. My nephew broke his wrist and got excellent care and it didn’t cost him a dime. I could go on and on with examples in my own family. So that’s what was happening to people in this country who couldn’t afford healthcare, didn’t want to pay for healthcare and/or who are here illegally.

You mention greed and the Founding Fathers. Check your history; they knew there was greed (why do you think they wanted freedom from European rule and why do you think the Boston tea party occurred – give me a break!!). And they knew government would eventually become tyrannical. You say “your supposed open and free market”… if you live in America, that’s how things are supposed to be here. If you want a socialist or communist system, go to another country for that. Even though Americans have been dumbed down in public schools, 83% still prefer a free market system. If you’re one of the 17% who don’t, not a problem… go to a country that has the kind of system you prefer while we work to get our free market system back.

Who are the greedy ones? Those who have government jobs (paid for by us, the taxpayers) and want us to pay for their healthcare, pension and raises while we suffer with less and while our President uses our money to create jobs in OTHER countries while eliminating jobs here? Progressive business owners who made their billions and millions off our free market system (e.g. Bill Gates, Warren Buffet, George Soros, Michael Moore…) but now want to end our free market system? And the legislators who have amassed incredible wealth yet live off the hard working taxpayers with fat lifetime pensions and Cadillac healthcare plans all on our dime and on top of the massive wealth they already have (e.g. Nancy Pelosi, Barack Obama, Harry Reid….)? Why do you know so little about those you support? Have you simply bought into their propaganda (from both sides of the aisle) because it sounds good and you just want someone to hate… whoever they tell you to hate? A perfect example is gas prices… they tell you to hate ‘big oil’, right? Who were you hating when gas was this high before?… they told you to hate Bush. The loud and vulgar 17% follow along like sheep to the slaughter. Unbelievable.

You chastise people for discussing what’s really going on, yet you won’t look at the reality. Know that your inability to see clearly is shared by only a small percentage of the people in this country. The 2010 elections proved that to be the case, and I trust 2012 will too. Wake up before it’s too late and the freedoms you and your family have enjoyed are taken away. If you can’t see that it’s happening at a rapid pace, it’s because you’re not looking at reality. Please wake up.

Herman Cain is indeed a great patriot and a conservative constitutionalist.

See our research on America’s enemies – the progressives and Marxists at KeyWiki.org.

See our research on Barack Obama and Hillary Clinton at KeyWiki.org.

RightChange presents “PolitiZoid – Mystery Presidential Theater” where the President explains why you should like higher taxes — along with a little bit of commentary!

This effort is being pushed by the same pro-union people who boycotted banks and stores whose management gave to Walker’s campaign.

Collectivism and Marxism – this progressive loon does not even try to hide it any more….