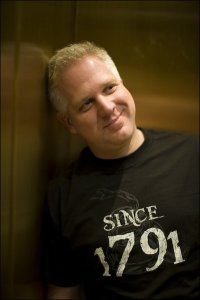 By now, everyone has heard of Glenn Beck’s impending departure from Fox. Many, including myself, felt a profound sense of sorrow at the announcement. He has become a bastion of sanity in an ever increasing media whirlwind of lies, deception and propaganda. Beck brought facts, hope, morality and grounding to the American people, who welcomed him for the most part with open arms as one of their own. He connected with many of us on a gut level where we sensed the rightness of his insights. We learned to question everything and those, like myself, have literally morphed into professional researchers and hunters, exposing progressives and Marxists anywhere and everywhere we can find them.

It’s hard to gauge what is brewing at Fox these days, or to decipher the business logic they are employing. But, I for one, am not a loyal Fox fan. I’m a loyal Beck fan. It is strange that this would happen, considering Beck had the third highest rated show on all networks, attracting 2.2 million viewers a night. The left never had a prayer of even coming close to his viewership. I can’t imagine how this won’t hurt Fox, but their loss will be our gain, of that I am sure. Beck’s company has doubled in size this year alone and he will keep growing, using all available media and blazing trails the left will come to fear and dread.

Before Media Matters and the other leftists out there get overly giddy with their perceived victory, I have a few words of caution for you. Beck has not departed the national scene – far from it and his dance card is full. All of us – not just Beck – are gearing up to come after you ten times more than we have previously. We are not financed as you are, but we have something you don’t have – a love of country; a devotion to what is right and honest. Our research and our fight has just begun. When Beck says you will long for the days that he was on Fox, he means it. He will be reaching out to more and more to spread the truth to those who will listen. He is connecting with all those who will fight the bottom up, top down, inside out strategy of Obama’s goon squads. Soros’ victory over Beck is a false one – you have only encouraged him to follow his conscience and take the fight to a new level.

Since I don’t personally know Glenn Beck, I cannot speak as to what he will do next. But I can speculate. He will do comedy tours that will bring hope to many Americans, just as the USO tours did in previous wars. He will keep writing and his readers will multiple by the millions. I believe that Insider Extreme will grow more and more in educational aspects and specials. His radio show will grow in market share massively. I predict he will move to no. 2 behind Rush Limbaugh. He will do specials on Fox that will be hard hitting and stunning in their research and depth. The left will not be able to hide from what is exposed concerning their plans and the webs they so industriously weave. The Blaze will become a news powerhouse and I will relish its rise and the continued growth of the Beck media empire…

Here’s to you Glenn Beck! We are with you all the way and I look forward to the coming challenge and a good ole’ fashioned American fight. A bigger, better game has just begun and we are going to make it the most well-exposed chess board the world has ever seen. We’ve had enough of the lies and regardless of how our government tries to regulate and strong arm us to death, we will fight back. We will not roll over and meekly let you grind your boot on our necks. We want you to know, we bite… We will fight back against Marxism/progressivism with our last breath. You can take your global government and shove it. Let’s dance…

From evil, spooky dude himself…

Hey Media Matters, even IF you build it, they won’t come. Progressive/Marxist asshats… Liars.

Another liberal in desperate need of couch time… Time to take up basket weaving.