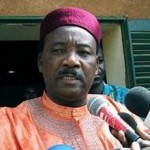 The Socialist International has warmly congratulated Mahamadou Issoufou, leader of the Party for Democracy and Socialism of Niger and a Socialist International Vice-President, who was sworn in as President of the Republic of Niger on 7 April, having won the second round of the presidential elections on 12 March with 57.95% of the vote against 42.05% for former prime minister and leader of the National Movement for the Development of Society, Seini Oumarou.

The S.I. describes Issoufou’s inauguration as “an historic moment for Niger, and a sign of great hope and optimism for the people of that country.”

The Socialist International has “on several occasions during the last years held meetings and activities in Niamey, the capital of Niger, one of the poorest countries in the world, hosted by the PNDS and Mahamadou Issoufou. Equally, President Issoufou has participated regularly in the activities of the International elsewhere in Africa and in other parts of the world.”

“Start by doing what’s necessary; then do what’s possible; and suddenly you are doing the impossible.”

Friends, this is an extremely time-critical call for action. As many of you know, Wisconsin has been ground zero in the conservative fight to take back our country. When Governor Scott Walker decided to get serious about controlling run-away government spending, the left decided to make Wisconsin the big stand against the tea party conservatives. When their walk-out of State Senators didn’t work, they went to court. And then they dropped a surprise bomb of $3 million to take over the Wisconsin Supreme Court. We won, but they are trying to steal this victory away from us.

Thanks to many of you who jumped in to help, we were able to get television ads up in just a couple of days for the state Supreme Court Election last Tuesday, in which the conservative Justice David Prosser beat his liberal activist challenger by around 6,000 votes. Big national unions have spent millions of dollars on attack ads trying to smear Justice Prosser, and aren’t ready to accept election results and their defeat. Now the unions are funding a full statewide recount of the ballots, and have hired Al Franken’s attorneys to reverse the election results like they did in Minnesota. This race has become much bigger than just the two candidates – it is in fact a battle between big-government, entitlement addicted liberals, and conservative leaders trying to restore fiscal sanity.

Wisconsin is in urgent need of both attorneys and non-attorneys to come to the state and help oversee the imminent recount and provide needed ballot security. Wisconsin has 72 counties plus the City of Milwaukee, so the task is large, and the stakes couldn’t be higher. If successful, the upside for the country is enormous. But if we allow union money and Al Franken’s lawyers to steal this election, it will send a shiver of fear down the spine of every Governor in this country, and few will have the political willpower to ever challenge public employee unions again.

The Tea Party Express (www.TeaPartyExpress.org) is calling on our conservative friends to step up right now, because the other side has already stepped up and is putting their plan in motion. It’s going to take all of us to win this fight. The recount will begin as early as Friday, April 15, though more likely Monday, April 18. Nothing like this has ever been undertaken in Wisconsin, and it’s going to take a willing army of volunteers throughout the state.

Will you help save America from the clutches of the old-world, politically entrenched union bosses? Much is at stake, and what happens in Wisconsin will echo across the nation.

For more details about volunteering whether you are an attorney or not, follow this link: http://tinyurl.com/WIVolSignup.

If you can spend a few days in Wisconsin, it can mean the difference between preserving this great victory and having it taken away from us by the left-wing activists that are already there. We thank each one of you for helping with this fight!

The masks are coming off. Game on…