Every Western country has its “5th Columnists” – including mine. 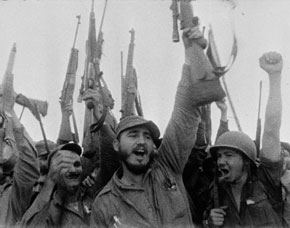 Wellington, Apr. 15 New Zealanders and Latin Americans on Friday honored the heroes and martyrs of Playa Giron (the Bay of Pigs), and celebrated the historic victory of the Cuban people against that invasion organized, armed and financed by the United States 50 years ago.

Speakers referred to the heroism and determination shown by the Cuban people during the invasion.

The victory in Bay of Pigs has a historical relevance because it represented the first major defeat of the U.S. imperialism in Latin America, Locke said.

First of all, this man is a travesty in the sight of God. He is blasphemous. Second, don’t you believe what he is saying for a minute. It is misdirection and a false flag. He excels at lying.

Ten hour siege, a SWAT team… and a TANK: How police dealt with mother who refused to give her child medication