Every news source and pundit has already put in their “two cents worth” regarding Obama’s proposed budget fix; why the need for one more? Maybe if I added a little humor to the mix some on the left might grasp what we conservatives are trying to say; at least that’s better than getting hostile.

Obama gave us his grand assessment; this budget will be a “Framework for Shared Prosperity and Shared Fiscal Responsibility.” In my conservative right minded thinking that’s, “take from the rich and give to those less fortunate;” in other words, socialism. Obama plans to raise taxes on the wealthy by a trillion dollars to make up for irresponsible spending. Yea, that’s hilarious.

I actually got an email from a leftist “FaceBooker,” ( is that a word, FaceBooker?), requesting I join a “Day of Fasting — To Shame the Shameless — Republican Budget.” If it weren’t so pathetic, I would have laughed. I can only assume the reference was to Rep. Paul Ryan’s budget proposal, the only serious attempt to keep our nation solvent. I’ll sing a few bars of Kum-By Ya; will that suffice?

While working as a police officer I’d often be assigned to make burglary reports. Folks would get home from a long day at work and find the back door had been kicked in; their stereo, computer, television and a few personal items had been taken. They’d call the dispatcher and ask for an officer to fill out a report; a couple of hours later, after the serious calls had been taken care of, a patrol car would stop by. (Did you catch that, burglary is not considered a serious call unless bad guys are still in the house. Are you rolling on the floor in a fit of laughter yet?)

At first they were shaken up, then as we filled in the report they’d become “distanced” as they thought about the items which they no longer controlled. Finally they became angry at those who’d broken in and taken a part of their lives.

“You should be ashamed of yourself. That burglar is depending on you. How’s he gonna’ buy enough rock cocaine with such measly pickins’?” I’d explain how important it was to do a better job, work longer hours and accumulate more expensive items for the burglars to steal.

At first they’d give me a wide eyed stare, as if to say, “What the heck?” I’d give them half a smirk; letting them know I was pulling their leg. The reality of it all, I was more right than wrong.

“Yea, burglars wouldn’t have to break into near as many houses if you’d hand over better quality stuff. That cheap television will only get them a few bucks at the pawn shop so they’ll have to break into one of your neighbor’s house just to make ends meet.” I’d laugh at my preposterous remark until the complainant understood my sarcasm. They’d take in a deep breath, let it out and realize there was a particle of truth; if the bad guys scored big enough they’d take a day off now and then.

Once in a while I’d hear, “Burglars aren’t much different than the government; I do all the work and they take all the good stuff.” The problem with such a statement; it’s not true. Most burglars only break into your house once and move on to another while government keeps coming back for more and never stops.

I grabbed an old chart somebody else posted on the internet showing who pays taxes by income groupings, a chance to bring up wealth or class envy. More importantly, it shows those evil rich people are only paying 40% of the entire nation’s taxes. They should be ashamed of themselves for not working hard enough, not providing the government with sufficient reserves to cover each and every entitlement program concocted. 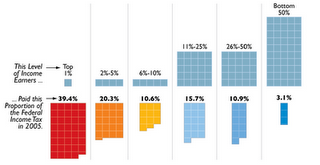